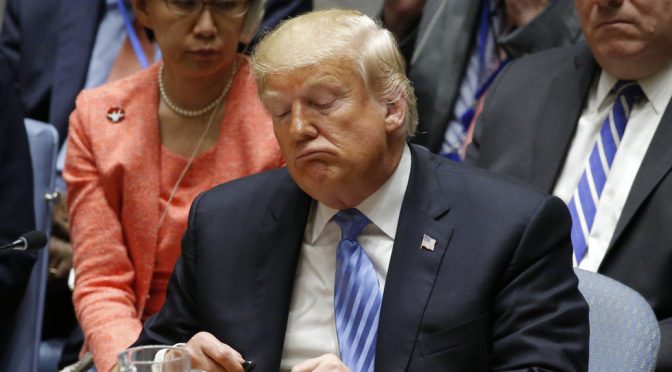 As we already know by now, Donald Trump suffered significant losses worldwide when his duly-approved false flag operation against Iran did not gain any traction, as the victims, the Norwegian-owned ‘Front Altair’ and the Japanese-owned ‘Kokuka Courageous in this case, didn’t buy the White House narrative.

He must recover from the fallout all too quickly to keep his support base, which is very critical for the 2020 elections.

His patent arrogance dictates that he can throw some bones around, and the Americans will surely thank him for it because it’s so rare for a sitting US president to acknowledge the fact that it was not Iraq, which sent its amateur pilots to the World Trade Center towers that killed more than 3000 civilians in September 11, 2001.

Yet, what does it matter what he knows, when those that did it are still roaming free around the farm?

Ironically, both the WTC911 and the Oman Gulf events are all false flag operations. But trust The Q Plan, we are told… that this is a 4D strategy which can only be successfully implemented through a man like him.

“Given the cooperation between the Islamic Republic of Iran and other countries in creating an ‘international organisation to counter American espionage’, we provided our partners with information that led to the disclosure and dismantling of a network of CIA officers, as well as detention and punishment of several spies in different countries”, the senior official said.

Shamkhani added that since some aspects of the case have already been disclosed by the CIA itself, the Ministry of Intelligence can also publish the documents.

The development comes a few days after Iran urged the United States to cease “warmongering” and false flag operations in the region after Washington accused Tehran of being behind attacks on two oil tankers in the Gulf of Oman.

Not use to accepting failures, the Pentagon under Acting Secretary of Defense Patrick Shanahan is sending 1000 troops to “address air, naval, and ground-based threats in the Middle East.”

Sources from the UN said that the US is actually planning a “tactical assault on Iran” in response to the failed Gulf of Oman false flag. The UN officials claimed that “the Trump administration has been holding non-stop discussions involving senior military commanders and advisers to President Donald Trump since Friday, the Jerusalem Post reported.”

Interestingly, China warned the US against such military deployment. Speaking from Teheran, Chinese State Councilor Wang Yi made the remarks during a joint press conference with Syrian Foreign Minister Walid al-Muallem in Beijing on Tuesday.

“We call on all sides to remain rational and exercise restraint, and not take any escalatory actions that irritate regional tensions, and not open a Pandora’s box,” he said. “In particular, the US side should alter its extreme pressure methods.”

What we see from looking at the big picture is a cadre of  desperate corporate thugs who are no longer in control of the globalist economy that they have designed, incubated and profited heavily from, for decades.

They’ve all been defeated by China, India and Russia at their own game. Now, these countries are poised to assert their rightful place under a multipolar world economic order that promotes creativity rather than the endless destruction of much older cultures.

Remember this day too, when the Prime Minister of Japan categorically disagrees against his US bosses’ position regarding the Iranian issue, and has demanded for more evidence about the recent false flag operation. [Which make us wonder why Ben Fulford dislikes Shinzō Abe.]

This unprecedented move by Japan only suggest that in the end, the Deep State will be defeated, but no thanks to Trump. He is deep in bed with them.

Trump is not the leader of the American Resistance against corporate tyranny that have plundered America, and the rest of the world, for a very long time.

The true American Resistance is consist of ordinary people, who are tirelessly spreading the truth around without expecting any form of compensation, because they know that they have to do it.

The rest is just false idolatry.