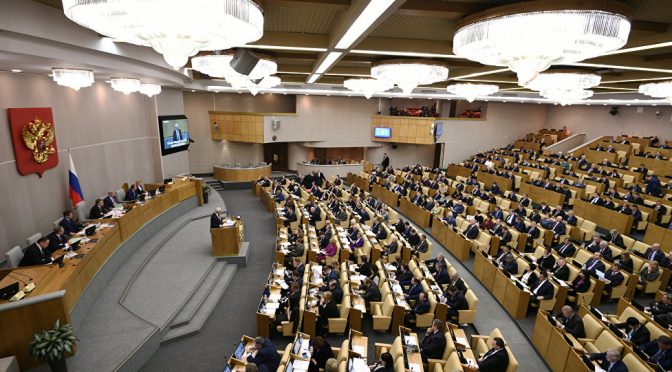 Just a few days ago, the Russian State Duma overwhelmingly passed Vladimir Putin’s resolution to withdraw Russia’s obligations from the INF Treaty that was signed between Ronald Reagan and Mikhail Gorbachev on 8 December 1987, that paved the way for the reunification of Germany, and the subsequent collapse of the USSR.

With 92.7% in favor of the resolution, the Russian lawmakers voted to support a decree by President Vladimir Putin to suspend the country’s participation in the 1987 Intermediate-Range Nuclear Forces (INF) Treaty, which eliminated an entire class of missiles.

The State Duma in Moscow overwhelmingly supported Putin’s move in a vote on June 19, with 417 deputies in favor and one abstaining.

The upper house of parliament is expected to consider the bill, which allows the president to resume the treaty’s implementation at his discretion, on June 26.

This is a tit for tat response to Trump’s unilateral withdrawal from the INF treaty and is tantamount to an official Russian acceptance of a new Cold War between America and Russia.

Although the politicians from both sides deny that this will initiate a new arms race, but it’s the most expected outcome of such a situation.

13 thoughts on “Cold War 2.0 Officially Accepted by the Russians”