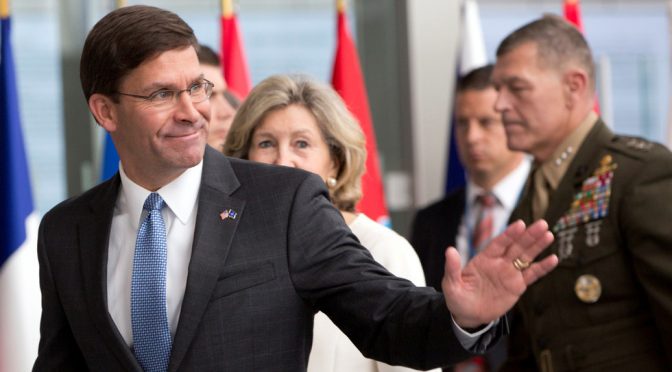 US President Donald Trump continues to surround his administration with people who – when it comes to the issue of China – will be nothing but “yes men” who agree entirely with his administration’s policies towards Beijing.

For someone who platformed his election campaign on ending unnecessary wars and focusing more on making his country “great again,” Donald J. Trump sure does voluntarily opt to appoint some of the most hawkish people who exist in Washington’s circles as part of his advisory team. I could write an entire essay on this fact alone, but the infamous past of the likes of John Bolton, Mike Pompeo and Elliot Abrams is fast becoming common knowledge anyway.

Trump’s latest warhawk, who appears all set to enter the fray which has to be one of the most cursed administrations of all time, is Mark Esper, currently the Army’s civilian chief. Esper is Trump’s favorite to lead the US military, following the resignation of James ‘Mad Dog’ Mattis some time ago. Apparently, no one is “mad dog” enough to keep up with Donald Trump.

Esper has had a specific focus on China for decades (or so he says). According to Reuters, Esper said he saw China as a personal priority as far back as the 1990s, dating back to when he worked as an aide on Capitol Hill after serving over ten years in the army.

“The issue of China, competition with China, China’s capabilities, is not a new one to me … That is both the foundation and the shaping of my views on these various issues, because I’ve watched this evolution for 20 years now,” Esper said, further noting he was a Pacific war planner on the Army staff, in the mid-1990s.

So, what would a US military run by Esper look like in the near future?

Last year, at a Foreign Policy event at Brookings, Esper explained his vision for the future of the US military moving forward. After explaining that his personal mantra is “the only way human beings can win a war is to prevent it … the best way to prevent a war is to be prepared to win it,” Esper went on to explain how – in order to counter Russia and China – the US military would have to grow the regular army above 500,000 soldiers, among a host of other things.

It is worth noting at this point that Bolton himself is also fond of quoting a similar ancient Roman battle philosophy being: “if you want peace, prepare for war” (but I am sure this is just a coincidence).

“One of the most dangerous places is high-intensity conflict. That’s where we could [have] a major war, and it would have a very significant impact on the United States,” Esper also recently told the Washington Examiner. “So we have to build an army, a military, if you will, that’s capable of dealing with, again, Russia or China, because we know that over the last 18 years as we focused on Iraq and Afghanistan, the Russians and Chinese focused on modernizing their force and trying to close the gap with the United States. That’s what has our attention right now.”

Despite this focus on China, it wouldn’t be too hard to determine where Esper’s loyalties will ultimately lie in the long run. In the not-so-distant past, Esper spent seven years as vice president for government relations at defense contractor Raytheon – where he made millions.

In his soon-to-be confirmed role as defense secretary, he is likely to have the ultimate decision over which weapons the Pentagon buys. That being said, recently resigned acting defense secretary Patrick Shanahan was a longtime executive at Boeing – further demonstrating how spoiled for choice America’s democracy really is.

Esper also served in the 1991 Gulf War as an infantry officer earning a Bronze Star, signalling that his entrenchment within the US war machine runs almost as deep as one can go. Not to mention that in 1986, he and Pompeo went through the US Military Academy together. Even in light of the monumental legal hurdles that should sit in Esper’s way before he can technically take up the seat of US defense secretary, it appears that Esper is already getting first-hand exposure to the Trump administration. In fact, Esper was allegedly at the White House last Thursday for meetings with the US president over how to respond to Iran’s downing of a US military drone. If the current US-Iran spat escalates further, we may be witnessing a touch of what Esper will bring to the US foreign policy establishment.

News of Esper’s nomination comes at the same time that the US joint chiefs of staff announced a new nuclear doctrine which entails the Pentagon believing that using nuclear weapons could “create conditions for decisive results and the restoration of strategic stability.” A nuclear operations doctrine published during the administration of George W. Bush also helped pave the way for pre-emptive nuclear strikes and the use of the US nuclear arsenal against a widened range of targets.

The Pentagon is also notably expanding its rivalry with China to include a new arms race located in space. In a new threat assessment of China’s military, the Pentagon cites “space” 86 times warning that the Chinese military is working on “enabling long-range precision strikes” and developing directed-energy weapons for use in outer space.

For Beijing’s part, a top Chinese major general who co-authored a book entitled: Unrestricted Warfare: China’s Master Plan to Destroy America has warned that US leaders preparing for an arms race in space should be prepared to lose.

“China is not the Soviet Union,” he said in an interview with the South China Morning Post (SCMP). “If the United States thinks it can also drag China into an arms race and take down China as it did with the Soviets … in the end, probably it would not be China who is down on the ground.”

At the end of the day, if the US wanted to avoid a conflict with a nuclear power like China, one would have to envision that it could at least take more precautionary measures to avert such a catastrophe. Refraining from nominating people like Esper, who are to work closely alongside established warhawks like John Bolton and Mike Pompeo, would be a good start in this direction. While not often talked about, Bolton has been a big advocate for pushing back against China and even going so far as allegedly challenging Beijing’s One China policy on Taiwan, a move which could also lead to war.

As director of programme planning at the Secure World Foundation Brian Weeden astutely noted: “one of my biggest concerns is that for all the talk about how horrible an armed conflict with China would be for everyone, all the current policies and actions seem to be preparing for armed conflict instead of avoiding it.”

However, avoiding conflict is just simply not on Esper’s agenda. But don’t take my word for it:

“My first priority will be readiness – ensuring the total Army is prepared to fight across the full spectrum of conflict,” Esper said before the Senate Armed Services Committee in November 2017. “With the Army engaged in over 140 countries around the world, to include combat operations in Afghanistan and Iraq, training rotations to Europe to deter Russia, and forward deployed units in the Pacific defending against a bellicose North Korea, readiness must be our top priority.”

Darius Shahtahmasebi is a New Zealand-based legal and political analyst who focuses on US foreign policy in the Middle East, Asia and Pacific region. He is fully qualified as a lawyer in two international jurisdictions.