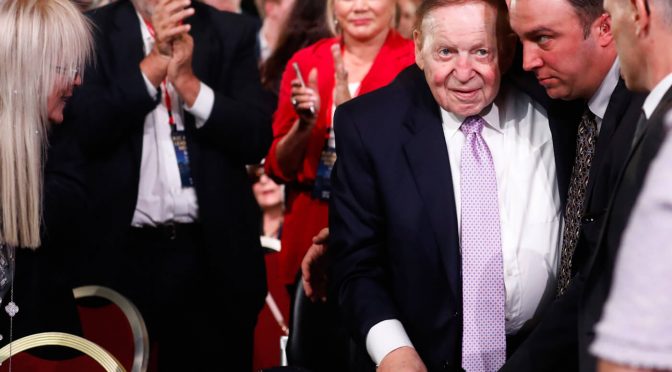 America is controlled only by its wealthiest, and they are solidly in control of both political Parties. However, now that they are in control, they are fighting bitterly amongst one-another. They are on two sides.

by Eric Zuesse for The Saker blog

Actually, all  billionaires are conservatives, because they need to be that, in order to call a country like America “democratic” instead of “dictatorial,” and they need that myth of American ‘democracy’ in order to prevent a revolution, which would strip them of their power. (No American billionaire calls America a “dictatorship,” even though it is and each of them knows it, since they collectively are the dictators here, and since they don’t become involved in politics, at all, unless they want to remain in control over it.

The richer a person is, the more conservative the person tends to be, and billionaires are the richest people of all, so all of them are actually conservatives. Even billionaire liberals are conservative, because otherwise the individual would be fomenting revolution, and none of them is doing any such thing — what would they be revolting against, if not themselves?

They can pretend to be progressive, but only pretend. Furthermore, every study shows that the richer a person is, the more involved in politics the person tends to be. Poor people are the least involved in politics, and this is one of the reasons why the U.S. is a dictatorship. It’s a dictatorship by the richest, and throughout thousands of years that has been called an “aristocracy,” as opposed to a “democracy.”

The first scientific study of whether the U.S. is a dictatorship or a democracy was published in 2014 and it found that America is a dictatorship and that its richest are in control over it. Only wealth and political involvement determined whether a person’s desired governmental policies get passed into law and implemented by governmental policies, the researchers found.

Furthermore, “The preferences of the average American appear to have only a minuscule, near-zero, statistically non-significant impact upon public policy.” Consequently, the public’s desires are actually ignored  by the American Government. It’s not responsive to what the public wants; it is responsive only  to what the politically involved super-rich — the people who mainly fund politics — want. And those billionaires also control, or even own, all of the major ’news’media, and so their propaganda filters-out such realities as that the country is a dictatorship, no democracy at all.

When the Democrat Obama negotiated and signed the multinational pact in which Iran guaranteed that it would produce no nuclear bombs and the U.S. and its allies would end their sanctions against Iran, the reality became clear that Obama didn’t actually hate Iran (which the Republican Trump clearly does).

The main personal difference between Obama and Trump (other than that Obama was intelligent and Trump isn’t) is that Obama was a much more skilled liar than Trump is. For example, he was able to string Vladimir Putin along until 2012 to hope that Obama’s ‘reset with Russia’ wasn’t merely a ploy.

On 26 March 2012, Obama informed Dmitry Medvedev to tell Putin that “On all these issues, but particularly missile defense, this, this can be solved, but it’s important for him [the incoming President Putin] to give me space. This is my last election. After my election, I have more flexibility.” However, it was all a lie.

The fact is that, already, Obama was actually planning, even as early as 2011, to overthrow the neutralist Government right next door to Russia, in Ukraine, and to replace it with a rabidly anti-Russian regime on Russia’s doorstep, which he was planning to bring into NATO even though only around 30% of Ukrainians wanted Ukraine to join NATO.

But Putin had no way of knowing that Obama was planning this. And immediately after Obama’s February 2014 coup in Ukraine, around 60% of Ukrainians suddenly wanted Ukraine to join NATO. (That’s because the newly installed Obama regime propagandized hatred against Russia.) Obama won Ukraine as being an enemy of Russia; it’s as if Putin had wrangled a coup in Mexico and suddenly Mexicans turned rabidly hostile toward the U.S.

But it was a Democrat who did this, not a Republican. And the Republican Trump is just as hostile to Iran as Obama was to Russia. These aren’t foreign governments that are interfering in America’s foreign policies; maybe Israel is doing that, and maybe Saudi Arabia is, and maybe UAE is, but certainly America’s 585 billionaires are. And they are allied with those three Middle Eastern countries.

15 thoughts on “The Civil War Now in America”