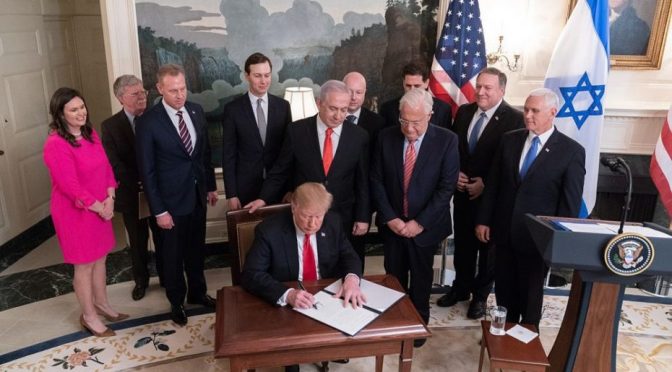 President Trump’s senior aide on Mideast affairs Jared Kushner tried last week to sell his much-vaunted “deal of the century” for a Palestinian-Israeli peace settlement. The core of it was a purported foreign investment plan worth $50 billion.

The sales pitch made at a conference in Bahrain amounted to a $50Bn bribe dangled at the Palestinians to accept permanent illegal occupation of their ancestral lands in exchange for foreign investment. Kushner rebranded it as the “opportunity of the century”.

He claimed that political peace depends on a viable economic plan. Others would see that formulation as back-to-front: economic development and prosperity depends on a political solution to decades of injustice against Palestinians.

American diplomacy has been an utter failure for decades with regard to settling this bitter dispute. It would therefore be impossibly naive to expect the Trump administration to succeed. More likely, its blundering and bias will only make this historic problem a whole lot worse.

That’s no doubt why so many regional players decided to give the Bahrain event this week a clunking big miss.

Like his father-in-law in the White House, Kushner comes from a real estate background before Trump appointed him as his top aide on the Palestinian-Israeli issue. For the past two years, Kushner has been working on a “master plan” to end the eight-decade-old conflict. That conflict has been at the center of most other disputes and tensions in the region. Trump has billed his son-in-law’s peace plan as the “deal of the century”.

In Bahrain, the Trump administration gave the first-ever preview of its peace plans. Skeptics of Kushner’s ability to deliver a realistic, workable framework were not to be surprised. The boyish-looking Kushner looked way out of his depth as he presented his vision of business and investment as the supposed key to peace. He invited the audience to “imagine” Palestinian territories in the West Bank and Gaza bustling with enterprise and trade. That entrepreneurial “promised land” would arrive if the Palestinians accepted Kushner’s vision of a $50Bn foreign investor fund.

What that boils down to is Palestinians accepting the present status quo of illegal occupation by Israel and in effect surrendering their historic claims for sovereign statehood. Moreover, the $5oBn in investments that Kushner was swooning about are not existing funds. They are only promises of potential investment, which may never actually be delivered.

Nowhere in the Trump administration’s “deal of the century” is there any attempt to redress historical violations of Palestinian national rights. There is no mention of the right of return of millions of Palestinians displaced by the 1948 war that established the sate of Israel. Nor of returning land annexed during the 1967 war. Illegal occupation is merely a fact on the ground that needs to be officially recognized as Israeli territory, according to the Trump administration. In the same way that Trump earlier this year officially recognized the occupied Syrian Golan Heights as part of Israel.

Kushner’s bias in a supposedly peace mediator role is flagrant. He is Jewish and a family friend of Israeli Prime Minister Benjamin Netanyahu. Kushner’s wife, Ivanka, Trump’s daughter, is a convert to Judaism. Last year, she personally unveiled the controversial new American embassy in Jerusalem, which Trump had promised to Netanyahu on his election in 2016 in recognition of the city as the capital of Israel. That move was seen by Palestinians as a betrayal of their historic claim to East Jerusalem as the capital of their future state.

During the past two years, the Trump administration has cut off development aid and diplomatic links with Palestinian authorities. Respected Palestinian negotiators like veteran envoy Hanan Ashrawi have been denied travel visas to the US. The consultation conducted by Kushner with the Palestinian side in formulating his peace plan has been minimal.

During a recent interview in the US, Kushner revealed his colonial-type mindset when he asserted that the “Palestinians were not ready yet for self-government”. In other words, in this supposed mediator’s view, he is saying that there will be no foreseeable state of Palestine. That is, the Palestinians must accept their inferior status as an occupied people while the state of Israel is permitted to continue annexing more and more of their ancestral land. Indeed, Kushner is believed to have personal business investments in the construction of new Israeli settlements in the occupied territories.

It’s no wonder then than his so-called “deal of the century” amounts to a shallow business plan bereft of any deep historical, political issues. Palestinians are expected to shut up and surrender their historic rights for statehood by accepting a quixotic vision of economic wonders descending on them while living under permanent marginalization and deprivation. A UN report last year found that Gaza will no longer be habitable in a few years due to water and power shortages.

The Trump-Kushner proposal is the sort of con job that real estate agents excel at. Everything is reduced to the value of money while prospects are talked up with the most ludicrous glamor. Unscrupulous real estate agents would have the temerity to sell a cardboard box as if it were a penthouse suite. Trump and his son-in-law would seem to be of that same wheeler-dealer ilk.

After two years of bragging about its big Middle East “vision”, what people saw this week was little more than a glossy brochure of hype over historical realities. Indeed, it would seem that the purpose of the hype is to bury the hard historical problems that underly the Palestinian-Israeli conflict. The excessive emphasis on billions of dollars of investment by Kushner is an attempt to seduce Palestinians into relinquishing their political and moral rights.

This week, however, while the Trump administration was making its sales pitch in Bahrain, it was notable that there was no Palestinian delegation present. All across the West Bank and Gaza, Palestinians shut their businesses in protest and took to the streets to burn effigies of the “deal of the century”.

Israeli government representatives were also not in attendance. That was only after the White House belatedly pulled their invitations in the weeks before the Bahrain conference took place. No doubt that hasty move by the White House was meant to minimize the embarrassing spectacle of a Palestinian boycott by also not having an official Israeli delegation.

Russia and China also gave the Kushner presentation a miss. Some Arab countries, such as Iraq and Lebanon, did not attend either. Iran, a major regional player and supporter of the Palestinian cause, was not represented. The European Union sent only technical-level officials; EU foreign policy chief Federica Mogherini was not present.

The glaring absences reflect the lack of international credibility of this White House’s peace efforts for the Middle East. The “deal of the century” is more seen as the “con of the century”.