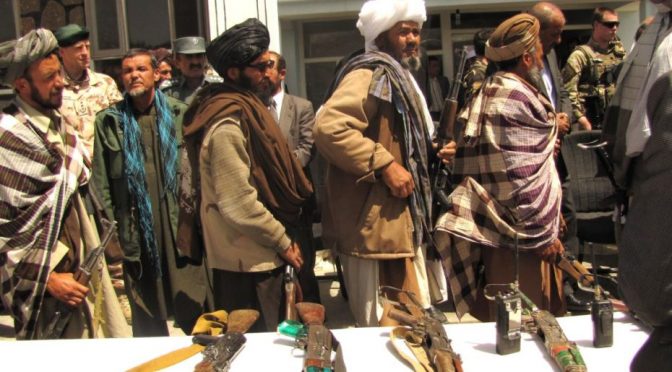 On June 26 two US special forces soldiers were killed in Afghanistan, bringing the total of US military personnel who have died in that useless war to 2429, according to iCasualties, an independent casualty tracker.

No matter what one might think about the rights and wrongs of the war in Afghanistan, it is sad to record such fatalities, and the question that comes to mind is: What did they die for?

According to the US State Department the military are there because “we continue to invest US resources to help Afghanistan improve its security, governance, institutions and economy,” and the Pentagon says “the principal goal… is to conclude the war in Afghanistan on terms favourable to Afghanistan and the United States.”

Neither the current occupant of the White House nor any others aspiring to become president in 2020 have produced any workable proposals to end this disastrous conflict, and in an exchange of views on June 27 two of the Democratic contenders cast some light on the darkness of frustration and confusion. Members of Congress Tim Ryan and Tulsi Gabbard had a heated argument that involved Gabbard (who had served in Iraq) declaring that “The Taliban was there long before we came in; they’ll be there long before we leave. We cannot keep US troops deployed to Afghanistan thinking that we’re somehow going to squash this Taliban.” Even if she didn’t offer a solution, she is perfectly right — but it was the rejoinder of Congressman Ryan that was eye-opening. He said “I didn’t say squash them. When we weren’t in there, they started flying planes into our buildings.”

Gabbard was astonished, as well she might be, and replied “The Taliban didn’t attack us on 9/11; al-Qaeda did. That’s why I and so many other people joined the military — to go after al-Qaeda. Not the Taliban.”

Exactly. But Ryan’s demonstration of ignorance is disturbing to put it mildly. If a Member of Congress actually believes that the Taliban flew planes into New York buildings and the Pentagon on 9/11, then the Democratic Party has serious problems. Certainly, Mr Ryan will never be president, but the point is that his ignorance of history is reflected widely throughout America. (With one example being Trump’s observation in his Independence Day speech that there were airports in America in 1775.)

Fifteen of the 19 al-Qaeda hijackers were Saudis, two came from the United Arab Emirates and one each from Lebanon and Egypt. USA Today reported that they had “multiple links to associates of Saudi Arabian Prince Bandar, the former longtime ambassador to the United States. The documents show possible conduits of money from the Saudi royal family to Saudis living in the United States and two of the hijackers in San Diego. The documents also indicate substantial support to California mosques with a high degree of radical Islamist sentiment.” Not a Taliban in sight. In spite of the fact that the head man, the evil bin Laden, was in Afghanistan (and was later killed in Pakistan in a US special forces raid) the main 9/11 planning centre was in Hamburg.

And it was intriguing that Gabbard played the Afghanistan card, because as Jeffrey St Clair notes in Counterpunch, she “volunteered to go kill people in Iraq in 2004, a year after the massacre at Fallujah and the ‘casus belli’ of the war had been revealed to be a hoax, which is like signing up for a tour of duty in Vietnam after My Lai and the release of the Pentagon Papers.”

Neither of the presidential contenders had anything to say about the increasingly appalling human situation in Afghanistan, but we do get some indication from the New York Times which has a weekly ‘War Casualty Report whose record of events is sobering, although, as the NYT points out, understandably incomplete.

For the week June 28 to July 4, for example, it notes that “At least 264 pro-government forces and 58 civilians were killed in Afghanistan during the past week, the highest death toll of 2019. Attacks by the Taliban spiked around the country as American negotiators met with Taliban officials in the seventh round of peace talks in Doha.” In addition to roadside and car bombings, the Taliban mounted forty ground attacks on government forces. We’re approaching the end of Phase Two of Chairman Mao’s three phases of revolutionary war.

The Special Inspector General for Afghanistan Reconstruction (SIGAR), Mr John Sopko, reported to Congress on April 30 that, among other things, the NATO-run Resolute Support Mission in Afghanistan “is no longer producing its district-level stability assessment of Afghan government and insurgent control and influence.”

The Pentagon has refused to provide such information for over a year, and Mr Sopko was reported by the Military Times on 1 May 2019 as saying “I don’t think it makes sense. The Afghan people know which districts are controlled by the Taliban. The Taliban obviously know which districts they control. Our military knows it. Everybody in Afghanistan knows it. The only people who don’t know what’s going on are the people who are paying for all of this, and that’s the American taxpayer.”

That sums it up: when the US military establishment knows that things are going downhill, they do their best to keep citizens in the dark. They refuse to admit that the situation in Afghanistan is out of control of the US and the Afghan government in Kabul, even when it is blindingly obvious that there is chaos and that, for example, as Mr Sopko points out, “As of March 11, 2019, most Afghan households faced acute food insecurity — meaning they were likely to suffer acute malnutrition or be forced to deplete assets to meet minimum needs.”

This is unlikely to cause concern in Washington, where official policy on treatment of illegal migrant children is inhumane to the point of criminality. New York magazine reported that in one prison camp in Texas 351 children had been separated from their families and “100 were under 13, and the youngest was just over 4 months… many of the kids had been held for three weeks or longer” in the most dreadful physical and mental state. So there won’t be much compassion for starving kids in Afghanistan.

Not that the Taliban are humane do-gooders. Far from it. They are barbaric and unthinkingly savage and have no regard for human rights. Their treatment of women is worse than mediaeval and their idea of governance is to install sharia law, which is a thoroughly retrogressive jurisprudence. But this is what eighteen years of war have brought to the top in that historically chaotic country.

The most significant recent indicator that the Taliban are ascendant has been their killing of these two US special forces soldiers in a classic firefight. Afghanistan isn’t supposed to be like this, because of the vast US airpower available to strike insurgents, wherever they may be. It is astonishing that the Taliban were able to attack in this fashion. No details of the firefight have been given, which is not surprising, given official policy of concealment of awkward facts, but that the engagement took place at all is a most serious sign that the Taliban have got the initiative.

The current series of negotiations might produce some sort of agreement between the US and the Taliban, but there is no representation of the Kabul government at the talks. Nobody knows whether President Ashraf Ghani will accept a US-Taliban agreement, but that is verging on the irrelevant because the Taliban only need to sit him out. They have already won in Afghanistan.

Brian Cloughley is a British and Australian armies’ veteran, former deputy head of the UN military mission in Kashmir and Australian defense attaché in Pakistan

6 thoughts on “The Taliban Have Won in Afghanistan”