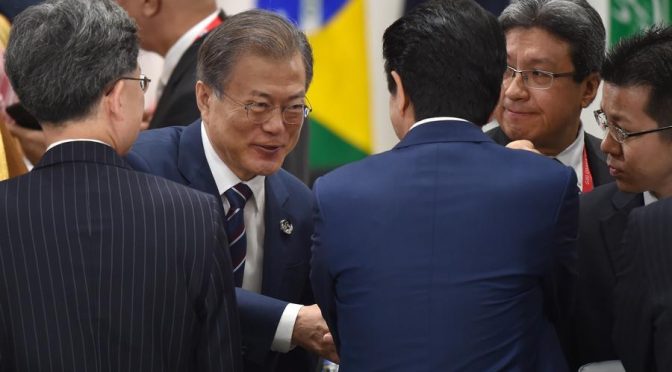 While Americans become increasingly preoccupied with their own domestic descent into dysfunction and political civil war, the rest of the world moves on without them.

The United States is not responsible for much of what we see happening in the world, but the consequences of American retreat from leadership are visible and disturbing. Nowhere is that more evident than in East Asia.

At one moment, we are witnessing multiple challenges to the international order that has maintained peace and stability in the region. Japan and South Korea, the anchors of the American security system, are now locked into a political and economic war without any end.

China and Russia staged an unprecedented joint air patrol right down the heart of the Sea of Japan, simultaneously challenging South Korea, Japan and the United States. North Korea tested a new short-range ballistic missile system, with a message aimed at the US-South Korea military alliance and the happy talk about a new Trump-Kim bargain.

Meanwhile, off in the corner, the Chinese regime is letting both Taiwan and Hong Kong know that the days of “one country, two systems” are almost over.

The Japan-South Korean tensions continue to ratchet upwards. Yesterday at the meeting of the World Trade Organization in Geneva, the two governments exchanged nasty accusations over Japan’s export control measures aimed at supplies of key chemicals from Japanese firms to Korean tech companies.

No talks are scheduled and Japan could move as early as next week to remove Korea from the “white list” that allows for simplified export procedures. Removal would potentially disrupt the entirety of bilateral trade. As the Wall Street Journal reports, American tech firms issued a warning that this “could wreak long-term damage across an already-buckling supply chain.”

Tokyo has massively miscalculated the response to these measures, hiding behind the transparently less than credible claim that this has nothing to do with the long-standing disputes over wartime history issues.

But the Moon Jae-in administration in Seoul lit the fire a year ago by tearing up the 2015 Comfort Women agreement and pushing the Korean courts to move ahead with a decision demanding compensation from Japanese firms for Korean forced laborers and their descendants, potentially a massive claim on the companies’ assets that would effectively cripple bilateral investment.

The impact on security relations is already clear. Quiet cooperation between the militaries of both countries, with US facilitation, was already impaired by an incident last December when a South Korean frigate painted a Japanese patrol aircraft with its fire control radar.

Privately American military officials in the region worry that an exchange of actual fire is now possible. Now Seoul is threatening to withdraw from the General Security of Military Information Agreement (GSOMIA), an intelligence sharing agreement that was brokered by the US. It provides a formal structure for very important cooperation, including the direct exchange of tracking data on North Korean ballistic missile firings.

The impact can be seen in the reaction to the Russian intrusion into Korean airspace and the Sino-Russian joint patrol. These should have been seen as serious challenge to both South Korea and Japan. Instead, both governments spent more time airing their rival claims to the islands that the Russians overflew.

Neither side shows any sign of desiring to bring this fight to a halt. The Moon administration mainly works to try to get the US to take its side. Threats to withdraw from GSOMIA are heavy-handed efforts to do this.

Just listen to the words of Hankyoreh, the leftwing daily close to Blue House: “The US continues to maintain a neutral stance on the South Korea-Japan conflict. But if the conflict continues and starts impacting military issues, the US will inevitably lose out. The South Korean government needs to keep hammering on such points to bring the US around to its side.”

The Japanese government, for its part, is also mainly making its case in Washington, counting on the Abe-Trump relationship to keep the Americans from intervening. Unlike Seoul, the Japanese don’t see US mediation as a goal.

But even Japanese foreign policymakers who blame Moon for this fight recognize the severe danger this represents and see little hope for a diplomatic outcome. “I am more inclined to be very pessimistic, and feel that unless and until the relations become much worse and a great many people realize that such a situation actually damages both of us, we cannot expect any improvement in our bilateral relations,” a senior Japanese foreign ministry official told me privately.

Meanwhile, as we know, the Russians and Chinese chose this moment to mount a joint air patrol of four aircraft, including Russian strategic bombers, on a route down between Japan and Korea.

“Such patrols will become a regular feature under a new agreement soon to be signed between Moscow and Beijing,” Dmitri Trenin, the astute analyst of this relationship at the Carnegie Moscow Center, wrote. “Russo-Chinese entente grows thicker.”

Trenin has argued in the past that this entente is not yet an alliance and both countries have different agendas and interests. But both share a common goal in diminishing the US presence and in establishing a new balance of power.

The conservative Seoul daily Chosun Ilbo pointed a finger at the Moon administration for encouraging both Russia and China “to ride roughshod over it” by seeking itself to overturn the Cold War order in the region that had previously united Japan, South Korea and the US against North Korea, China and Russia.

The North Korean regime sensed the same opportunity. The test of two new short-range ballistic missiles was meant to accompany a demand that Seoul back off from a planned joint military exercise with the US. At the same time, Pyongyang was sending a message to Washington that if Trump wants a deal to show off on the campaign trail, he will have to come bearing the gifts they demand.

The message was delivered in typical fashion – a sudden decision to call off a trip by North Korean foreign minister Ri Yong Ho to the ASEAN Regional Forum in Bangkok next week, where he was expected to meet Secretary of State Mike Pompeo.

As all these events were unfolding, National Security Advisor John Bolton and his Asia director Matt Pottinger traveled for two days to Tokyo and Seoul. There was an expectation, one fed by the NSC itself, that the administration was prepared to seriously intervene into the Japan-ROK dispute. “We’re on it,” this writer was told at senior levels.

Mr. Bolton did raise the issue in his talks in both capitals but he also decidedly avoided any talk of American mediation, on any level, preferring to tell both sides that they should settle their problems. This is not inconsistent with past American responses to these tensions.

“I’ve never had any expectation that Bolton was going to offer to mediate,” Evans Revere, former principal deputy assistant secretary of state for East Asia and the Pacific, told me. “My understanding is that the key task for him was to convey in both capitals that the current dispute between Seoul and Tokyo was undermining security cooperation in Northeast Asia, negatively affecting US interests, working to North Korea’s advantage – and that its continuation was not acceptable to the United States.

“In that context, Bolton was probably tasked with telling the Japanese and the Koreans to ‘fix’ it.” Revere believes that without any obvious solution to impose, the main goal was “to convince the disputants that there were limits to US patience.”

In the past, this might have had some effect. “That’s how the game has been played before,” a former senior US official told me, “though that doesn’t mean these guys know what they’re doing or care enough.”

One problem with the Bolton/Pottinger effort is that without the clear backing, in public, of the President or at least the Secretary of State, the private concerns conveyed by Bolton and Pottinger have limited impact. The President, as often happens, undercut them by telling reporters before they left that he had no intention to intervene in the conflict.

Second, simply telling the two sides to fix it ignores the fact that they have simply not shown themselves capable of pulling themselves out of the deep holes they have dug. There are steps that can bring this back from the brink – Japan should not remove Seoul from the white list; Seoul should agree to Japan’s proposal to create an arbitration panel under the 1965 treaty to deal with the dispute over compensation for forced laborers. The US should tell both governments to do this, in unambiguous, even angry, fashion.

Finally, Bolton muddied his message by focusing much more on his efforts to push Japan and South Korea to join in some unspecified, as yet, joint maritime security effort in the Persian Gulf.

The Japanese are highly reluctant to go down this road – it is politically very difficult given the requirement to seek parliamentary approval for any collective security mission and the Japanese believe their role is to encourage diplomatic negotiations between Iran and the United States, as Abe did last month in his visit to Tehran.

The South Koreans hinted they may be willing to join this new coalition of the willing, but for very cynical reasons. Not unlike the decision of the last progressive government to join the US war in Iraq, the Moon administration sees some value in using participation, however nominal, in a Gulf operation to leverage US backing vs Japan and for a new North Korea deal.

We are left now watching events unfold in East Asia in the absence of American leadership and a cogent strategy. All the actors – from Moscow, Beijing and Pyongyang to Seoul and Tokyo – feel that reality, and are proceeding on that basis. Meanwhile, Americans are mired in their own mess.

Stanford lecturer Daniel Sneider is also an associate editor of Washington’s Nelson Report, in which this article originally appeared.

What is pictured above is the ongoing transition away from the decades of Western interference in East Asia into a more independent statehood for Japan and South Korea, which is soon to be reunified with the North.

The efforts to divide and conquer both nations will continue, like some parts of the above article would show. But the past should not deter these countries from peacefully engaging in a mutually beneficial economic cooperation.

In fact, despite their differences, Moon and Abe have decided to resume their “shuttle diplomacy” as agreed in 2017 and hold a trilateral summit between Japan, South Korea and China as soon as possible.

That explains why both Russia and China made a simultaneous overflight between South Korea and Japan about a week ago to put the two countries on notice that any externally induced covert plans detrimental to peace in the region are never tolerated.

7 thoughts on “Northeast Asia Unraveling Amid US Retreat”