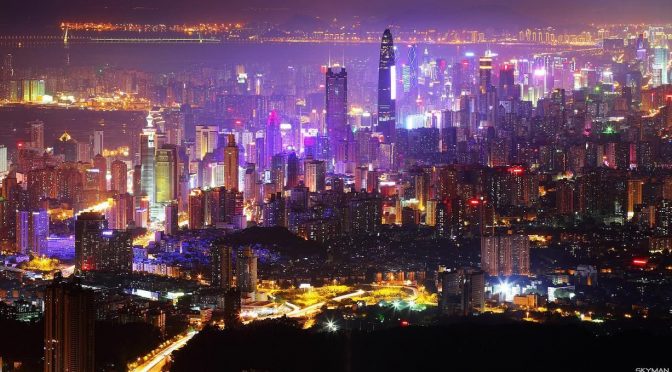 The “Two-Systems, One China” adopted format for the recovery of Hong Kong from the British in 1997 is under threat in recent months due to the ongoing CIA NED-funded protests and occupation of Hong Kong’s vital economic installations. But China is not running out of countermeasures just yet.

Beijing has released a new policy laying out its ambitions for Shenzhen City—located in Guangdong Province just across the border from Hong Kong—to become a world-class tech innovation city.

Media in Hong Kong are theorizing that it signals the Chinese regime’s intention to replace the city as a major financial hub.

The timing coincides with Chinese state media and the Hong Kong government’s recent statements admonishing Hong Kong protesters, and accusing them of disrupting the city’s economy as they stage mass demonstrations calling for a controversial extradition bill to be withdrawn.

China’s cabinet-like State Council released the policy on Aug. 18, in which it set the target for building Shenzhen into an “international innovation city” by 2025, a “model for the modernization of socialism” by 2035, and a “global benchmark city with competitiveness, innovation, and influence” by 2050.

To reach these targets, Beijing plans for Shenzhen to become the center for research and development in 5G telecommunications, artificial intelligence (AI), biomedical laboratories, and more, according to the document. Specifically, authorities will set up a new state-run institute for biomedical research called the Academy of Medical Sciences.

Beijing also plans to integrate the financial markets in Shenzhen, Hong Kong, and Macau. The Chinese city will then “open up foreign currency management” and lift some barriers to foreign investment. Currently, China has strict allowances on how much Chinese and foreign companies can exchange into foreign currency, and limits the percentage of foreign ownership at joint-venture firms.

Finally, Shenzhen will seek to attract foreign experts and talents by making it easier for foreigners to obtain residency visas, which would, in turn, allow them to become legal representatives of companies in China.

The document includes a section on the social credit system, explaining that the city would establish a “center for big data for the Guangdong Province, Hong Kong, and Macau area.”

Since 2014, Chinese authorities have begun rolling out a social credit system to monitor citizens’ activities, including online purchases and daily behaviors in public spaces, and assign them a “trustworthiness” score. Individuals with bad credit scores are banned from public services, such as boarding a plane or buying a train ticket.

Similar to Guangdong provincial government policy guidelines released in July, the Shenzhen plan alludes to a social credit system for Hong Kong and Macau, although Hong Kong officials have denied that such plans exist.

The new policy hints at Beijing’s desire to turn Shenzhen into a financial center capable of replacing Hong Kong, but an analysis by the Hong Kong Economic Times noted that would be difficult to accomplish, owing to Hong Kong’s flexible financial system and more complete legal and regulatory systems.

“Whether it’s Shenzhen or Shanghai, a precondition to replacing Hong Kong is that the city must have a free and open society that can protect human rights, rule of law, and does not have any controls on foreign capital and speech,” Xia said in an Aug. 19 interview with The Epoch Times. “Without this precondition, any plan will not succeed.”

Xia added that should the Party wish to achieve a Hong Kong-like free market system in Shenzhen, it would have to implement “one country, two systems,” the framework by which Hong Kong retains its autonomy despite Chinese sovereignty.

Meanwhile, U.S.-based commentator Jie Sen noted that this policy is a rare declaration from the Party that it wants to “demonstrate to the world that socialism can build the best city in the world,” Jie told The Epoch Times. “This is an ambition it has not displayed before.”

He believes that the timeline outlined in the Shenzhen policy is an indication of China’s greater plan for its socialist economic system to dominate the world.

On Aug. 20, the Shanghai government published a similar policy to Shenzhen’s, announcing a new “free trade zone” in the Lingang area, with easing of restrictions on residency visas, favorable tax policies, and more.

It is interesting to note that a lot of Western capitalists who have decades of field experience in China are saying that it is wrong to view the country as communist and repressive.

In a documentary released by the Stansberry Research, Shenzen is already surpassing Silicon Valley in terms of size, growth rate, and investments in research and development, like so:

Add to that is the slew of Trump tariff misfires that affected Apple in favor of Samsung, for example. This is just one out of many ways that China could hurt the US economy, and its military.

As the trade war continues to escalate, China is becoming increasingly active in Iran and is considering retaliating with what has long been described as the country’s ‘nuclear option’.

For the first of these projects – Phase 11 of the supergiant South Pars non-associated gas field (SP11) – last week saw a statement from the chief executive officer of the Pars Oil and Gas Company (POGC) that talks had resumed with Chinese developers to advance the project. Originally the subject of an extensive contract signed by France’s Total before it pulled out due to re-imposed US sanctions on Iran, talks had been well-advanced with the China National Petroleum Corporation (CNPC) to take up the slack on development. As per the original contract, CNPC had been assigned Total’s 50.1 percent stake in the field when the French firm withdrew, giving it a total of 80.1 percent in the site, with Iran’s own Petropars Company holding the remainder. At the same time, Iran was desperate to increase the pace of development of the fields in its oil-rich West Karoun area, including North Azadegan, South Azadegan, North Yaran, South Yaran, and Yadavaran, in order to optimise oil flows ahead of further clampdowns on exports by the US.

Beijing has yet another economic weapon to use against Washington in the escalating trade row – a possible embargo on vital rare earth metals needed to make everything from high-tech devices to fighter jets.

A routine visit by President Xi Jinping to a Chinese rare earths facility earlier this week came amid rising tensions between the two countries and shortly after the US turned up the heat on Chinese tech giant Huawei. Despite the lack of any official announcement from Beijing, the visit has triggered fears that China is ready to use the materials, specifically a ban on their export, as an advantage against the US.

“It could put heavy restrictions on the rare earth metals that are necessary to make all kinds of electronic equipment, especially phones. This is a significant threat because the West does not have its own supply,” he explained.

The minerals are unsurprisingly not included on the US list of $200 billion worth of Chinese goods facing higher import tariffs.

The only valid concerns about China’s technological rise is its efficient use of mass surveillance and cashless transactions. But if you look closely on how they are implementing it, you will realize how openly the government is doing it, compared to the clandestine way of using the same Orwellian technologies by its counterparts in the West.

For example, if you are crossing the street, you’ll know right off that you are being monitored because you can see yourself on the big screen just across the other side of the street. This is of course for purposes of deterrence, considering that if you misbehave, then a deduction to your social credit score will disable you the right to ride the high speed mass transit system, and have your dinner in an expensive restaurant.

Is this open to abuse?

Yes, absolutely. But is the Chinese government sharing the same characteristics as that of the West?

Does China have a Deep State that has no compunction of hurting its own people and the rest of the world’s population?

The charts below should answer those questions quite objectively.

Who in China would reject those figures?

Obviously, the Chinese culture is totally different from that of the “First World” countries, but that doesn’t give anybody the right to intervene on its internal affairs.

Conversely, what is applicable in China may not be the case in the West unless the exceptionalist Deep State is finally defeated.

When we criticize the West, we highlight its destructive foreign policies and unwarranted military interventions that didn’t improve, but rather worsen, the situation in those targeted “regimes.”

What the Chinese are doing is far from ideal, but it is constructive nonetheless as it does not seek the total extinction of the competition.

It is therefore our task to not only emulate, but to go beyond its own limitations given the opportunity to do so.