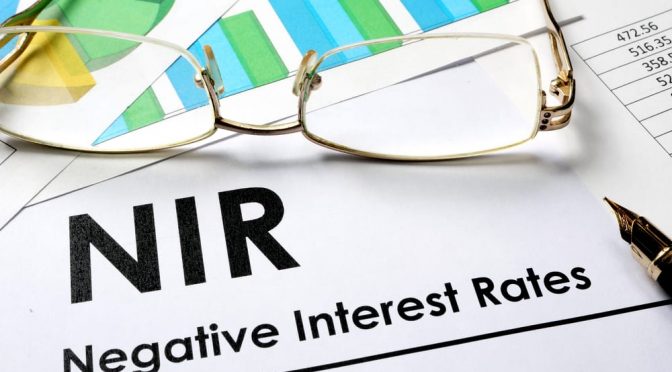 President Trump wants negative interest rates, but they would be disastrous for the U.S. economy, and his objectives can be better achieved by other means.

The dollar strengthened against the euro in August, merely in anticipation of the European Central Bank slashing its key interest rate further into negative territory. Investors were fleeing into the dollar, prompting President Trump to tweet on Aug. 30:

The Euro is dropping against the Dollar “like crazy,” giving them a big export and manufacturing advantage… And the Fed does NOTHING!

When the ECB cut its key rate as anticipated, from a negative 0.4% to a negative 0.5%, the president tweeted on Sept. 11:

The Federal Reserve should get our interest rates down to ZERO, or less, and we should then start to refinance our debt. INTEREST COST COULD BE BROUGHT WAY DOWN, while at the same time substantially lengthening the term.

European Central Bank, acting quickly, Cuts Rates 10 Basis Points. They are trying, and succeeding, in depreciating the Euro against the VERY strong Dollar, hurting U.S. exports…. And the Fed sits, and sits, and sits. They get paid to borrow money, while we are paying interest!

However, negative interest rates have not been shown to stimulate the economies that have tried them, and they would wreak havoc on the U.S. economy, for reasons unique to the U.S. dollar. The ECB has not gone to negative interest rates to gain an export advantage. It is to keep the European Union from falling apart, something that could happen if the United Kingdom does indeed pull out and Italy follows suit, as it has threatened to do. If what Trump wants is cheap borrowing rates for the U.S. federal government, there is a safer and easier way to get them.

The Real Reason the ECB Has Gone to Negative Interest Rates

Why the ECB has gone negative was nailed by Wolf Richter in a Sept. 18 article on WolfStreet.com. After noting that negative interest rates have not proved to be beneficial for any economy in which they are currently in operation and have had seriously destructive side effects for the people and the banks, he said:

However, negative interest rates as follow-up and addition to massive QE were effective in keeping the Eurozone glued together because they allowed countries to stay afloat that cannot, but would need to, print their own money to stay afloat. They did so by making funding plentiful and nearly free, or free, or more than free.

This includes Italian government debt, which has a negative yield through three-year maturities. … The ECB’s latest rate cut, minuscule and controversial as it was, was designed to help out Italy further so it wouldn’t have to abandon the euro and break out of the Eurozone.

The U.S. doesn’t need negative interest rates to stay glued together. It can print its own money.

EU member governments have lost the sovereign power to issue their own money or borrow money issued by their own central banks. The failed EU experiment was a monetarist attempt to maintain a fixed money supply, as if the euro were a commodity in limited supply like gold. The central banks of member countries do not have the power to bail out their governments or their failing local banks as the Fed did for U.S. banks with massive quantitative easing after the 2008 financial crisis. Before the Eurozone debt crisis of 2011-12, even the European Central Bank was forbidden to buy sovereign debt.

The rules changed after Greece and other southern European countries got into serious trouble, sending bond yields (nominal interest rates) through the roof.  But default or debt restructuring was not considered an option; and in 2016, new EU rules required a “bail in” before a government could bail out its failing banks. When a bank ran into trouble, existing stakeholders–including shareholders, junior creditors and sometimes even senior creditors and depositors with deposits in excess of the guaranteed amount of €100,000–were required to take a loss before public funds could be used. The Italian government got a taste of the potential backlash when it forced losses onto the bondholders of four small banks. One victim made headlines when he hung himself and left a note blaming his bank, which had taken his entire €100,000 savings.

Meanwhile, the bail-in scheme that was supposed to shift bank losses from governments to bank creditors and depositors served instead to scare off depositors and investors, making shaky banks even shakier. Worse, heightened capital requirements made it practically impossible for Italian banks to raise capital. Rather than flirt with another bail-in disaster, Italy was ready either to flaunt EU rules or leave the Union.

The ECB finally got on the quantitative easing bandwagon and started buying government debt along with other financial assets. By buying debt at negative interest, it is not only relieving EU governments of their interest burden, it is slowly extinguishing the debt itself.

That explains the ECB, but why are investors buying these bonds? According to John Ainger in Bloomberg:

Investors are willing to pay a premium–and ultimately take a loss–because they need the reliability and liquidity that the government and high-quality corporate bonds provide. Large investors such as pension funds, insurers, and financial institutions may have few other safe places to store their wealth.

In short, they are captive buyers. Banks are required to hold government securities or other “high-quality liquid assets” under capital rules imposed by the Financial Stability Board in Switzerland. Since EU banks now must pay the ECB to hold their bank reserves, they may as well hold negative-yielding sovereign debt, which they may be able to sell at a profit if rates drop even further.

Investors who buy these bonds hope that central banks will take them off their hands at even lower yields (and higher prices). No one is buying a negative yielding long-term bond to hold it to maturity.

Well, I say that, but these are professional money managers who buy such instruments, or who have to buy them due to their asset allocation and fiduciary requirements, and they don’t really care. It’s other people’s money, and they’re going to change jobs or get promoted or start a restaurant or something, and they’re out of there in a couple of years. Après moi le déluge.

Why the U.S. Can’t Go Negative, and What It Can Do Instead

The U.S. doesn’t need negative interest rates, because it doesn’t have the EU’s problems but it does have other problems unique to the U.S. dollar that could spell disaster if negative rates were enforced.

First is the massive market for money market funds, which are more important to daily market functioning in the U.S. than in Europe and Japan. If interest rates go negative, the funds could see large-scale outflows, which could disrupt short-term funding for businesses, banks and perhaps even the Treasury. Consumers could also face new charges to make up for bank losses.

Second, the U.S. dollar is inextricably tied up with the market for interest rate derivatives, which is currently valued at over $500 trillion. As proprietary analyst Rob Kirby explains, the economy would crash if interest rates went negative, because the banks holding the fixed-rate side of the swaps would have to pay the floating-rate side as well. The derivatives market would go down like a stack of dominoes and take the U.S. economy with it.

Perhaps in tacit acknowledgment of those problems, Fed Chairman Jay Powell responded to a question about negative interest rates on Sept. 18:

Negative interest rates [are] something that we looked at during the financial crisis and chose not to do. After we got to the effective lower bound [near-zero effective federal funds rate], we chose to do a lot of aggressive forward guidance and also large-scale asset purchases. …

And if we were to find ourselves at some future date again at the effective lower bound–not something we are expecting–then I think we would look at using large-scale asset purchases and forward guidance.

I do not think we’d be looking at using negative rates.

Assuming the large-scale asset purchases made at some future date were of federal securities, the federal government would be financing its debt virtually interest-free, since the Fed returns its profits to the Treasury after deducting its costs. And if the bonds were rolled over when due and held by the Fed indefinitely, the money could be had not only interest-free but debt-free. That is not radical theory but is what is actually happening with the Fed’s bond purchases in its earlier QE. When it tried to unwind those purchases last fall, the result was a stock market crisis. The Fed is learning that QE is a one-way street.

The problem under existing law is that neither the president nor Congress has control over whether the “independent” Fed buys federal securities. But if Trump can’t get Powell to agree over lunch to these arrangements, Congress could amend the Federal Reserve Act to require the Fed to work with Congress to coordinate fiscal and monetary policy. This is what Japan’s banking law requires, and it has been very successful under Prime Minister Shinzō Abe and “Abenomics.” It is also what a team of former central bankers led by Philipp Hildebrand proposed in conjunction with last month’s Jackson Hole meeting of central bankers, after acknowledging the central bankers’ usual tools weren’t working. Under their proposal, central bank technocrats would be in charge of allocating the funds, but better would be the Japanese model, which leaves the federal government in control of allocating fiscal policy funds.

The Bank of Japan now holds nearly half of Japan’s federal debt, a radical move that has not triggered hyperinflation as monetarist economists direly predicted. In fact, the Bank of Japan can’t get the country’s inflation rate even to its modest 2 percent target. As of August, the rate was an extremely low 0.3%. If the Fed were to follow suit and buy 50% of the U.S. government’s debt, the Treasury could swell its coffers by $11 trillion in interest-free money. And if the Fed kept rolling over the debt, Congress and the president could get this $11 trillion not only interest-free but debt-free. President Trump can’t get a better deal than that.

This article was first posted on Truthdig.com.

Ellen Brown is an attorney, chair of the Public Banking Institute, and author of thirteen books including Web of Debt, The Public Bank Solution, and Banking on the People: Democratizing Money in the Digital Age.  She also co-hosts a radio program on PRN.FM called “It’s Our Money.” Her 300+ blog articles are posted at EllenBrown.com. She is a frequent contributor to Global Research.

2 thoughts on “The Disaster of Negative Interest Rates”