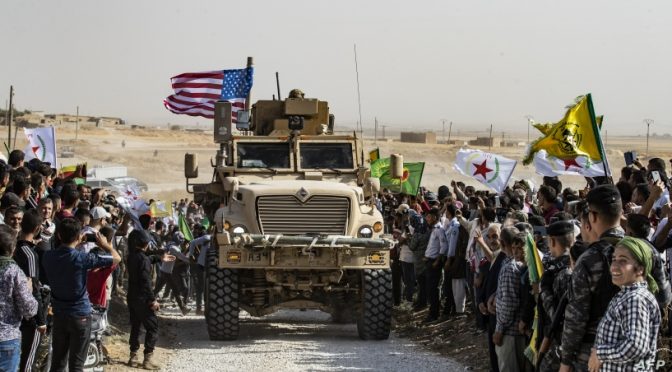 Last Friday a 155 mm artillery shell landed 300 metres from a US command post near the Syrian bordering city of Ayn al-Arab (known by the Syrian Kurds as “Kobane”) during an ongoing operation carried out by Turkey – a NATO and a US ally. This operation aimed to dislodge, at a distance of 30-35 kilometres from the border, the US-backed Kurdish militants known as the YPG, the Syrian branch of the US-EU-NATO designated terrorist group, the “Kurdistan Workers’ Party (PKK).

The Turkish troops backed by Syrian proxies had rapidly advanced in the first week of the military operation into US-occupied Syrian territory, cutting the main roads and attempting to isolate their enemies.

These two swift events were enough to ring the alarm bells and straightaway pushed the US administration to announce, via the Secretary of Defence Mark Esper, the withdrawal of approximately 1,000 US troops from north-east Syria (NES). The killing of any US soldier in Syria would effectively have been a nail in the coffin of the US President Donald Trump’s electoral campaign in 2020. France and Britain, who maintain Special Forces in NES, will follow the US forces out of Syria.

The Syrian President Bashar al-Assad agreed to guarantee the safety of the Kurds as long as these become part of the National Security Forces. No other conditions were put forward by the Kurds, who have lost momentum with the sudden US withdrawal. Damascus promised there will be no revenge or resentment measures towards the Kurds who have, for years, acted as human shields to protect the US occupation forces which remained in Syria notwithstanding the defeat of ISIS.

The Russian-Kurdish deal consists of the deployment of the Syrian army on all borders with Turkey and the return of all sources of energy (gas and oil) to the Syrian government-controlled forces. These sources of energy are vital to the Syrian government, which has been suffering under heavy US-EU sanctions. Any delivery of oil was blocked, except the crude oil from Iran, whose supertanker managed to breach the siege.

The initial agreement between the Kurds and Damascus (via Russia) consists in the ending of the self-administration of NES, the integration of the Syrian Kurds under the command of the Syrian Army, and the pursuit and destruction of all ISIS forces.

A US withdrawal from the al-Tanaf border crossing between Iraq and Syria is also expected when a solution is found for the 64,000 refugees at the Rukhba camp.

All motivation and benefits offered to the US to maintain occupation forces in Syria have ceased: the “Iranian danger” is no longer on the table following the re-opening of al-Qaem border crossing. Therefore, to maintain US forces on the borders when no more “adverse” forces will remain in the country will needlessly cost Trump more money and engage responsibility uselessly.

Clearly the motive to keep US forces in Syria until a new constitution is agreed no longer interests or concerns the US. Trump is leaving this problem to Russia and Turkey to sort out (with the support of Iran!) with President Assad.

Imposing sanctions on Syria is meaningless now and preventing the Arabs’ rapprochement no longer holds any justification. All Arab countries – with the exception of Qatar – expressed solidarity with President Assad and condemned the Turkish invasion. The return of the Arabs will construct a robust base for the reconstruction of Syria. The Syrian market is attractive to Arab countries, and this commercial contact will bring also their influence back to the Levant. President Assad doesn’t mind closing the pages of war and starting a new and positive relationship with the Middle Eastern countries, and he will allow these to enjoy some influence, as was the case before 2011.

Sanctions on Iran have lost their meaning and purpose when al-Tanaf regains its activity, with al-Qaem. Iranian goods will find their way into the Syrian market and vice versa. The Tehran-Baghdad-Damascus-Lebanon road is expected to regain strength and significance.

Trump announced his withdrawal without informing his allies. The US-EU partnership on the ground has fallen apart. US credibility is at its lowest level following its attitude towards the Kurds who had defended the Trump forces in exchange for a State, “Rojava”.

The US elite’s attempt to demonise Russia has fallen apart: Moscow is the saviour of the Kurds, betrayed by the US. The supporters of the Kurds were fanatically supporting the Kurds and asking to avoid their extermination by Turkey: now they can no longer turn their guns and pens against Russia. Here comes Russia, with Assad moving in to save them.

The Kremlin is gaining ground in the Middle East, perfecting its diplomacy in a very complicated area of the world:  the US is running away from it. Moscow took in its arms these same Kurds who had chosen to stay for years in US arms. President Vladimir Putin has skilfully managed to establish a good relationship with both Iran and Saudi Arabia, with Assad and Israel, with Hezbollah, and with the Syrian rebels: even with Turkey.

There are many winners in Syria today, and these include Trump- who is running away to avoid human casualties (as he promised in his campaign). The Kurds are the only real losers as they have lost 11,000 people for a State they only dreamt would materialise one day. Although they bet disastrously on the wrong (American) horse, in the end, they saved their lives by switching mentors.

2 thoughts on “One Rocket Provoked the US Withdrawal from Syria”