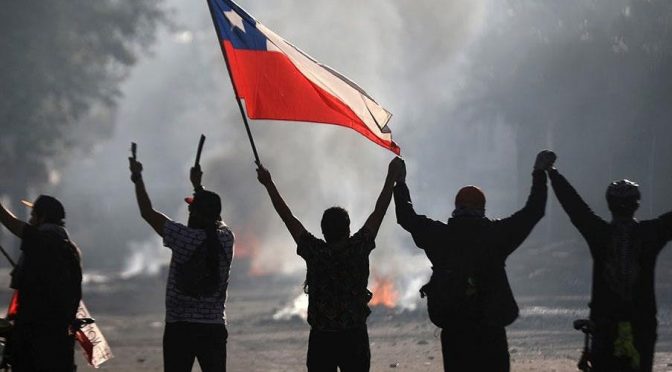 The so-called “pink tide” is a period in Latin America that peaked in 2011 as it saw Argentina, Bolivia, Brazil, Dominican Republic, Ecuador, El Salvador, Nicaragua, Paraguay, Uruguay and Venezuela all ruled by left-wing governments. However, the tide began to turn back as Argentina, Brazil, Ecuador, Peru and others returned to the neoliberal order in recent years. However, the political pendulum, which has been moving to the right is seemingly going back to the left.

The chaotic events in the Chilean capital of Santiago, along with the brutal reaction of security forces that has seen 19 people dead, is state-backed violence not seen since the years of the Pinochet dictatorship. (Below: Pinochet and Kissinger).

The mobilization of the Chilean armed forces is not a sign of strength, but evidence of a political panic that permeates all across Latin America. In the face of President Sebastián Piñera, the whole neoliberal model of the IMF that Washington has consistently exported to the region since the installation of Pinochet, is once against being challenged by the people of Latin America.

Ecuadorean President Lenin Moreno was initially elected to follow the socialist program of his predecessor, Rafael Correa, the ardent defender of WikiLeaks founder, Julian Assange. Moreno has not only offered Julian Assange, an Australian-born but Ecuadorean citizen whistle blower, to the U.S., but has offered land and water as well. This is in conjunction to his initial agreement to implement IMF demands that would completely destroy the Ecuadorean Middle Class and reverse efforts in poverty reduction.

It is little wonder why Ecuador exploded weeks ago, forcing Moreno to backdown on implementing the IMF demands. He not only withdrew fuel price liberalization, but was forced, for a time, to abandon his country’s capital of Quito, a highly embarrassing move.

At the same time, Evo Morales’ new election victory in Bolivia , as well as Washington’s failure to overthrow the Venezuelan government, despite repeated coup attempts, provide some proof that the so-called “pink tide” could make a comeback – even without some of the radical features of its first incarnation.

Importantly, on Sunday’s Uruguayan elections, Leftist Daniel Martínez received 39.9% of the vote while neoliberal Luis Lacalle Pou of the National Party received 29%. Both will now compete in the second round of the elections on November 24. Although there are still many weeks until the next round, it does appear for now that Martínez will be the next leader of Uruguay.

We must not forget, of course, that Washington has already lost a valuable ally in Mexico, a country that in the past elected its presidents among executives of American companies, such as Coca Cola, as well as reactionaries who asserted their power with state violence. President Andrés Manuel López Obrador has not shied away from building stronger ties with both China and Russia, even as both are competing with Mexico’s powerful neighbour to the north, the U.S.

The political earthquake in Argentina has been epic as Peronist Alberto Fernandez won the election against neoliberal Mauricio Macri had a better yield of votes than previous research indicated, reaching 40.61% of the preference. However, that was not enough to take the election to the second round, as Fernández won 47.88% of the vote, enough to take the title of president- elect on Sunday. The removal of Macri from the presidency does not only signify his personal failure, but also the complete rejection of the IMF’s financial program, which in the country is seen as identical to U.S. dependence and has seen poverty sharply rise in Argentina.

In Brazil, the large rallies of protest over the devastating fires in the Amazon, as well as cutbacks in education, caused the first cracks in the absolute power Far Right-loving President Jair Bolsonaro (image below with Trump). But even Brazil’s right-wing economic elite having expressed its frustration and anger over Washington in recent days, as Donald Trump initially backtracked on his vow to support Brazil’s membership of the Organization for Economic Cooperation and Development (OECD). For Bolsonaro and the elite businessmen who supported him, the OECD was the center piece of their economic policy. Indeed, in order to gain the favor of the U.S. they had to make a series of concessions, such as the transfer of Alcantara’s strategic air and space base.

Finally, in Colombia, which is a hotbed for U.S. aggression across Latin America and has become a center for the CIA and USAID to overthrow Venezuelan President Nicolás Maduro, the government survives a state of constant terror. Paramilitary raids, which usually operate with the backing of the Colombian army and police, continually execute trade unionists, members of left-wing organizations and leaders of indigenous groups, who question President Iván Duque Márquez authority. There is little suggestion that the situation in Colombia will soon change.

Therefore, the recovery of center-left and left-wing governments in Latin America that challenge Washington’s empire is beginning to return to the continent. The whole region, however, has always been the most sensitive barometer of the global financial crisis – such as the one expected by almost all major economists and international organizations. As the crisis deepens, Washington’s allies in the region will be confronted with movements and uprisings that will challenge the neoliberal order of the superpower.

Maintaining this model will require more coups, martial law and blood on the streets. But this is unlikely to work as the people of Latin America have demonstrated that they are no longer tolerant of the neoliberal world order and continue to push for their sovereignty and choices to guide their own destinies. No matter what happens now, Latin America is beginning to change once again, and it is not in the direction of Washington’s vision and demands.

When Chilean President Sebastián Piñera went on television to extend the country’s state of emergency on Sunday, he was surrounded by military figures – trying to convey a message of strength and unity amid massive protests and violence in the streets. Inevitably, comparisons with Chile’s dark military past flooded the Internet.

Only two weeks before, Ecuadorians had witnessed a similar scene. As demonstrations against a multi-billion dollar austerity program spiraled out of control, President Lenín Moreno appeared surrounded by his generals to impose a nationwide state of emergency. In both countries, the army was deployed to the largest cities with a broad mandate to re-establish order.

2 thoughts on “Is Latin America Once Again Liberating Itself From The U.S.?”