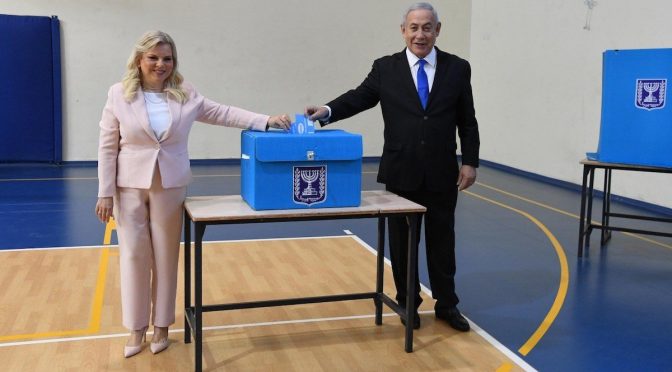 Israel’s election results are in. In terms of narrow party-focused politics, the results were inconclusive. The two main electoral lists resulted in a near draw.

According to the final vote tally, the Blue and White electoral alliance – led by two former Israeli generals and an ex-TV news presenter – ended narrowly ahead with 33 seats in the Knesset, Israel’s parliament.

But they were only a single seat ahead of the ruling Likud Party of the current prime minister, Benjamin Netanyahu, who won 32 seats.

Nonetheless, the Israeli president has just provided Netanyahu with the first opportunity to form a government, since the incumbent obtained more recommendations from incoming lawmakers overall.

But in terms of what the elections mean for the indigenous people of Palestine, this vote concluded with an emphatic result. Israelis have just voted to continue to permanently impose their racist military occupation regime upon millions of Palestinians.

Liberal Zionists in the UK and the US, when criticised for their support for Israel, quite often take a defensive posture claiming that they oppose “the Netanyahu government.”

Many have been on social media in recent weeks, praying for the downfall of Netanyahu. They also sometimes claim to oppose “the occupation” stating that they work for a “two-state solution” to “the conflict.”

But all that is just so much sophistry.

It is to ignore the reality of the Zionist regime and what it means for Palestinian lives.

The truth is that Israelis have overwhelmingly just voted in favour of continuing the occupation forever.

Israelis have just voted profoundly in favour of continuing the violent, racist, military dictatorship that the Israeli military imposes on the West Bank and the Gaza Strip, indefinitely.

Israelis have just voted in favour of continuing to deny all Palestinians, between the Jordan River and the Mediterranean Sea, equal rights.

And Israelis have just voted unquestionably in favour of continuing to permanently deny Palestinian refugees their internationally recognised legal rights to return to their homes, in present day Israel.

All Zionist parties in the Knesset, oppose ending the Israeli military occupation of the West Bank and the Gaza Strip.

Only the Joint List – an alliance of parties led by politicians who are mostly Palestinian Arabs – called for an end to the occupation. Even the so-called “left wing” Zionist party Meretz (now part of the Democratic Union list), did not issue a statement claiming that they would end the occupation.

The Joint List did reasonably well, winning 13 seats. But even that means that only almost 11 per cent of citizens of Israel voted to end the occupation of any Palestinians at all.

It means that more than 89 per cent of Israeli citizens voted to keep 5.3 million Palestinians living under the boot of their military dictatorship, forever denying them the most basic human and political rights.

For all the cant of the Western liberal Zionists about “Israeli democracy,” the fact is that none of those 5.3 million people have a vote in the elections for the only government that really controls every aspect of their daily lives – purely, and simply, because they are not Jewish.

None of these are the actions of a democracy. This is an apartheid regime – an ethnocracy.

As the Palestinian intellectual, Diana Buttu, put it this week (in an interview which you can watch in the video above), there is no real difference for Palestinians between Netanyahu and the leader of the Blue and White list – former Israeli general, Benny Gantz.

As Buttu explained, the latter is “a man who even when individuals said that all that they were demanding was equality, came out and said very succinctly he does not at all believe in equality. On the issue of Gantz versus Netanyahu, when it comes to Palestinians, they are exactly identical.”

In his election campaign this year, Gantz repeatedly boasted of how many Palestinians he has killed during wars he has led. His election videos gloated that in the 2014 war, he had bombed parts of Gaza back to the “stone ages”.

When Netanyahu unveiled his plan to annex large swathes of the West Bank this month, rather than condemning him, Gantz too explained that the Jordan Valley would forever remain under Israeli military occupation.

All of this means that anyone campaigning in favour of Palestinian rights, has to face up to a stark reality – the vast majority of Israelis support the occupation. They do not oppose it, as is often claimed.

The figure of 89 per cent of Israelis in support of the occupation, is extremely conservative. A majority of the less than 11 per cent, who voted for the Joint List, will have been Palestinian citizens of Israel.

It is true, that a small minority of dissident Israeli Jews are against the occupation and for equality – just as how in apartheid South Africa, there was a small dissident minority of the white settler population who opposed – and even fought against – the white supremacist regime there.

But we have to face up to this simple fact. Just as was the case with white South Africans – the vast majority of Israelis are never going to vote away their privileges under Israel’s racist system.

Full equality will have to be imposed upon them.

Bibi’s wife is meted recently with a mere slap on the wrist for corruption.