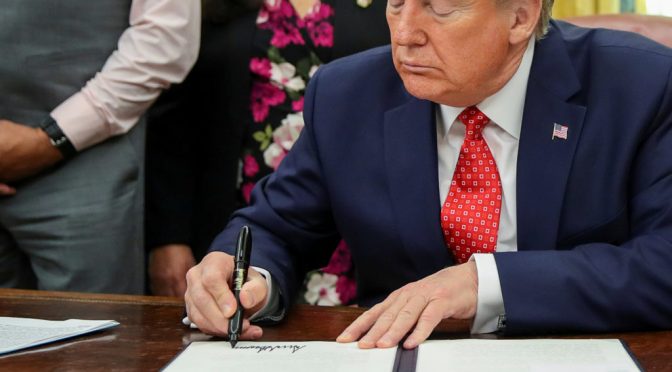 It was only 2 weeks ago when a group of Hong Kong anti-China protestors sprayed a bottle of flammable liquid into a Chinese bystander who’s not joining their action.

These Hong Kong protestors are being led by the CIA front National Endowment for Democracy [NED] funded activists, who have been asking for US support.

The CIA playbook is being played to the letter, including blood baiting…

That request of the Hong Kong protestors was granted when some hours ago Trump signed the bill expressing support for Hong Kong “human rights,” which Beijing considers a blatant form of US interference in its domestic affairs.

In a related development, the US Secretary of State Mike Pompeo has also made it official that the Trump government now considers Israel’s illegal occupation of Palestinian lands as legal, which begs the question:

Is Trump really after the draining of the DC Swamp?

Or, is he just placating the US population from taking any definitive actions against what the US government has become?

Assuming, of course, that the Americans are indeed against any form of aggressive actions abroad.

The perennial excuse has been that the Deep State is an all too powerful organization and taking collective action against it is futile. That’s passivity anchored merely on a myth.

If the Deep State is indeed an all too powerful entity, then it should not have used domestic opposition groups to fight for it. What the Deep State has is its ability to control your mind through media propaganda and project the image that it is beyond the power of men, and the use of selective punishment to provide a chilling effect and prevent future dissent like what they’re doing in Julian Assange.

It could not punish everyone taking actions against it. All it can do is censor all anti-Deep State online conversation via the conscripted big technology companies.

More so, that it is physically impossible for the Deep State to stop all the multiple actions lodged against it in the global arena. That’s why we have Brazil’s Bolsonaro cozying up to the rest of the BRICS Alliance members by putting his best foot forward during his hosting of the summit recently, because he can see the writing on the wall.

How timely would it be then for the Americans to take meaningful actions against the Deep State, when the rest of the world is already moving away from the Petrodollar and from all the systems that the Deep State has built over the years?

Waiting for the reelection of a Donald Trump is not only playing into the Jesuit CIA mind control playbook, but proof that the Americans are not as brave and free as they think.

Expecting a foreign intervention within the US should never be expected. The Americans must free themselves from the clutches of the bankers by their own actions. They should do this for a change.

Otherwise, the Eastern Alliance will just shut down the petrodollar rather abruptly the next time around. When that happens, it would surely affect every American, including those who are still in their deepest slumber. That’s what the impending economic depression that some notable analysts are already warning us about.