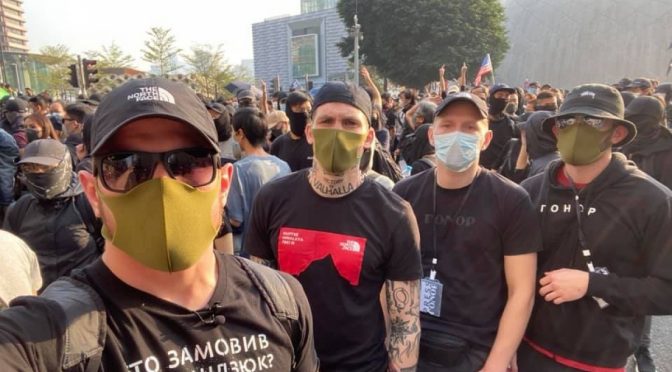 Neo-Nazis from Ukraine have flown to Hong Kong to participate in the protests, an independent news website The Grayzone reported Wednesday. They are now busy training HK protestors how to properly launch riots and pin down the police department, as they did during the highly successful “Maidan Revolution.”

They call themselves Gonor and have tattoos on their upper torsos with undeniable symbols of white supremacy and neo-Nazism.

Serhii Sternenko is one of the members. He headed the Odessa section of Right Sektor in Ukraine when it torched the Trade Unions House on May 2, 2014, killing 42 people and injuring hundreds in street violence, the Russian news agency Sputnik said.

Another member Serhii Filimonov once headed the Kiev branch of the Azov Civilian Corps, a support group for the ultra-nationalist Azov Battalion, which is thinly veiled as a civilian NGO.

On Dec 1, Filimonov shared a video of himself and other Ukrainian far-right figures in Hong Kong and posted “Hong Kong welcomed us as relatives.” The video also showed one of his partners obtained a press card and masqueraded as a journalist.

On Dec 2, those people posted photos of themselves on the campus of Hong Kong Polytechnic University (PolyU).

Several of the men wear paraphernalia of the far-right Honor or Gonor, a so-called youth group founded by Filimonov in 2015, sporting a stylized version of the trident, a symbol with ancient meaning in Ukraine adopted by ultra-nationalists, as three daggers. Several also have neo-Nazi tattoos, such as swastikas, according to the Sputnik.

Despite the strong evidence showing that these people joining the protests in Hong Kong are neo-Nazis, a Ukrainian Facebook page called the Free Hong Kong Center rapidly came to the defense of the Gonor crew.

The Free Hong Kong Center, a project of a pro-European Union advocacy organization called the Liberal Democratic League of Ukraine, posted a statement describing the neo-fascists as “simple activists”. The statement declared that these people were connected to the Azov group, but had been unaffiliated since 2015.

“They assured us they are really against Nazism and other kinds of alt-right ideology,” the statement read, dismissing the neo-Nazi imagery as traditional Ukrainian symbols.

The report also mentioned that “in the three years before the 2014 coup (in Ukraine), the CIA-backed NED sunk $14 million into regime change efforts in Ukraine, and the NED has been cultivating anti-Beijing attitudes in Hong Kong since the mid-1990s, before the territory was returned to Chinese rule by the British Empire.” – China Daily

So, while one sector of the Khazarian Criminal Cabal is sitting down at the negotiating table, another group is trying to assimilate Hong Kong into its fold again for purposes of being able to plant a hybrid force to constantly check on China.