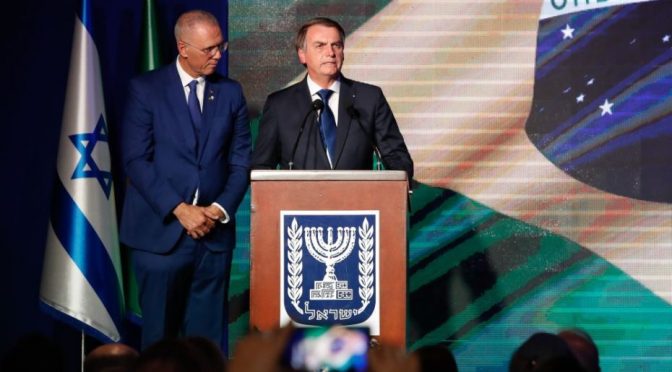 With the ouster of progressive governments throughout Latin America and their replacement with right-wing neo-fascist regimes, Israeli counter-insurgency advisers, better known as “merchants of death,” have returned to Latin America with fervor.

Fascist-oriented regimes in Brazil, Bolivia, Colombia, Peru, Ecuador, Honduras, Paraguay, Guatemala, and Chile, eager to displace indigenous peoples, have invited the Israelis back to their nations to provide advice on depopulating indigenous regions as systematically as Israel has done to the Palestinians in the West Bank and East Jerusalem.

After the socialist tide swept Latin America, progressive governments backed the Palestinian plight and eschewed close relations with Israel. Some progressive leaders, including Hugo Chavez of Venezuela, Evo Morales of Bolivia, and Daniel Ortega of Nicaragua severed relations with Israel over its maltreatment of the Palestinian population of Gaza. With Morales being recently overthrown by a right-wing military coup and Chavez’s successor, Nicolas Maduro, on the political ropes due to crippling US-led sanctions, Israeli counter-insurgency mongers are frequently seen in Latin American capitals where right-wing, even neo-Nazi influenced regimes govern. Using almost Talmudic logic, the Israeli government believes that in order to battle pro-Palestinian governments having friendly relations with Iran it is acceptable to deal with the likes of Brazilian President Jair Bolsonaro, who, in the past, has expressed admiration for Adolf Hitler and Benito Mussolini.

Israel’s security legacy in Latin America stands as an infamous record of supporting genocidal dictators. With the advent of the “Socialist Spring” in Latin America, the Israeli death merchants largely adopted a lower profile or sought out new prospects in Africa, the Balkans, and South Asia. With Bolivia’s Morales being the last of the “Socialist Spring” leaders falling in the “southern cone” of South America, Israeli counterinsurgency merchants saw a new market open when the Bolivian junta’s Interior Minister, Arturo Murillo, welcoming Israeli assistance to beef up the capabilities of his newly-formed death squad, the “Anti-Terrorist Group” (GAT), which he said was aimed at battling “terrorists.” In typical fascist parlance, “terrorists” in this case, are Bolivians loyal to ousted President Morales, who, after a brief exile in Mexico, now enjoys political asylum in Argentina, as well as Morales’s fellow native indigenous peoples: the Aymara (Morales’s ethnicity) and the Quechua, Chiquitano, Guaraní, and Moxeño.

Interior Minister Murillo’s reason for choosing the Israelis as his security advisors was stated in an interview with Reuters. He said, “They’re used to dealing with terrorists. They know how to handle them.” Murillo was, of course, referring to Israel’s brutal repression of the Palestinian people, a record of inhuman treatment that Israeli military and intelligence companies have managed to package, with equipment and advisers, as an export commodity. Murillo’s commitment to establishing an Israeli-style surveillance state in Bolivia was made clear in his warning to a group of Argentine human rights officials who arrived in Bolivia to see, first hand, the human rights abuses directed against members of Morales’s Movement Toward Socialism (MAS) party and indigenous peoples. Murillo warned the Argentines and other foreign officials in declaring: “We recommend these foreigners who are arriving to be careful. We are looking at you. We are following you. There is no tolerance for terrorism, sedition or armed movements. Zero tolerance.” The warning is practically a carbon copy of that delivered by Israel to international aid workers who have tried to bring relief supplies to the people of Gaza.

The Israelis had the advantage of quickly arriving in Bolivia to offer their services from neighboring Brazil. Brazil’s President Bolsonaro and his foreign minister, Ernesto Araújo, are Christian fundamentalist fanatic supporters of Israel. Both are disdainful of Muslims, including the Palestinians, who, they claim, are not a people with a right to nationhood. Araujo’s background should be anathema to Israelis. However, because Binyamin Netanyahu government decided to create a Faustian alliance with all enemies of Palestinians and Muslims, even if they are neo-Nazis and white supremacists, Israel has made common cause with individuals like Bolsonaro and Araújo and it is assisting them in their genocide of Amazonian Indians.

Israel has no problem with maintaining close relations with Araújo, even though his father, Henrique Fonseca de Araújo, served as the Attorney General of Brazil between 1975 and 1979 under the Brazilian dictatorship of General Ernesto Geisel, the son of German immigrants. Together, Attorney General Araújo and Geisel prevented the extradition to Germany of Gustav Franz Wagner, the deputy commander of the infamous Sobibor extermination camp in Nazi-occupied Poland. Sobibor’s only reason for existence was to exterminate Jews. Known as “The Beast,” Wagner was responsible for the extermination of 200,000 Jewish inmates. After the war, Wagner escaped from Italy to Syria, and, ultimately, with a Brazilian passport issued under the name Gunther Mandel, escaped to Brazil. Attorney General Araújo’s refusal to extradite Wagner to Germany, where he faced a death sentence, did not protect “The Beast” for very long. In 1980, Wagner was found dead under suspicious circumstances in Sao Paulo. A knife was driven into his chest.

Israel also maintains a close security relationship with Paraguayan President Mario Abdo Benitez. Benitez delighted the Israelis earlier this year when he announced that Paraguay recognized Hamas and Lebanese Hezbollah as terrorist groups. In May 2018, Paraguay further pleased Israel when Benitez’s predecessor, Horacio Cartes announced that Paraguay would move its embassy from Tel Aviv to Jerusalem. Relations soured after Benitez changed announced in September 2018 that the embassy would be moved back to Tel Aviv. The announcement coincided with the opening of a Palestinian embassy in Asuncion. Israel was furious and it closed its embassy in Asuncion in protest. Since Benitez declared Hamas and Hezbollah to be terrorist organizations, relations between Israel and Paraguay have been patched up. Israel does not mind Benitez’s family background, just as it overlooks that of Brazil Foreign Minister Araújo.

Benitez is the son of Mario Abdo Benítez Sr., the private secretary of Paraguay’s military dictator, General Alfredo Stroessner. The son of a Bavarian immigrant to Paraguay, Stroessner welcomed two Nazi refugees to Paraguay: Dr. Josef Mengele, the infamous “Angel of Death,” who performed grotesque experiments on the inmates of the Auschwitz-Birkenau extermination camp in Nazi-occupied Poland, and Edward Roschmann, the equally-infamous “Butcher of Riga.” Roschmann, who oversaw the mass murder of Latvian Jews in Riga, entered Paraguay from Argentina with papers bearing the alias name of Federico Wegener. Mengele was granted citizenship by Stroessner under the name of José Mengele.

One of the most shameful examples of Israeli assistance to commit genocide was in the 1980s in Guatemala. There, Israeli advisers, using advanced surveillance equipment, helped dictator Efrain Rios Montt, a member of the California-based Christian fundamentalist cult called the “Church of the Word,” to carry out the elimination of entire Mayan Indian villages. One million Mayan Indians were affected by the Israeli inspired and supported genocide. Not only did Israelis help Montt murder tens of thousands of Mayans, but it helped him gain power in his 1982 military coup. Similar Israeli assistance was seen in military coups in Venezuela in 2002, Honduras in 2009, and Paraguay in 2012. In 1983, the “CBS Evening News with Dan Rather” reported that Israel “taught the Guatemalans how to build an airbase. They set up their intelligence network, tried and tested on the West Bank and Gaza, designed simply to beat the ‘Guerilla’.” A Guatemalan court later tried and convicted Montt for genocide and crimes against humanity. Yet, none of Montt’s Israeli collaborators faced punishment. One of Israel’s security advisers in Guatemala at the time, Lieutenant Colonel Amatzia Shuali, reportedly said, “I don’t care what the Gentiles do with the arms. The main thing is that the Jews profit.”

In the style of the Nazis, Montt’s military shot every resident of the Mayan village of Dos Erres and burned it to the ground. Israeli-made Galil rifles were found at the scene of the war crime. Today, some of the grandchildren of the victims of Montt’s war find themselves on the receiving end of Israeli surveillance technology sold to the United States as they attempt to seek asylum at the US southern border.

It may become harder for members of US academia to research, write about, or discuss Israeli support for genocidal regimes in Latin America. On December 11 of this year, Donald Trump signed an executive order prohibiting federal funds to US colleges and universities that permit any criticism of Israel and its policies. Such campus activities are now labeled by the White House as “antisemitic.”

Wayne Madsen Investigative journalist, author and syndicated columnist. A member of the Society of Professional Journalists (SPJ) and the National Press Club.