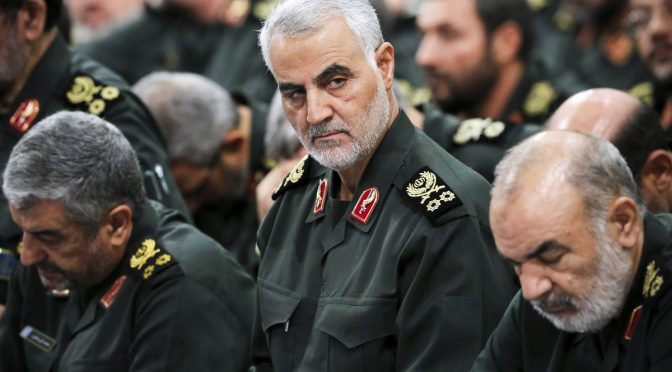 “Major General Qassem Soleimani is the world’s most accomplished military figure in the field of counter-terrorism…Gen. Soleimani’s fight against Daesh is a wholehearted fight— unlike America’s ambivalent war on Daesh that has included covert support for the same terrorists it fights,” Kevin Barrett from Madison told Tasnim.

Gen. Qassem Soleimani was on a diplomatic mission of peace, upon the invitation of Donald Trump through State Sec. Mike Pompeo, when he was ambushed with real-time Israeli coordinates.

Following is the full text of the interview.

Tasnim: How do you see the role of commander of the IRGC Quds Force Commander Major General Qassem Soleimani in fighting terrorist groups, particularly Daesh, in Iraq and Syria in the past years?

Barrett: Major General Qassem Soleimani is the world’s most accomplished military figure in the field of counter-terrorism. The word “terrorism” is defined as the intentional targeting of civilians. Daesh is undoubtedly a terrorist organization since it intentionally targets civilians based on their ethnicity or religion. And it does so in such barbaric fashion that many have wondered whether part of its real mission is to make Islam look bad in the eyes of global public opinion.

Gen. Soleimani’s fight against Daesh is a wholehearted fight— unlike America’s ambivalent war on Daesh that has included covert support for the same terrorists it fights. Gen. Soleimani, unlike the Americans and Russians, has led forces that are indigenous to the region. His forces are genuinely committed to defeating Daesh. They are not just in it for a paycheck; whereas some of the anti-Daesh forces under US command, not to mention the Americans themselves, are mere mercenaries, of whom John Cale once said: “Mercenaries are useless, disunited, unfaithful, with nothing to keep them in the battle except a meager wage, which is just about enough to make them want to kill for you, but not enough to make them want to die for you.”

Gen. Soleimani and his troops, unlike the mercenaries (including Daesh mercenaries drawing Saudi paychecks), are willing to put their lives on the line. Like the Ansarullah in Yemen, Gen Soleimani’s forces have fought bravely and skillfully against mercenaries hired by tyrants.

Tasnim: The 33-day war launched by Israel in 2006, also known as the July War, took place in Lebanon, northern parts of Occupied Palestine and the Golan Heights. How much do you think General Soleimani has been effective in strengthening the axis of resistance and confronting the US and Israeli plots in the region?

Barrett: Gen. Soleimani recently gave a rare interview in which he discussed his role in the 33-day war. Western sources have long admitted that Gen. Soleimani’s leadership was a crucial factor in Hezbollah’s humiliation of the Zionists in 2006. But only now has the world learned that Gen. Soleimani spent virtually the entire war in Lebanon, shoulder to shoulder with Hezbollah leader Syed Hassan Nasrallah and commander Imad Moughnieh, who was later martyred in 2008.

Gen. Soleimani’s remarkable achievements (and his courage in taking the fight to the Zionist enemy in its own backyard) highlight the wisdom of Iran’s regional policy, which involves offering support to independent, principled groups committed to resisting Zionism and imperialism. This approach contrasts starkly with the American approach to building alliances, which seeks out ambitious, unprincipled egotists who are willing to sell out their countries for a fistful of American dollars. Those sell-outs become America’s “friends and allies.” But since they are basically selfish and corrupt, they are not very effective allies. They are not courageous in battle. Nor are they much loved by the people of their own countries.

Right now the Western world is wondering how Saudi Arabia, with its $67 billion military budget, can be losing to the low-budget Ansarullah forces. The answer is that the Saudi forces are corrupt from top to bottom. They are in bed with Zionism and imperialism, and they have no true leadership, no principles, and no real cause except their own pocketbooks.

Gen. Soleimani leads faithful Muslim forces committed to truth and justice. The Axis of Resistance is fighting for a just cause: to expel the forces of Zionism and imperialism from the Muslim East. This is a cause that the vast majority of the population of the region, in their heart of hearts, strongly supports. That is why the Axis of Resistance, with its relatively tiny military budget, can successfully wage a David vs. Goliath struggle and defeat the richest and most powerful entities on earth.

Tasnim: Mobilization of volunteer forces in Syria, Iraq, Pakistan, and Lebanon by the General has played a key role in defeating hegemonic powers and their schemes. What do you think?

Americans and Zionists used the September 11, 2001, false flag to try to remake the region in their interests. They are now facing defeat, thanks to the resistance of the people of the region in general, and the leadership of the Axis of Resistance, including Gen. Soleimani, in particular.

As an American citizen, I believe my government should face the reality of the situation and radically change its policy, embracing or at least working with principled, independent forces, and giving up on Zionism and the tyrannical (Persian) Gulf monarchies. Such a policy shift would align with America’s real interests. But it probably won’t happen until Zionist domination of the US ends.

Dr. Kevin Barrett, a Ph.D. Arabist-Islamologist, is one of America’s best-known critics of the War on Terror.

He is host of TRUTH JIHAD RADIO; a hard driving weekly radio show funded by listener donations at Patreon.com and FALSE FLAG WEEKLY NEWS (FFWN); a audio-video show produced by Tony Hall, Allan Reese, and Kevin himself. FFWN is funded through FundRazr.

2 thoughts on “Gen. Qassem Soleimani: The World’s Most Accomplished Military Figure in Counter-terrorism”