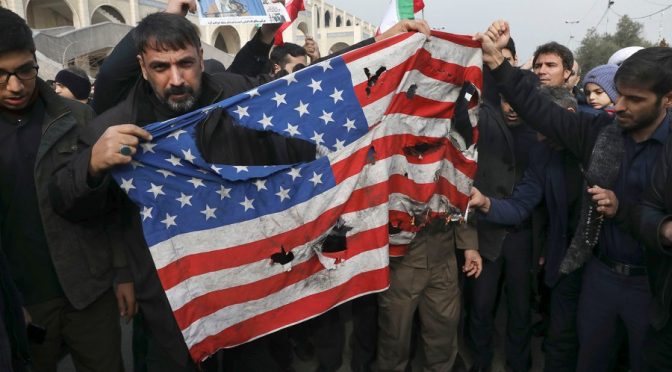 Soleimani’s body has yet to arrive at its final destination, but already the fallout to Trump’s assassination of the most respected general in all of Middle East has begun.

“Keep your conflicts away from Iraq”

Iraq, the location of the drone strike, has already passed the resolution to evict US troops from Iraqi soil, in order the mitigate from being the potential ground zero of the incoming US proxy war with Iran .

In fact, the caretaker Iraqi Prime Minister Adil Abdul-Mahdi has already denounced the assassination as a violation of Iraqi sovereignty and an act of aggression against the Iraqi people, and it would not be surprising if the Iraqi interim government demands the full withdrawal of U.S. forces in the coming days.

Leader of Lebanon’s Hezbollah has warned that the US military in the Middle East will pay the price for the killing of Maj Gen Soleimani.

No matter what the US apologists are saying, any Iranian retaliation against US troops in the Middle East will be viewed as morally grounded and justified.

A video posted on social media shows huge crowds marching in protest following Soleimani’s death, before a male voice can be heard placing a bounty on the US President’s head.

“On behalf of all of Iran’s people – 80 million Iranians – and each puts aside US$1, it would equal $80million.

“And we would give this $80million, on our own behalf, as a gift to anyone who brings the head of the person who ordered the murder of the grand figure of our revolution.

“Anyone who brings us the head of this yellow-haired lunatic, we would give him $80million on behalf of the great Iranian nation. Chant if you agree.”

He said: “We can attack the White House itself, we can respond to them on the American soil.”

“This [assassination] is a declaration of war, which means if you hesitate you lose.

“When someone declares war do you want to respond to the bullets with flowers? They will shoot you in the head.”

Obviously, it is only fitting for Iran to remove all restrictions of its own nuclear program.

Even more devastating for the Trump administration is the leaked information that it was a diplomatic ambush from the very beginning.

No magic intercepts were needed, we now learn from Iraq, to arrange for the assassination of Soleimani.  We now learn that the ambush was staged through diplomatic channels, drawing Soleimani to Iraq in order to receive an offer of reduced sanctions from President Trump.

General Qassem Soleimani landed in Iraq to meet with PM Adel Mahdi, who was to be given a message for Iran by President Trump.  He was murdered instead, the diplomatic note from Secretary of State Michael Pompeo to the Iranian envoy, Soleimani, was, in fact, an invitation to an ambush.

Soleimani flew from Damascus and was killed as he left the diplomatic check-in at the Baghdad International Airport.

Iraq had been acting as intermediary between Tehran and Washington with General Soleimani acting as diplomatic representative of Iran.

Soleimani had been asked by the Iraqi government to organize and train the forces that defeated ISIS, a process that was continuing as it had been continuing in Syria in partnership with Russia and Turkey, as part of the Astana Coalition.

With all its bluster post-Soleimani assassination, the White House should be trembling by now. This war cannot be won by big guns and hypersonic missiles. Sooner or later, this war will be brought home to the streets of America, and the Deep State knows and desires it.

America, like any other countries, cannot justify any assassination in foreign soil, unless provoked at home. No Americans should call anybody a terrorist protecting his own homeland, while they call their sons as patriots for fighting for the corporations abroad. That’s worse than cognitive dissonance.

All of America’s troubles come from their own Deep State, and nowhere else. Its constant failure to address its problems properly comes from not recognizing that fact.

After decades in Afghanistan and Iraq, the US government still cannot justify why it’s there in the first place, and how it should end.

Even Trump promised to bring all US troops home. Yet, he has done the exact opposite of what he has promised, that even his own fanatic pundits are shying away from even saying a straightforward explanation to justify this grave mistake.

It would be hard for them to continue parroting the idea that Trump is fighting, not for himself, but for the ordinary Americans and against the interests of the Deep State, because this assassination could facilitate America’s own downfall.

No amount of threats coming from America could stop the onslaught of attacks coming from millions of Soleimani sympathizers in various parts of the world, because unlike in the case with Saddam Hussein and Muammar Qadaffi, there is no competing paradigm against the man. He was deeply revered because his unselfish anti-Deep State sentiments and intentions were so clear to them.

This is not some post-false flag operation like the WTC 911 either, where the global community were sympathizing the Americans, nor is it “a struck of genius” to finally bring home American troops. This is a daylight assassination of a prominent leader of the revolution against the Deep State, virtually constituting a war declaration from the White House.

Therefore, there simply is no moral limit on what the Arabs and the Persians can do to extract justice for their fallen hero.

Besides the ones already listed above, various other methods will also be used, including snatching Brits and Americans from Western soil and brought to Tehran as leverage.

The White House war planners are in fact hoping that the impending onslaught of retaliatory attacks would be enough a distraction for Trump to stay in power. We are anticipating that it will be more than what the White House is hoping for.

So, for those who are laughing at the Iranians today, they should come into the realization that they are being sent to their own graves by their own government officials. They should also take stock in the fact that Iran is a secular nation and is highly respected in the region and elsewhere, even from citizens of countries where its leaderships are allied with the US warmongers.

“Just following orders…” has never been a good excuse. It is your fault, and your fault alone to die in the Middle East, and elsewhere. There will be mourning of Western lives lost once again. Sheeples deserve nothing better.

The full elimination of the parasitic Western Deep State is the only solution to this cancer. Half measures have already proven their futility.