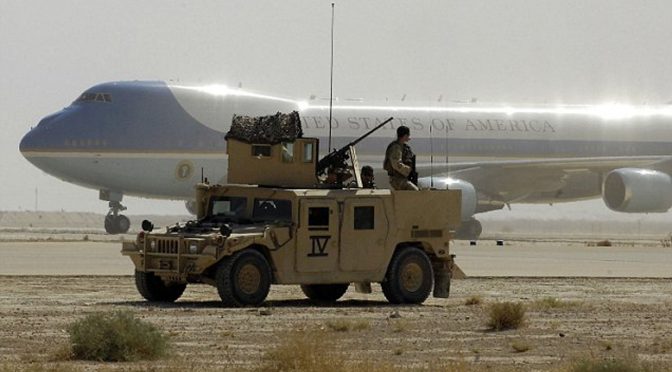 “According to the reports sent by our sources in the region to this moment, at least 80 US army personnel have been killed and around 200 others wounded,” he said, adding that the wounded have been evacuated from Ein Al-Assad on choppers.

He further underlined the strategic importance of Ein Al-Assad airbase to the US, and mentioned that the military center provided backup for US army drones.

“Some 20 sensitive points of this base were struck by 15 missiles, resulting in the destruction of a considerable number of drones and helicopters,” the source added, explaining that some of the targets have been destroyed in a single strike resulted from the high-explosive power of the warheads and serial explosions.

He reiterated that the US army was on high alert, but failed to show proper reaction.

The IRGC source further cautioned that “a sum of 104 sensitive US positions in the region have been identified to immediately come under raid as soon as the Americans make the first mistake”.

The IRGC Aerospace Force started heavy ballistic missile attacks on US Ein Al-Assad airbase in Southwestern Iraq near the border with Syria and a US operated airbase in Erbil in retaliation for the assassination of IRGC Qods Force Commander Lieutenant General Qassem Soleimani.

The second IRGC reprisal attack targeted a US military base near Erbil airport in Iraqi Kurdistan Region in the second leg of “Martyr Soleimani” reprisal operation.

All flights have been cancelled at Erbil airport.

Iraq said the attacks have not taken any toll from its army men stationed at these two bases. The US army had blocked entrance into Ein Al-Assad to everyone, including the Iraqi army.

This is the first direct attack on the US army ever since world war two.

IRGC officials said none of the missiles had been intercepted.

Following the attack, the IRGC issued a statement immediately after the attacks, declaring that it has fired tens of ground-to-ground missiles at “the airbase occupied by the terrorist and aggressive army of the United States known as Ein Al-Assad” in reprisal for the martyrdom of IRGC Qods Force Commaner Lieutenant General Qassem Soleimani.

The IRGC warned the US to avoid retaliating the Wednesday attack or else “it will face a more painful and crushing response”.

The IRGC Statement also warned “all the US allied states where the terrorist army has a base, any territory that becomes the origin of any hostile and aggressive action against the Islamic Republic of Iran in any way will be targeted”.

“We believe that the Zionist regime by no means stands aside from the criminal US regime in these crimes.”

The IRGC also called on the American nation to pressure the White House to pull their troops out of the region to avoid further damage and not allow the US rulers to endanger the lives of their military men through increasing hatred.

All Iranian underground missile towns are on alert.

The missile attack came hours before the body of General Soleimani was laid to rest.

Lieutenant General Soleimani was martyred in a targeted assassination attack by the US drones at Baghdad International Airport early on Friday morning.

He was on a diplomatic mission for peace with Saudi Arabia, upon the request of Donald Trump through Mike Pompeo, who relayed the message to the incumbent leader of Iraq, Iraqi Prime Minister Adil Abdul-Mahdi.

Iraqi Prime Minister Adil Abdul-Mahdi revealed that President Trump had personally thanked him for organizing peace efforts, even as he was planning the assassination attempt, giving him the mistaken belief that the U.S. gave its blessing to the event and would not attack the Iranian General. Soleimani.

America should be safer now with the Donald recently tweeted “All is well, ” and “So far, so good.”

Iraq is rising against the US, too.

The airstrike against Soleimani also martyred Abu Mahdi al-Muhandis, deputy commander of Iraq’s Popular Mobilization Forces (PMF), or Hashad al-Shaabi. The two were martyred in an American airstrike that targeted their vehicle on the road to the airport.

Five Iranian and five Iraqi militaries were martyred by missiles fired by the US drone at Baghdad International Airport, with Israeli supplied coordinates.

Trump justified his decision to eliminate Soleimani for “planning imminent attacks on US positions in Iraq” with diplomatic passport, on a diplomatic convoy. Only a Trump can make this stuff up.

Anyway, the attack on Soleimani came amid tensions that started by the US attack on PMF units that killed 28 Iraqi popular forces. A day later, Iraqi people attacked the US embassy in Baghdad. PMF units were the ones organized by Soleimani to counter the incursion of ISIS militants in Iraq.

Therefore, it should be clear by now that the Trump government is also assisting ISIS insurgency, as Obama did before with airdrops of military supplies to ISIS positions in Syria.

Soleimani may have accomplished more in his passing

He has shown the entire world that his cause was right. He dedicated himself to the full eradication of the CIA/MOSSAD trained and funded ISIS terror organization. It’s no wonder, the indignation is so overwhelming, it ripples not just across the Middle East, but around the world.

The body of the General arrived in his hometown on Tuesday, after four days after millions-strong funeral processions in several Iraqi and Iranian cities, but it took nearly a day to rest him in peace due to the overwhelming crowds rushing to his funeral ceremony in Kerman.

Hours before General Soleimani was buried, the IRGC Aerospace Force embarked on ballistic missile attacks on US Ein Al-Assad airbase in Southwestern Iraq near the border with Syria and a US operated airbase in Erbil in retaliation for the assassination of IRGC Qods Force Commander Lieutenant General Qassem Soleimani.

Following the attack, IRGC Spokesman General Ramezan Sharif informed the crowd in the burial ceremony of the attack, and said, “The US Ein Al-Assad airbase and a second base in Erbil in Iraq came under attack at 1:20 am (local time), the same hour that they committed that huge crime.”

He said Americans rushed to hold an emergency meeting with much perplexity. “First they declared that Trump would have a speech, but they called it off moments later. Sure they have received the message.”

The targeted assassination attack represents a dramatic escalation by the US toward Iran after months of tensions. The tensions take root in Trump’s decision in May 2018 to withdraw the US from Iran’s nuclear deal with world powers, struck under his predecessor.

With multiple sanctions against it, Iran was on the strategic disadvantage until the madman in the White House decided it’s wise to distract the American Sheeples from his impeachment with a Soleimani assassination.

Here’s a good backgrounder interview of what Trump just did, and what Americans should expect next.