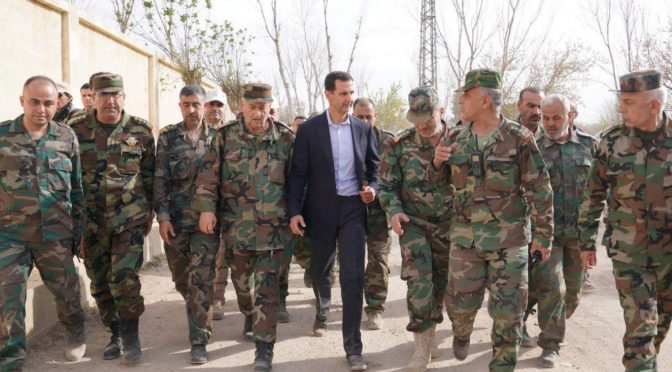 Russian President Vladimir Putin has not issued any direct pronouncements yet on Trump’s decision to assassinate Gen. Qassem Soleimani, but his recent visits to Turkey and Syria, all suggest he’s not sitting idly by while the Middle East is exploding again.

In fact, his visit to Syria already resulted in the Syrian Arab Army preparing to enter Idlib, where ISIS terrorists were moved during the months of negotiations and the ceasefire that was brokered by Russia and Turkey, in the last 2 years or so.

The big question then was how exactly they will deal with these ISIS terrorists, although most of the high-ranking ISIS commanders were already smuggled into Western countries, e.g. Canada, UK,

… but the low-ranking combatants and their families have nowhere else to go after they were used as pawns by the CIA and MOSSAD, i.e. most of them are foreigners and obviously, their home country will also reject them outright.

Back in December 2019, thousands of residents were already moving out from the rebel-held Idlib province.

Some reports have indicated that the US forces in Iraq are now considering moving out to Northeastern Syria.

However, there seems to be some sort of panic within the US military circle when a “draft” letter responding to the Iraqi government’s eviction notice was “prematurely released” to the media.

The misfire added yet another layer of confusion to an already volatile situation.

The reported letter from Marine Brig. Gen. William Seely to Iraqi Lt. Gen. Abdul Amir outlined plans for “repositioning forces over the course of the coming days and weeks to prepare for onward movement.”

“We respect your sovereign decision to order our departure,” the letter added.

But Milley, agreeing the letter was a “mistake,” told reporters it was only a draft and had not been sent. He said he had just spoken to Gen. Kenneth McKenzie, the head of U.S. Central Command, about it.

“He used other words that were a little more colorful than mistake,” Milley said, according to reports from Pentagon reporters who were present.

A defense official who was not authorized to speak on the record said the letter was a draft, not yet ready for delivery to Iraqi officials, but that when delivered, it was to notify them that U.S. forces already inside Iraq would be consolidating at safer locations and leaving or reinforcing bases seen as especially vulnerable to retaliatory strikes by Iranian-backed forces.

Esper also pushed back hard on any notion the U.S. plans to withdraw from the country.

“We are repositioning forces throughout the region number one,” he said. “Beyond that with regard to the letter which I’ve read once, I can’t tell you the veracity of that letter and I can tell you what I’ve read. That letter is inconsistent of where we are right now.”

There are an estimated 5,000 American troops in Iraq helping government forces combat the Islamic State.

In short, the US war planners are not just playing with Iraqi and Iranian lives, even US forces on the ground were also subjected to unnecessary risks, by not having a clear plan post-Soleimani assassination.

Even last year’s Trump announcement of US troops withdrawal felt like a painful insult after a massive injury for the Syrian people.

Hundreds of U.S. Troops Leaving, and Also Arriving in, Syria

Once the comings and goings are done, the number of U.S. forces in Syria is expected to reach about 900 — close to the 1,000 troops on the ground when President Trump ordered the withdrawal.

Bluntly, it is so hard for any country to trust the words of any US administration. Soleimani and an Iraqi commander did in fact trusted Trump’s invitation to a peace negotiation just recently, only to be ambushed in Baghdad on orders of Trump himself.

Anyway, here’s Putin spending his Orthodox Christmas in Damascus, Syria, while the SAA is preparing for a major offensive in Idlib to clear the remaining ISIS terrorists there, and to prevent the entry of more US Forces moving out from their Iraq military bases.