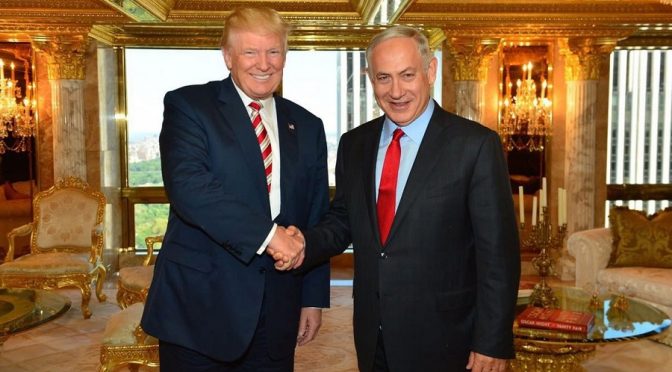 This latest revelation should not surprise anyone who has been actively following the exploits of the current Trump Administration and its partner organization, Israel’s Netanyahu government.

According to a recent report released by the Times of Israel, it was officials in Tel Aviv who provided the White House with the key intelligence details leading to the targeted double assassination of Iranian Quds Force leader, General Qasem Soleimani, and senior Iraqi PMU commander, Abu Mahdi al-Muhandis, on January 3rd.

The illegal assassinations prompted an Iranian missile strike on two US bases in Iraq, and bringing Washington and Tehran dangerously close to a larger military confrontation, until Trump stood down in the face of reprisals by Iran and its allies in the region.

This latest news also validates previous analysis by 21WIRE which concluded that Israel has been the primary source of “intelligence” provided to the White House, relating to the recent chain of events involving the United States, Iraq and Iran.

This also indicates that Israeli PM Benjamin Netanyahu was lying last week when he told ministers that the killing of Soleimani was “carried out solely by the US,” and that Israel was not involved. According to Axios:

“Netanyahu told Security Cabinet ministers Monday that the killing of Iranian Gen. Qasem Soleimani was carried out solely by the U.S. and that Israel was not involved in any way and must not be dragged into the escalating conflict, two ministers who attended the meeting told me.”

This calculated move to walk-back his previously hawkish stance on Soleimani and Iran appears to have been a shrewd and cynical political maneuver to avoid being implicated in the political maelstrom which ensued in Washington – where US Senators and Congressional Representatives were demanding the White House present any of the illusive intelligence relating to the successive incidents. Their calls were met with complete stonewalling from the Trump Administration who claimed that any discussion into the matter would be ‘helping the enemy.’

The question now is whether or not Israel also provided the White House the illusive intelligence that prompted Trump’s illegal assassination orders – the mysterious intelligence which claimed there were “imminent threats” to the United States. Elected representatives are still waiting.

The new reports now reveal how Israeli intelligence officials provided President Trump the location and reconnaissance data which resulted in the state-sanctioned murder of Soleimani. Details of the operation also appeared in an NBC News report:

Armed with a tip from informants at the airport in the Syrian capital of Damascus, the CIA knew exactly when a jet carrying Iranian Gen. Qassem Soleimani took off en route to Baghdad. Intelligence from Israel helped confirm the details.

Three American drones moved into position overhead, with no fear of challenge in an Iraqi airspace completely dominated by the U.S. military. Each was armed with four Hellfire missiles.

(…) On large screens, various U.S. officials watched as an Iraqi militia leader walked up a set of stairs to greet the leader of Iran’s Quds Force as he emerged from the airplane. It was past 1 in the morning, so the black and white infrared imagery wasn’t very clear. No faces could be seen.

It is important to note that from the onset of the Trump presidency, Israel has played a visible role in directing US policy regarding Iran. In fact, the current round of hostilities between the US and Iran was started when the White House unilaterally withdrew from the landmark international JCPOA Iran Nuclear Agreement in May 2018. Leaked recordings reveal that Israeli PM Benjamin Netanyahu boasted about his own role in convincing the White House to unilaterally withdraw from the JCPOA deal.