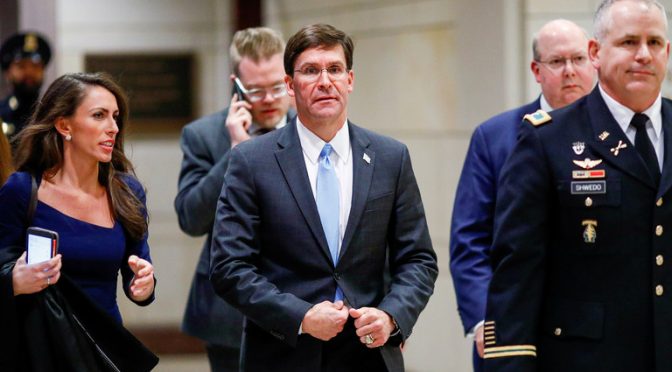 President Donald Trump warned that Iranian Major General Qassem Soleimani was planning “imminent” attacks against Americans, but his own defense secretary seems to be unable to back this claim.

Secretary of Defense Mark Esper revealed in a Sunday interview with ‘Face the Nation’ on CBS that he “didn’t see” specific evidence that supported the president’s claim that Soleimani was planning attacks on four US embassies, which Trump touted in a Friday interview with Fox News host Laura Ingraham.

“The president said that he believed that there probably could have been attacks against additional embassies,” Esper said to host Margaret Brennan. “I shared that view. I know other members of the national security team shared that view.”

“‘Probably and could have been,’ that is — that sounds more like an assessment than a specific tangible threat with a decisive piece of intelligence,” Brennan replied.

“Well, the president didn’t say there was a tangible — he didn’t cite a specific piece of evidence,” Esper said.

Asked if there was any specific evidence, Esper then replied, “I didn’t see one with regard to four embassies. What I’m saying is I shared the president’s view that probably, my expectation is they were going to go after our embassies.”

Esper later told CNN’s Jake Tapper that the president never claimed to have “specific evidence” of the imminent attacks he has warned Americans about.

The administration’s shaky reasoning for Soleimani’s assassination has earned them plenty of heat, with some saying they can’t “keep their story straight.”

“The public justification for this action has been all over the place from the beginning. They cannot keep their story straight. They’re just throwing everything at the wall and seeing what sticks. Admitting it was an ideological revenge killing would be much more honest,” journalist Mike Tracey tweeted in response to Esper’s ‘Face the Nation’ interview.

Utah Senator Mike Lee similarly criticized the administration in a CNN interview where he said it’s “frustrating” to have the president warn of “imminent” attacks, but to get “no details” about said attacks or the evidence behind the claims.

Others saw it as the latest example of Trump lying.

Secretary of State Mike Pompeo also recently failed to provide any concrete evidence about the potential danger of Soleimani when he spoke to the press. Pompeo insisted Trump was given “multiple pieces of information” in regard to “imminent” dangers against the US, but he failed to detail what that information was.

Despite struggling to explain the “imminence” of the situation, Pompeo insisted “we got it right” with the assassination. He also insisted that, “If you’re looking for imminence, you needn’t look no further than the days that lead up to the strike.”