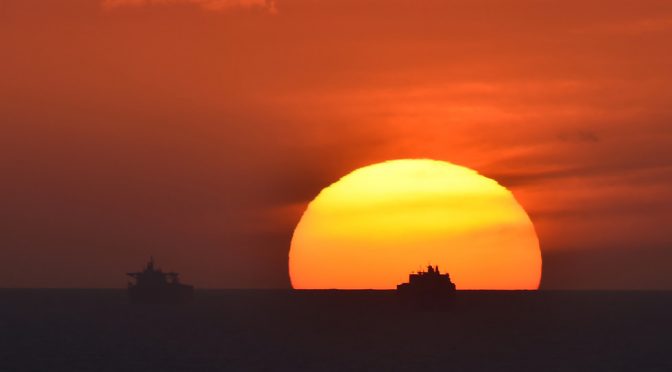 In more than one occasions, the US President Donald Trump has tweeted about how much he loves the Iranian people, and even prodded Iran government to not kill them while doing the protests against everything bad about the country. Covertly, he also pressured China not to buy oil from Iran, as part of the US-China trade deal.

Washington has managed to “cut off probably over 95 percent of the oil revenues” of Iran, according to US Treasury Secretary Steven Mnuchin.

He told Fox News that US officials are now working on the issue with China, as the country accounts for a significant part of Iran’s remaining oil exports.

“I sat down with the Chinese officials. They flew in a delegation to meet with us and the State Department to talk about this. They’ve cut off all of the state companies from buying oil, and we’re working closely with them to make sure that they cease all additional oil activities,” Mnuchin said.

He noted that the US administration’s goal is to cut off oil revenues going to “bad acts.”

“China is subject to sanctions just like everybody else,” Mnuchin said. “We actually sanctioned some of their shipping companies that were involved in the oil, and we will continue to pursue sanctions activities against China and anybody else around the world that continues to do business with them.”

He continued: “The Europeans are adhering to our primary sanctions… They would be subject to secondary sanctions, and they understand that.”

China remains Iran’s top crude oil and condensate importer. According to S&P Global Platts’ sources, in recent months a large share of Iranian oil flowing to China has been going via the UAE and Malaysia, both of which are popular hubs for ship-to-ship transfers.

Sources said oil flows to China from Iran dramatically decreased over the past year. Nevertheless, China continued offloading Iranian oil from its bonded storage in Dalian, located in the north of the country.

One can accuse China just about anything, but stupid. So, while nodding their way towards anything that Trump is trumpeting, the country is quietly ramping up oil production in Iran.

The supergiant Azadegan oil field, comprising major north and south sites, is as important to Iran’s overall strategic plan to survive the current sanctions environment and to prosper when they are lifted as the flagship South Pars supergiant gas field and the added-value products of its petrochemicals sector. Last week Iran’s Petroleum Engineering and Development Company (PEDEC) announced that five new development wells and an appraisal well are to be spudded in North Azadegan to maintain current production levels. OilPrice.com understands from various senior energy sources in Iran that this is only part of the picture, with much bigger plans having been agreed for rollout in the coming six months with the help of China and Russia.

In short, the US government’s constant anti-Iran and anti-China propaganda has always been about staying on top of the food chain, rather than establishing complementary trade and security relationships with other nations around the globe.

In fact, acquiring the huge Iranian oil and gas deposits continues to be the primary motivation of those who are part of the Israel Lobby and the DC Swamp that Trump supposedly wants to drain.

In the case with Iraq, the Trump government has continued its arm twisting and blackmail by threatening to close the country’s crucial oil trading account at the US Federal Reserve.

It wasn’t enough to mount drone attacks which assassinated Iraq’s military leadership, along with killing some 50 Iraqi police and soldiers in the process. Now, faced with the prospect of seeing its 5,000 troops and military personnel kicked out of Iraq, the Trump Administration has now resorted to blackmailing Baghdad by threatening to close the country’s crucial oil trading account at the US Federal Reserve.

More than any single move, this latest episode of international racketeering demonstrates the financial power Washington has accrued in the post-World World II era, which allows the US government to subjugate its client states by gaming the global financial system – currently dominated by the fiat US dollar.

Trump’s latest provocation came just one week after the Iraqi parliament had voted to notify caretaker Prime Minister Adel Abdul Mahdi to begin the process of expelling all foreign troops from their country.

According to a report in the Wall Street Journal, the White House warned Iraq that if it dared to kick US forces out of their country, then Washington would respond by closing down Baghdad’s access to its own dollar-denominated central banking facility located at the US Federal Reserve Bank in New York – a move which would surely trigger administrative and economic instability for Iraq.

Parliamentary Speaker Mohammed al-Halboosi outlined the risks to his country’s day-to-day operations during a floor debate on the motion, stating, “One of the steps the international community could take is to stop financial transactions with Iraq, and we would be unable to fulfill our commitments to our citizens at any moment.”

Last week, the Trump Administration also threatened Baghdad with economic sanctions as punishment should the Iraqi government proceed with ordering US troops out of their country.

The Iraqi PM Abdul-Mahdi has stated that US troops leaving the country is the only real option remaining, following a series inflammatory standoffs which have taken place over the last two weeks, after which the US no longer ‘trusts’ his country to provide security for US troops stationed there.

The Trump administration warned Iraq this week that it risks losing access to a critical government bank account if Baghdad kicks out American forces following the U.S. airstrike that killed a top Iranian general, according to Iraqi officials.

The State Department warned that the U.S. could shut down Iraq’s access to the country’s central bank account held at the Federal Reserve Bank of New York, a move that could jolt Iraq’s already shaky economy, the officials said.

Iraq, like other countries, maintains government accounts at the New York Fed as an important part of managing the country’s finances, including revenue from oil sales. Loss of access to the accounts could restrict Iraq’s use of that revenue, creating a cash crunch in Iraq’s financial system and constricting a critical lubricant for the economy.

The prospect of U.S. sanctions against Iraq arose after the Jan. 3 U.S. airstrike that killed Iranian Maj. Gen. Qassem Soleimani at Baghdad International Airport. The Iraqi parliament voted Sunday to urge Prime Minister Adel Abdul-Mahdi to work toward the expulsion of the approximately 5,300 U.S. troops.

The economic threat is real. Similar restrictions have been imposed before, as the WSJ also points out:

The financial threat isn’t theoretical: The country’s financial system was squeezed in 2015 when the U.S. suspended access for several weeks to the central bank’s account at the New York Fed over concerns the cash was filtering through a loosely regulated market into Iranian banks and to the Islamic State extremist group.

These are just some of the reasons why even if the United States, Inc. has been bankrupted for some time now, it has not fallen completely yet.

The media, military and [sinister] methods triumvirate employed by the current CEO, like his predecessors before him, have enabled the whole enterprise to continue its operations indefinitely, to the detriment of its own people and countries abroad.

What the Eastern Alliance can do is wait and be patient, hoping that there will come a day when the Americans themselves will finally rise up because they could not take it anymore.

In the meantime, the grand illusion that “All is well…” is still working.