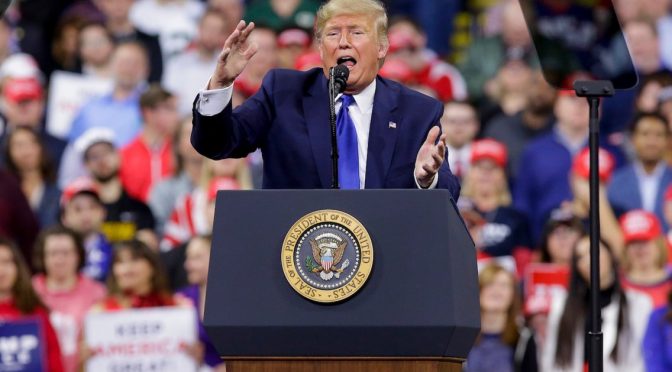 President Donald Trump’s administration has trotted out an embarrassingly inconsistent series of justifications for the recent drone strike in Iraq that killed top Iranian Gen. Qassem Soleimani. The ever-changing story of why Soleimani was killed underscores the Trump administration’s thin rationale for an action so provocative that it could have triggered an all-out war.

The day after the attack, Trump spoke from the White House. He said, “Soleimani was plotting imminent and sinister attacks on American diplomats and military personnel, but we caught him in the act and terminated him.” Trump reiterated his suggestion that Soleimani was found to be in the process of targeting Americans. He claimed in a tweet that the general “was plotting to kill many more [Americans] … but got caught!”

When pressed for specifics, Trump appeared confused over why anyone needed more explanation other than the fact that “[Suleimani] was a monster. And he’s no longer a monster. He’s dead.” The president added, “And he was planning a very big attack and a very bad attack for us and other people, and we stopped it.”

Then, on Jan. 8, Trump gave more specifics, saying, “We did it because they were looking to blow up our embassy . . . not just the embassy in Baghdad.” Trump added, “I can reveal that I believe it would have been four embassies.” The story changed, however, when Defense Secretary Mark Esper admitted on television that he had not been shown any piece of evidence that U.S. embassies would be targeted. Esper added, “I share the president’s view that probably—my expectation was they were going to go after our embassies. The embassies are the most prominent display of American presence in a country.”

In other words, the U.S. simply guessed that Soleimani would attack American embassies because they were obvious targets—a ludicrous assumption.

On Jan. 13, Trump angrily dug in his heels, insisting on Twitter that Soleimani was indeed plotting “imminent” attacks against the U.S., insisting, “it doesn’t really matter because of his horrible past!” On the same day, Attorney General William Barr switched to another explanation, telling The Associated Press, “President Trump and those of us in his national security team are reestablishing deterrence—real deterrence—against the Islamic Republic.”

At the same time, Secretary of State Mike Pompeo echoed this new plot twist in a speech at Stanford University titled “The Restoration of Deterrence: The Iranian Example.” Pompeo said, “Your adversary must understand not only that you have the capacity to impose cost but that you’re in fact willing to do so.” He added, “The importance of deterrence isn’t confined to Iran. In all cases, we must deter foes to defend freedom,” implying that the U.S. could at any time lob drone strikes to extrajudicially assassinate prominent figures of regimes it considers enemies, simply to scare them into submission. Indeed, it was Pompeo who reportedly pushed Trump into killing Soleimani and has emerged as the biggest war hawk on Iran after the resignation of former national security adviser John Bolton last year.

The U.S. has been on the brink of war with Iran numerous times, but Soleimani’s killing brought the two countries closer to a violent confrontation than ever in the past 15 years. Soleimani was no angel. He was in charge of expanding Iran’s military influence in the greater Middle East, helping keep Syria’s brutal dictator Bashar Assad in power and overseeing militia groups in Iraq that violently quashed protesters. Still, just as the extrajudicial assassination of an American war criminal by a foreign nation would be unconscionable, so was the drone strike that took Soleimani’s life.

So why did the U.S. do it? As Pompeo made clear, the Trump administration’s assassination of a top Iranian leader was meant to push the Iranian nation into submission despite the risk of triggering war. Iran’s response was to launch missiles at U.S. bases in Iraq—an action that sounds quite serious on paper. But given that the regime issued a warning of its strikes ahead of time, there were no casualties. The action helped both the Iranian regime save face—Foreign Minister Javad Zarif said his country did not, “seek escalation or war, but will defend … against any aggression”—and helped Trump save face as the American president triumphantly tweeted, “All is well!”

Trump realizes that a war with Iran would be deeply unpopular. Within days of Soleimani’s killing, grassroots protests against a U.S. war with Iran took place all over the world. The U.S. House of Representatives last week passed a resolution 224 to 194 restricting Trump’s ability to launch a strike on Iran without congressional approval. Now, Democrats in the Senate say they have the votes to pass it as well—with some Republican support—which would be a major political rebuke. An ABC News/Ipsos poll this week found that 56% of Americans disapprove of Trump’s dealings on Iran. Fifty-two percent said that Soleimani’s killing has made Americans less safe.

Indeed, there is evidence that the killing of a violent leader often does more harm than good. A political scientist named Max Abrahms explained, “Militant groups have become more violent, specifically against civilians, after the death or imprisonment of senior figures.” Citing dozens of examples from history, Abrahms summarized, “Leadership decapitation promotes terrorism by empowering subordinates with less restraint toward civilians.”

While Trump cares little about the actual impact of his policies on Americans’ safety, he does fear negative voter sentiment. The show of American military dominance is a great talking point for a leader who projects narcissistic hubris and male bravado to his gleeful base. Trump has wasted no time in centering the Iran strike in his reelection campaign speeches. A day after Soleimani’s killing, Trump spoke at a megachurch in Florida, explaining that his action was “a warning to terrorists,” and boasting about ordering the “flawless” airstrike to “terminate” the “depraved butcher.” Trump told his followers at the church, “I really do believe we have God on our side.”

At a raucous rally in Milwaukee, Wis., this week, Trump was even more emboldened, saying in crude terms, “Great percentages of people don’t have legs right now and arms because of this son of a bitch.” He conflated Democratic opposition to war with support for the general, saying, “The Democrats should be outraged by Soleimani’s evil crimes and not the decision to end his wretched life.”

In Trump’s world, there is no such thing as international law. Just as he sees the U.S. Constitution as a pesky document not worth respecting, his view of the U.S. on the world stage is based on imperial hubris and brute force. He is not the first president to recklessly endanger lives through military might, and he will sadly not be the last.

But in trying to understand his recent actions on Iran, one thing is clear: Trump killed Soleimani because he could, because he wanted to reassert American military dominance—and because he thinks it can help his chances of reelection.

Sonali Kolhatkar is a columnist for Truthdig. She also is the founder, host and executive producer of “Rising Up With Sonali,” a television and radio show that airs on Free Speech TV