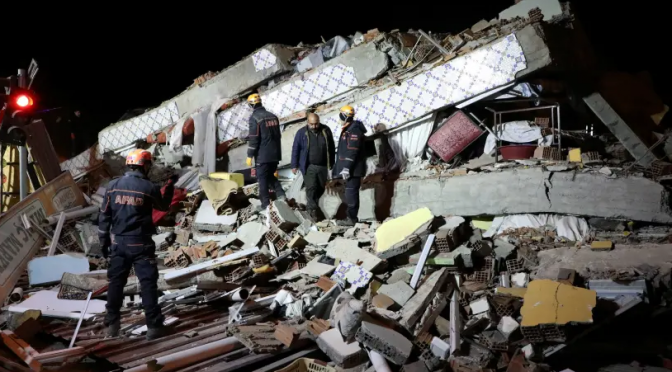 A peculiar pattern is developing over the past two weeks. As we should know by now, various countries are being hit by calamitous events, almost simultaneously.

Yesterday, China has locked down the entire Wuhan City in an attempt of containing the further spread of a novel strain of the coronavirus, which already claimed 26 deaths and 830 infections at the time of writing.

The timing of the incident is perfect, as the Chinese population is about to celebrate their Lunar New Year of the Rat.

The US-China trade war has dragged on for 18 months before a partial trade agreement, which, when examined closely amounts to nothing in terms of China’s actual commitment to purchase US agricultural products.

But for Candidate Trump, the media mileage is good enough to please his American heartland supporters for now.

The stock market, however, is not as enthusiastic as Trump.

Wuhan, by the way, is a transportation hub and capital city of the Hubei Province…

Wuhan today is considered as the political, economic, financial, commercial, cultural and educational center of Central China.[17] It is a major transportation hub, with dozens of railways, roads and expressways passing through the city and connecting to other major cities.[24] Because of its key role in domestic transportation, Wuhan is sometimes referred to as “the Chicago of China” by foreign sources. –  Wikipedia

What an easy and efficient way would it be to spread an engineered virus that is patented by The Pirbright Institute (formerly the Institute for Animal Health), a “research institute in Surrey, England, dedicated to the study of infectious diseases of farm animals,” all throughout a very large population through its transport system.

The Pirbright Institute’s funding comes from the UK government, charities, and pharmaceutical R&D outfits, i.e. 25% of its income comes from a core grant from the BBSRC of around £11m, about 50% comes from research grants from related government organisations, such as DEFRA, or industry and charities (such as the Wellcome Trust). The remaining 25% comes from direct payments for work carried out.

A similar bioweapon attack was done against China through the SARS virus purposely to eliminate the Asian genome on the face of the Earth. This was followed on through with the Tianjin nuclear blast in 2015.

Queen Liz has never been so happy about the Chinese leadership, as shown here in the video. They hang their bankers, too, much like the Iranians.

In a desperate move to win a second term, Donald Trump did the unthinkable, i.e. order the ambush of the most accomplished counterterrorism commander on the planet, Gen. Qassem Soleimani.

The action should guarantee the full support of the entire Israel Lobby for his second presidential campaign through the already rigged electoral system.

Soleimani was responsible for organizing and plotting counter-ISIS/Al Qaeda operations using local militias in various places in the Middle East where the terrorists are operating.

Two weeks ago, the long dormant, picturesque Taal Volcano erupted without early warning, and subsequently covered nearby towns and cities with volcanic ash. The volcano is just about 70 kilometers south of capital Manila in the middle of a lake.

On top of what the government can provide in terms of food and shelter, those who can absorb evacuating families are doing their best to host some of the many thousands of evacuees fleeing from the catastrophe, while the rest of the country are sending in much needed assistance.

The incumbent presidency of Mayor Rodrigo Duterte has been very consistent in uplifting the lives of the people through the elimination of income tax obligation for low income earners while tightening its grip on corruption at the Bureau of Customs, and running after the tax-evading Oligarchy.

Just recently, the president has ordered the review of all government contracts with private companies that are engaged in willful non-compliance of its stipulated commitments, or to find out if the government is at the short end of the stick.

This has been triggered after two water concessionaires, oligarchs Ayala and Pangilinan, failed to deliver the minimum quality of service and the absence of water treatment facilities, even when the consumers have already paid for them over the years that they were being billed for the service.

Moreover, he persistently asserts the full independence of his foreign policy and the sovereignty of the nation.

Taal Volcano eruption is just the latest of a series of geo-engineered events that the country has to endure. In fact, most of these attacks happened in the president’s home province in Southern Mindanao.

The large Jesuit operatives in the country are having a hard time adapting to the new reality, where a mid-termer president’s popularity continues to defy against past experience, and rise ahead of other world leaders.

More importantly, their last operation to smuggle 3,500 tons of gold was exposed and the perpetrators are under litigation in a Philippine court.

Turkey Hit with A 6.8 Magnitude Earthquake

Turkey president Erdogan has completely turned towards Russia after Putin warned him of the CIA’s plan to remove him via a coup, some years back.

Turkey is also considering a purchase of the highly effective Russian S-400 Surface to Air Missile System in defiance to Trump’s instruction.

For centuries since its inception, the United States, in the service of its UK masters, has exploited its full military potential by plundering the wealth of Asia, Africa, Latin America and other dominions.

The parasites behind the White House have grown used to the fact that they can always bomb, murder, or double talk, their way towards a one-sided cooperation from their counterparts abroad, all the time.

But long time “allies” like the Philippines do have long memories, and they will always remember how US policies could change in a wink…

All Westerners should know by now how their economies were greatly improved by the daylight robbery made on the historical assets of Asian nations, known collectively as the Collateral Accounts, close to a century ago.

Asians have already decided to repatriate their historical assets to help their respective economies this time around. This is what’s shaking up the Deep State bankers and plutocratic bloodlines in the last 2 decades, when the treaty for global development using Asian historical assets has expired.

Some portion of the Collateral Accounts were transferred from the basement of the World Trade Center, days prior to its controlled demolition on September 11, 2001.

Yes, the War of Terror was primarily just a smokescreen to retard the announcement of the maturity and scheduled return of the loaned Asian assets, which for decades served as the backbone of the Western controlled financial system.

This is also the reason why the Federal Reserve has printed more and more fiat currencies, non-stop over the last few months without really making a dent on the developing economic recession in the US.

Nobody wants to extend a lifeline to the Deep State oligarchy anymore. This decision was made clear to the bankers worldwide, as early as 2012, when thousands of banking CEOs resigned en masse.

The world can only tolerate as much pain and suffering, but the long list of crimes against humanity is too much for anyone to bear, e.g. the ongoing genocide against the Yemeni population and Palestinians.

If the West only know and completely understand what’s really going on behind the scenes that should explain why their own economies are in a freefall, perhaps they may have started taking matters very seriously.

We are in the last leg of The Endgame now.

Expect more false flag operations, continued bioweapon attacks and geowarfare, until the Western population finally realize that they, too, must act for their own survival.