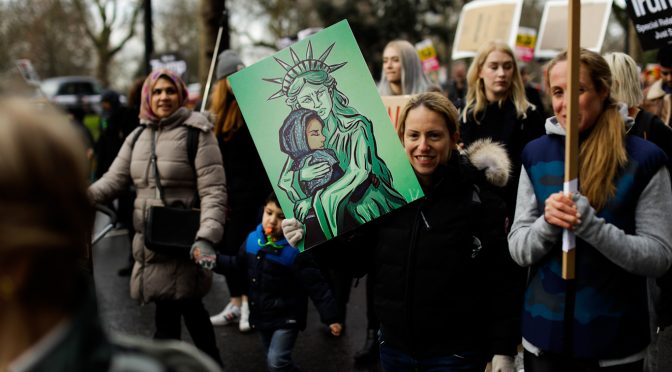 Brynn Tannehill, a defense analyst and genocide scholar, took to Twitter to warn that the necessary conditions and many of the precursor events for genocide in the US “are in motion.”

Writer, scholar and activist Brynn Tannehill came out to say that the United States, particularly under the Trump administration, is already several steps down the path towards committing genocide against certain segments of the population. In a viral tweetstorm, the navy veteran and former defense analyst claimed that immigrants, Muslims, the homeless and transgender people are most at risk, noting that India, Brazil and much of Europe are moving in a similar direction.

Tannehill, who studied genocides for her Ph.D., noted that they “rarely go from zero to all out slaughter in the blink of an eye.” Instead, preparations begin sometimes years in advance, slowly moving the population to the point of acceptance or support for an all out crackdown on demonized populations.

First, there’s the propaganda, supported by things like government reporting of the crimes committed by the people they target,” she said, “then there’s public safety measures. Removing them from the military, and from federal service. Revoking clearances. Egging on stochastic intimidation and violence and failing to prosecute people who commit it.”

With clear allusions to Trump’s Muslim ban and transgender bathroom laws, Tannehill states that revoking a targeted population’s civil rights often follows, establishing them as “lesser to the others being a key step towards what comes next. If the government, she asked, “went full Nazi on trans people, would the American population as a whole rise up? How about immigrants? Muslims?… The answer clearly seems to be almost certainly not,” she said.

However, Tannehill was at pains to stress that not every, nor even most, genocide ends in Nazi-style death camps, but that, studying the history of events like those in Rwanda, the Ottoman Empire, Darfur or Myanmar, there are “common themes and patterns” that emerge.

“Usually it happens in an economically distressed country with falling standards of living for most people,” she said, laying out a checklist of common steps towards mass killings which include:

Generally, those enacting this legislation are populists who push an “us vs. them” narrative against those they deem inferior, blaming them for the country’s poor economic state while promising to bring the country back to a mythical past of strength and respect. The “others” are defamed as criminals, terrorists, degenerates or threats to society. If this sounds familiar to you, then you are in the same boat as Tannehill, who revealed that, as a transgender woman, she is already planning to leave her Ohio home and move to Canada with her Canadian partner and children.

Laying the groundwork for genocide

Many of the conditions that Tannehill warns about already exist throughout the world. In India, for example, an openly Hindu supremacist government has come to power, with Prime Minister Narendra Modi currently trying to enact anti-Muslim and anti-transgender immigration legislation and pass citizenship laws that would allow the government to reclassify potentially hundreds of millions of Indians as illegal aliens. The NRC law, as it is called, has already been implemented in the northeastern state of Assam, where nearly two million people (more than half of them Muslim), have been declared illegal. The government is currently building a huge network of concentration camps to house them.

In the U.K., after what its Human Rights Chief called “decades of sustained and unrestrained anti-foreigner abuse, misinformation and distortion,” the United Nations has urged the British government to tackle the open hate speech of tabloid newspapers, comparing their rhetoric to Nazi media coverage of Jews in the 1930s. The government has failed to act. Indeed, populists like Nigel Farage and Prime Minister Boris Johnson have risen to prominence precisely by echoing media attacks on and demonization of foreigners, particularly Muslims. Meanwhile, in much of Europe, majorities of the population now tell pollsters that they see Muslims unfavorably. Tannehill singles out the U.K., Hungary and Poland as particularly worrying cases.

Closer to home, Brazilian President Jair Bolsonaro was elected into office promising to kill anyone he deemed a leftist: “These red outlaws will be banished from our homeland. It will be a cleanup the likes of which has never been seen in Brazilian history…Either they go overseas, or they go to jail,” he said – an ominous threat, considering the country’s history of fascist rule. Bolsonaro also constantly defames LGBT people, and last week his government charged American journalist Glenn Greenwald, possibly the country’s most prominent gay person, with cybercrimes, widely seen as a politically motivated retaliation.

In decaying and collapsing societies that are on the verge of violence, writer and journalist Chris Hedges argues that much of the population descends into magical thinking, believing in conspiracy theories and stories of past greatness. This is already happening in much of the world; a 2018 poll found that 41 percent of Trump voters and 31 percent of British people supporting Brexit believed that governments in both countries were secretly trying to make them Muslim-majority states through rampant immigration. Trump was elected on a promise to make America great again, a phrase that anti-racist educator Tim Wise argues sounds more like a threat than a promise to many Americans.

Tannehill concluded by saying, “Are you worried yet? You probably should be. Because I am very, very worried. I am not saying it will definitely happen, but the necessary conditions are there, and many of the precursor events are in motion.”