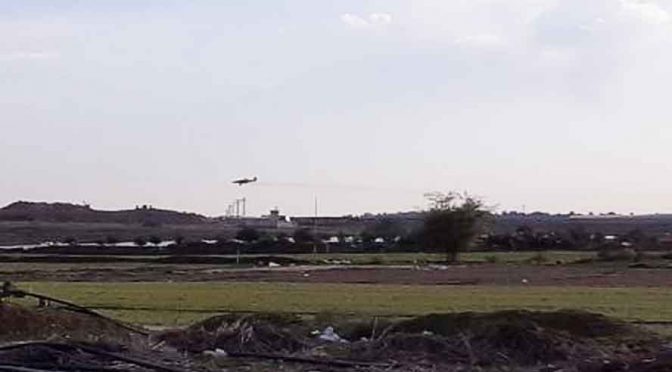 On Tuesday, January 14, 2020, Israeli crop-duster planes flew along the perimeter fence separating Gaza and Israel, spraying chemicals assumed to be herbicides into the Strip.

Israel continued to conduct aerial herbicide spraying along additional sections of the perimeter fence on Wednesday, January 15, as well on the morning of January 16. Each morning, the spraying was conducted sporadically for about four hours, with the sprayed chemicals reaching Palestinian farmlands inside Gaza.

Palestinian farmers who were working the land west of the perimeter fence on Tuesday morning told Al Mezan that at about 7:20 am, they saw plumes of black smoke emanating from Israel’s side of the fence, a practice used in the past as a means to discern wind direction.

A few minutes later, crop-duster planes flew along the perimeter fence spraying chemicals believed to be herbicides, carried by westward-blowing winds into the Strip.

Over the course of the three days, aerial spraying was conducted in areas adjacent to the fence stretching from Beit Hanoun in the north of the Strip and all the way south to the section of the fence to the east of Khan Yunis. Samples from affected fields have been sent for lab testing, and the results are expected next week.

On Thursday, January 16, human rights organizations Gisha, Adalah and Al Mezan sent a letter (Hebrew) to Israel’s Minister of Defense Naftali Bennett, Military Advocate General Sharon Afek, and Attorney General Avichai Mandelblit with an urgent demand to refrain from conducting further aerial spraying of herbicides inside and near the Gaza Strip, due to the severe damage to crops and the health risks to Gaza residents. Human Rights Defenders Call Out Israel on Dangerous Herbicides Sprayed over Gaza

[The last time Israel conducted aerial herbicide spraying was in December 2018. No incidents of spraying were recorded in 2019, which was the first year without spraying since Israel first implemented the hazardous practice in 2014. ]

In a clip produced by human rights organizations Gisha, Adalah and Al Mezan over the summer, farmers and shepherds whose livelihoods depend on access to the lands closest to the fence with Israel described the damage caused by spraying over the years and emphasized the potential of a season without spraying.

In response to Freedom of Information requests submitted by Gisha over the years, Israel has admitted to conducting aerial spraying over Israeli territory near the perimeter fence almost 30 times between 2014 and 2018. It is estimated that aerial herbicide spraying by Israel has affected a total area of 7,620 dunams of arable land in the Strip.

In July 2019, the London-based research agency Forensic Architecture published a multi-media investigation into the practice, based in large part on research and legal work by Gisha, Adalah, and Al Mezan. The report strengthened the organizations’ findings whereby aerial herbicide spraying by Israel has damaged lands deep inside the Strip.

In their letter, Gisha, Adalah and Al Mezan stressed that such disproportionate action, with detrimental impact on livelihoods and the health of the civilian population, is unlawful under both Israeli and international law. The organizations call on Israeli authorities to put an immediate stop to all aerial spraying activities in and near the Strip in order to allow Gaza’s farming sector to develop and prosper.

Everyone should understand that Israel is not only spraying herbicides on Palestinian farm lands, as if that isn’t revolting enough, the Israelis are also spraying their raw sewage on Palestinians homes, and during protests against the occupation.