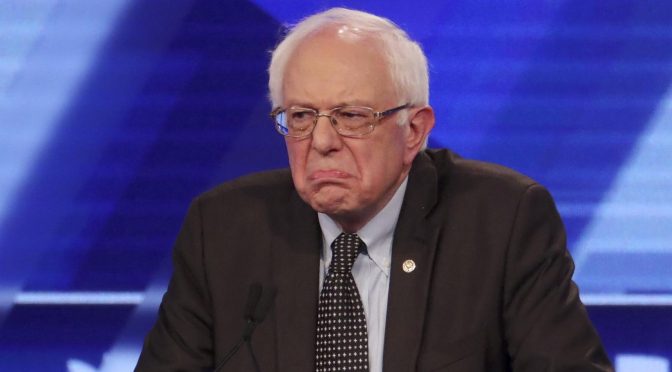 It’s amazing to think how the entire American media and political Establishment has been banging on ad nauseum for the last four years running, telling the public that the biggest threat to the integrity of their fragile western democracy and fleeting freedoms – was the Russians.

We’re now told that the Democratic Party’s opening act for the 2020 Presidential Elections – the Iowa Caucuses, has descended into chaos after the release of voting results from the state’s precincts were delayed due to “inconsistencies in voter data” which was meant to be reported accurately via a new digital mobile app commissioned by esteemed members of the party’s elite high committee.

Normally, Iowa results are released a few hours after the polls close, but this year that didn’t happen.

Numerous internal party arguments have now broken out, with opposing camping attacking different people, all but guaranteeing more in-fighting and controversy in what is already turning out to be the ultimate internecine war.

The biggest loser here, clearly, is front-runner Bernie Sanders, who has been deprived of the certain momentum he would have had with the announcement of a resounding victory in Iowa.

As a result of the chaos, more marginal candidates like Amy Klobuchar and Pete Buttigieg, are now claiming to have ‘won’ the state, although it will be hard to tell who is speaking truth and who is trying to take advantage of the chaos in order to artificially inflated their performance.

As of this morning, voters are still waiting for Final results, and even then , those may be contested now that confidence in the system has been shaken.

The ‘glitch’ came about after Democratic Party activists manning some 1,700 precincts had downloaded the new app on their smart phones in order to submit voter data from the caucus sites, over to the party’s central headquarters. It’s still unknown exactly how the app distorted the voting results, and will no doubt be the subject of much argument and speculation in the coming days and weeks.

The firm behind the shady app is called Shadow Inc, owned by the Democratic Party nonprofit group Acronym. As it turns out, many of the people behind this new election technology are former Hillary Clinton staffers.

This may just be a coincidence, but it is certain to fuel existing distrust and skepticism among Democrat voters, especially in light of the previous exposure of how the 2016 Hillary Clinton campaign had colluded with the Democratic National Committee (DNC) operatives to prevent candidate Bernie Sanders from winning his party’s nomination.

None of this should come as any surprise to voters who have been raising the alarm about voting fraud and voting irregularities for decades. But this situation is unprecedented.

Many suspected a scandal was afoot on Sunday, after it was announced that the traditional benchmark Des Moines Register poll of likely Iowa Democratic caucus goers – would not released as per normal on Saturday night. Apparently, the poll was shelved due to the efforts the Pete Buttigieg’s campaign who claimed the poll was ‘unfair.’ Buttigieg was seen to be in discussions with operatives at CNN at this time. Their operation to submerge polling results damaged front-runner Bernie Sanders who was expecting to capitalize on announcements of a wide lead going into the Caucuses.

For Sanders campaigners, it seemed that the fix was in. Only, they never imagined how bad things would get on Monday evening.

Just days before this, Hillary Clinton, still reeling from her 2016 epic loss, took to national media to attack the Sanders campaign in a move which many believe is part of a wider DNC establishment level effort to undermine front-runner Bernie sanders – who Clinton and Biden operatives believe is too far left for the Democratic Party and has ‘no chance’ to beat Donald Trump’s re-election bid come November.

Make no mistake about it: as of this morning, public confidence in the Democratic Party has hit an all-time low. – 21Wire