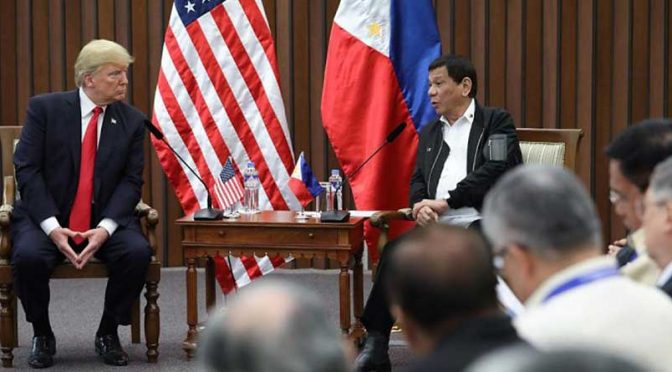 True to his word and to his own government’s independent foreign policy, the Philippine President Rodrigo Duterte has reiterated one more time that he will move for the scrapping of the grossly one-sided Visiting Forces Agreement with the United States, in spite of the desire from the Donald Trump administration to save it.

Despite Trump’s efforts, Duterte said he refused to change his position to scrap the agreement stressing that American lawmakers were “rude” for demanding the release of Senator Leila de Lima who is currently detained at the Philippine National Police Custodial Center at Camp Crame in Quezon City due to her involvement in illegal drugs.

President Rodrigo Duterte has ordered the termination of a longstanding military pact with the U.S, though the U.S. State Department reiterated that relations between the nations remain strong. The pact sets the terms for U.S. military personnel operating in the Philippines.

Presidential spokesman Salvador Panelo echoed Duterte’s threat in January to end the agreement after Washington canceled a visa for a senator who used to lead his drug war, considered an affront to the president himself who had warned the CIA not to meddle in his administration’s efforts to rid the country of illegal drugs and drug lords.

“It’s about time we rely on ourselves, we will strengthen our own defenses and not rely on any other country,” Panelo told a news briefing, quoting the president.

According to pro-US skeptics, such a move could upend the decades-long alliance as Beijing continues its rise as a military power from the contested waters of the South China Sea to nations across Asia. The threat hasn’t been officially confirmed by the government. The U.S. has been seeking to reassure allies in Southeast Asia of its commitment to the region.

Duterte, of course, has proven to be an expert in tactics, and we read this simply as a way of aligning with an Asian neighbor, rather than antagonizing it for the benefit of a long-standing master thousands of miles away.

A State Department official said in an emailed statement on Saturday that the U.S.-Philippine alliance remains a cornerstone of U.S. efforts to promote a free, open, and secure Indo-Pacific region, citing comments by Secretary Michael Pompeo and Pentagon chief Mark Esper on their visits to Manila last year.

The U.S. alliance with the Philippines is its oldest in the region and remains as important as ever, the official said.

Duterte “has made threats in the past to scale down Manila’s security relations with Washington, and he’s never followed through,” said Michael Kugelman, deputy director of the Asia Program at Washington-based Wilson Center. “The reality is that the Philippines may seek China’s economic largess, but there’s no substitute for the U.S. defense umbrella.”

Since becoming president in 2016, Duterte has repeatedly threatened to “break up” the Southeast Asian nation’s alliance with the U.S., while warming ties with China.

The presidential cabinet is populated mostly of pro-US technocrats hell-bent of preserving their own personal ties with the US.

Locsin told a Senate hearing on Thursday that terminating the pact will “negatively impact” defense and economic ties between the two nations.

While, Philippine Defense Secretary Delfin Lorenzana said on Saturday that there are no official orders so far to Cabinet officials to notify the U.S. on ending the military agreement.

Pompeo said last year that the mutual defense treaty with the Philippines would apply if its vessels or planes were attacked in the South China Sea.

U.S. President Donald Trump is trying to save his country’s military pact with the Philippines, according to President Duterte. But the Southeast Asian nation leader said he’ll scrap it just the same.

“Trump, and the others are trying to save the Visiting Forces Agreement,” Duterte said in a speech in Manila on Monday night in a mix of English and the local language. “I said, I don’t want it,” according to the official transcript.

The agreement that sets the terms for American soldiers to conduct military exercises in the Philippines hasn’t solved the decades-long communist insurgency, said Duterte.

While there might be some advantages for those who have facilitated the VFA with the US in Congress and in the military hierarchy, a number of disadvantages of having a military alliance with the US need to be discussed, to wit:

No less than the AFP Chief himself says that there’s no huge impact from the abrogation of the Visiting Forces Agreement with the US.

More than anything else, the decision of the president to abrogate the VFA is a strong statement of the desire of the country to craft its own destiny, since its revolution against the 400-year Spanish rule in 1896 was usurped by the US through the Treaty of Paris.

US Military Reputation has Deteriorated Globally

The mythical righteousness of US forces worldwide continues to deteriorate. More so after the Gen. Qassem Soleimani assassination on Trump’s order.

On January 5, the Iraqi parliament voted overwhelmingly in favor of a resolution calling for the expulsion of all foreign forces after the US assassination of Iran’s General Qassem Soleimani and his Iraqi trenchmate Abu Mahdi al-Muhandis.

In Syria, civilians are directly confronting the US troops at every opportunity they have…

Just like the long exploitation of Philippine resources, which the present government wants to free itself from, the Arabs are also rejecting the uninvited US forces in their countries, which only serve to protect the US private companies in the unfettered extraction of the energy resources in the region.