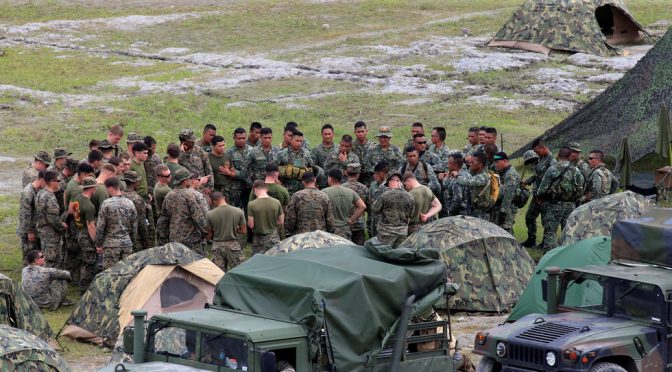 The scrapping by the Philippines of a military partnership with the US occurs with rather embarrassing timing for Washington, as it seeks to rally its allies to adopt America’s hostile line towards China.

Evidently, the Southeast Asian nation has decided it doesn’t need Washington’s presumed military ‘protection’ and is confident it can conduct normal relations with China and neighboring states without American mediation.

Other Asian nations under Washington’s tutelage – including Japan and South Korea – might just come to the same conclusion, thus prompting a ‘domino effect’ with a modern twist.

Pentagon chief Mark Esper told the Munich Security Conference at the weekend that the world needs to “wake up” to China as a growing security threat. That’s not the way Manila sees it.

Only days before the annual Munich gathering, the Philippines’ President Rodrigo Duterte announced his country was terminating the 1998 Visiting Forces Agreement (VFA) with the US. It will take six months to formalize the termination. The move is part of his “pivot to China” which has been underway since his election in 2016.

That move appeared to take Washington by surprise. But it delivers on previous promises made by Duterte to say “goodbye” to the US in favor of closer economic and political ties with China.

Mindful of how the setback would jar with his anti-China mantra in Munich, Esper expressed chagrin over Manila’s decision to abrogate the military partnership.

“I do think it would be a move in the wrong direction as – as we both bilaterally with the Philippines and collectively with a number of other partners and allies in the region are trying to say to the Chinese, ‘You must obey the international rules of order. You must obey, you know, abide by international norms,’” Esper told reporters en route to Europe.

By contrast President Donald Trump took a more sanguine view of the move by the Philippines. He said he didn’t mind because it would “save the US a lot of money” through cancelling the many joint military exercises conducted every year with the Philippines.

Trump’s glib reaction is no doubt typical of his superficial, transactional view of US foreign relations.

The deeper strategic view, however, which the Pentagon planners are well aware of, is that the loss of the Philippines as a base would be a huge blow to its force projection in the South China Sea, aimed at curbing China.

“Great Power rivalry” has re-emerged as a guiding concept at the Pentagon in recent years. Several strategic planning documents have explicitly targeted China and Russia as the main geopolitical adversaries overtaking purported threats from terrorism and rogue states – in a throwback to the Cold War decades.

What’s really at stake is Washington trying to maintain its ambitions of global dominance, economically and militarily. This unipolar worldview is at odds with a multipolar international arrangement in which China and Russia participate as partners with the US, Europe, the Americas, Asia and Africa. Thus, in order to pursue dominance, Washington is obliged to create adversarial conditions of “us and them”; pro-US or pro-China, and so on.

We see this being played out clearly with regard to Russia’s Nord Stream 2 gas pipeline project for Europe. Washington continually browbeats the Europeans to cancel that project, using the blackmail of national security allegations. This is the same US ploy used regarding China’s Huawei telecoms firm.

In the South China Sea, Washington has habitually intervened in territorial disputes between China and a host of other nations in such a way as to polarize the conflicts. The US policy is to paint Beijing as a malign threat to the region which in turns allows the Americans to build up military forces ostensibly to “protect” partnering nations. But the real aim of these “freedom of navigation” exercises conducted by the US is to encircle China with military powers.

China’s economy depends on the South China Sea for maritime trade routes, through which an estimated $5 trillion of goods are shipped annually. American warships and bases in Southeast Asia pose a tacit threat to China whereby it could be blockaded economically. That gives Washington leverage in trade and political negotiations.

It is a remarkable snub to Washington’s adversarial worldview that the Philippines has announced it no longer wants to participate in a military alliance with the US – an alliance that goes back nearly seven decades following the end of the Pacific War in 1945.

President Duterte has long voiced a desire to embrace China as an economic partner. He says the territorial disputes between the two nations over the South China Sea can be resolved through negotiations.

China, for its part, has welcomed Duterte’s realignment. Beijing had earlier offered billions of dollars in investment in a range of flagship infrastructure projects. Critics of the Filipino leader have pointed out the delay in promised investment and have cautioned that he may be giving too many concessions to Beijing over territorial claims.

What will also bother US strategic planners, in addition to the logistical setback of losing the Philippines as a military power-projecting base, is a modern twist on the “domino effect.”

During the Cold War, Washington feared the spread of Communism through a domino effect, whereby nations would be inspired by the Soviet Union or China to throw off their allegiances with America. The decade-long Vietnam War was fought by the US driven by such an apprehension in Washington, of a spreading indifference to American influence.

For the Philippines to reject US military partnership is a severe blow to America’s global status. It is an audacious put-down to Washington’s self-importance as a protector.

President Duterte rightly understands that the only viable way forward is for nations to cooperate through genuine partnership and dialogue. The American way of polarizing and antagonizing is a dead-end.

No doubt several other nations in the Asia-Pacific region have taken note of the new direction being charted by Manila. Far from it being the “wrong direction”, as Washington asserts, they might well conclude that it’s time to take the same path.

Finian Cunningham is an award-winning journalist. For over 25 years, he worked as a sub-editor and writer for The Mirror, Irish Times, Irish Independent and Britain’s Independent, among others.