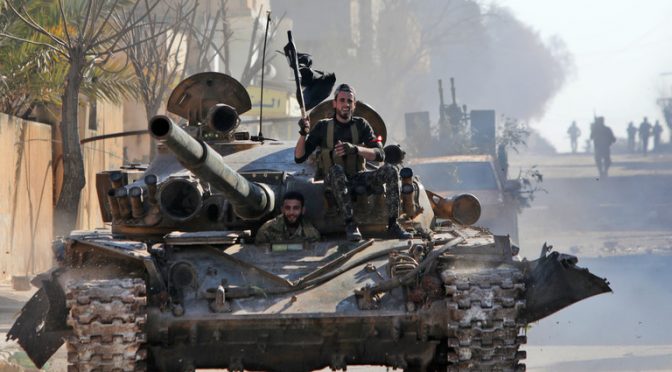 There are multiple terror factions operating in Syria, as there are multiple parties that have contributed to the efforts to bring down the Assad government since 2011, e.g. MOSSAD, CIA, Saudi, Turkey, US and UK. Turkey has provided the exit route for the smuggling of Syrian oil in 2011 onwards, and the subsequent escape of ISIS terrorists back to the UK, Canada and Europe, over the last 2 years.

The Russians have provided all the peaceful mechanisms for Turkey to extract its terrorist assets in Idlib, the last ISIS stronghold in Syria, within specific timeframes. But Turkey President Edogan is abusing Putin’s patience, all the time:

The Defense Ministry said that the Russian Reconciliation Center for Syria was in constant contact with Ankara, “regularly” requesting and receiving information on the whereabouts of Turkish troops. And, according to the data submitted by Turkey, there were no Turkish soldiers near Behun when the Syrian Army was fighting terrorists there.

Turkish officials have slammed Damascus for the airstrike. Vice President Fuat Oktay warned that the Syrian “regime elements will pay a heavy price for this treacherous attack.”

It is not the first time that Russia has accused Ankara of failing to properly notify it and the Syrian government about the movement of Turkish military inside the Idlib “de-escalation zone.” Earlier this month, six Turkish soldiers were killed when their convoy came under fire west of Saraqib after they moved there “without informing the Russian side,” Moscow said at the time.

Back in 2015, a Russian Su-24 bomber shot down by a Turkish F-16 jet during an anti-terrorist sortie in 2015, which led to a major crisis in relations between Moscow and Ankara. Later, Putin forgave Erdogan for the incident.

For some reasons, Erdogan believes that they have the right to be in Syria, and it is perfectly alright to fool the Russians whenever they can. For this old man’s imperialistic ambition, a number of Turkish soldiers recently paid the ultimate price…

At least 33 Turkish servicemen have been killed in an airstrike in Syria’s Idlib province, while an unspecified number of soldiers were injured. Turkish officials attributed the strike to the Syrian military.

“In Idlib, Turkey’s armed forces were targeted by the regime elements in an airstrike,” Hatay province Governor Rahmi Dogan told the media late on Thursday. While he originally said that nine soldiers had been killed, minutes later the death toll was revised to 33, the Turkish Anadolu Agency (AA) reported, citing the governor.

More Turkish servicemen have been injured in the airstrike, but their number is so far unclear. Dogan’s statement comes amid a high-level Turkish security meeting, reportedly chaired by President Recep Tayyip Erdogan and presumably focused on the incident.

Erdogan is hedging his bet on the potential entry of the US and NATO forces in Idlib, and the usual calibrated response of the Russians when it comes to dealing with US/NATO forces in the region.

The problem for Erdogan, however, is that the Syrian Armed Forces are hell bent in recovering the Idlib province with everything they’ve got, and against whoever is on the other side.

“… the Syrian Armed Forces, which are still engaged in fierce clashes with militants that include an Al-Qaeda affiliate, clearly have no intention of pulling back. The troops loyal to Damascus continue to liberate cities and towns in the south of the province in their quest to take back a strategic highway linking the nation’s second most populous city of Aleppo to the major port and the capital of the western coastal province of Latakia. “

Funding and logistical support for the ISIS/Al Qaeda terrorists have already waned down after it was made clear that the Assad government is not about to fall with the military backing of the Russians. So, Turkey, Israel, Saudi Arabia, US and UK are now in a great quandary about what to do with these surviving terrorists in Idlib.

Just like in Libya, NATO and Pentagon leaderships never have any exit plan post-destruction of any of its targeted countries. They’ve already tried sending these armed goons to Xinjiang China, Indonesia and the Philippines, but the terrorists failed to establish a new ISIS caliphate in these areas.

As tensions in Idlib province reach the boiling point, Erdogan asked Putin “to get out of the way” and let the Turkish troops deal with Syrian President Bashar Assad, the Turkish leader told his AK Party on Saturday.

Erdogan was explaining to lawmakers his government’s handling of the escalation in the northwestern Syrian province of Idlib, where Turkish and Syrian troops have engaged in several clashes over the past weeks. The hostilities have all but ruined Turkey’s 2018 agreement with Russia on de-escalating the violence in the area, which remains the last major stronghold of anti-government forces in Syria.

Describing his phone conversation with Putin, Erdogan said if Russia’s interest in Syria was to keep a military presence there, Turkey, a NATO member, does not object to it.

I asked Mr Putin: What’s your business there? If you establish a base, do so but get out of our way and leave us face to face with the regime.

Moscow intervened in the Syrian conflict in 2015 to help Damascus fight against jihadist groups. Moscow said helping the Syrian government prevented future attacks launched by this would-be entity against other nations, including Russia.

The bigger picture, of course, is that, while the global effort to defeat the criminal cabal in the highest echelons of power in the West has taken some setbacks with China still unable to contain the COVID-19 bioweapon attack, after the Western financial bankruptcy has already been proven to be an undeniable reality, the effects of the disruption of the supply chain from Chinese manufacturing sector to Western companies all points to the fact that the West is no longer in total control of the global economy.

From all indications, the COVID-19 attack on China is really just a desperate Samson Option, which may delay the full implementation of the One Belt One Road Project for sure, but would certainly hurt the West, too, as local infections faster than in China is already being felt in the US and Europe.

It doesn’t need a stretch of the imagination to conclude that the Western oligarchy is aiming for the establishment of a dystopian society that capitalizes on all advancements in surveillance technology, in order to ensure that the future of the West is still under their absolute control.

… while the Eastern Alliance is attempting to give everyone an equal opportunity for tangible economic progress.

While the US is busy establishing military bases all around its perceived enemies, China is busy building infrastructure of massive economic potential all throughout Eurasia.

The last video about the inauguration of the Power of Siberia gas pipeline to China is another Eastern Alliance checkmate against the power hungry Western Deep State.

The Deep State is now as vulnerable as ever. Yet, the absence of widespread condemnation of the Trump government’s attempt at extraditing Julian Assange to the US is an indication of Western apathy and political immaturity.

Just imagine if the Americans are acting directly to rid themselves of the Deep Swamp instead of merely electing a president who will “do the job” for them, but in reality prioritizes Adelson’s and the Israel Lobby’s interest instead.

We still have a long way to go.