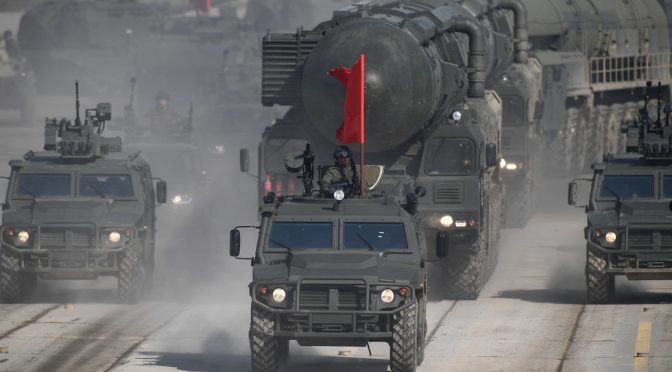 In response to the threat of a “flexible first strike” from NATO, Russia President Vladimir Putin has committed to establishing a condition where no country will ever contemplate of attacking Russia.

According to an RT report,

Vladimir Putin has confided that US President Donald Trump privately lamented the “insane” US military budget. He also says Russia protects itself by making the costs of attacking the country too high for anyone to contemplate.

“The US has outstripped us” in terms of annual defense expenditure, the Russian president said in a new episode of news agency TASS’s ‘20 Questions to Vladimir Putin’ series. But being the world’s largest military spender doesn’t really make Donald Trump particularly happy, Putin said.

“Donald told me that they have adopted an insane [military] budget for the next year, $738 billion.”

The US commander-in-chief, who likes to talk up his country’s military hardware during overseas trips while bragging about the armed forces, tends to be more reserved in private, according to Putin. “He told me that the costs were too high, but he had to do it,” he said, describing his counterpart as “an advocate of disarmament, as he says.”

In terms of military spending, Russia trails behind China, Saudi Arabia, the UK, France, and Japan, with a defense budget worth $48 billion, although its lower cost base gives it more purchasing power than most western states. “Moreover, our annual expenditures are falling. In contrast, other countries’ spending has been rising,” Putin stated.

Putin also explained why Trump – who already dismantled the landmark Intermediate-Range Nuclear Forces Treaty the US signed with the old Soviet Union – is reluctant to talk non-proliferation and arms control.

“That is another question, this is a question which relates to the understanding of security and how to ensure it… We can discuss this topic,” the Russian president replied without going into details.

Another crucial treaty which now hangs in the balance is the Strategic Arms Reduction Treaty (START), which dramatically reduced the number of nuclear warheads and the means of delivery.

The current edition of the pact, known as New START, was signed by former US President Barack Obama and his then-Russian counterpart, Dmitry Medvedev in 2010. It is set to expire in February next year.

While Moscow has signaled its readiness to prolong the treaty immediately, the US has kept silent on the matter.

This revelation is groundbreaking considering the fact that it confirms beyond any shadow of doubt that Trump, and all those who came before him, were actually not in full control of their own administrations’ foreign policy and military doctrine, but something else.