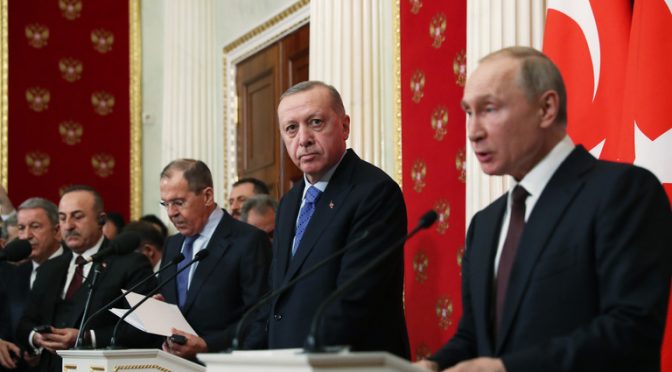 In recent weeks, Sultan Erdogan is testing Vladimir Putin’s resolve in defending Syrian sovereignty by sending more Turkish troops to aid the remaining ISIS terrorists at their last stronghold in the Idlib province. Erdogan even complained about what the Russians are doing in the area, as if the region is still under the reign of the Ottoman Empire.

This week’s meeting between Presidents Putin and Erdogan in Moscow was cast as preventing a war between Russia and Turkey in Syria. War, however, was never on the horizon. Putin called Erdogan’s bluff, and the Turk folded.

Russian President Vladimir Putin and Turkish President Recep Erdogan, accompanied by their respective senior national security advisers, met in Moscow on March 5. The purpose of this emergency summit was to negotiate the terms of a ceasefire that would bring an end to heavy fighting in Syria’s Idlib province that threatened to draw their two nations into direct military conflict.

After more than six hours of meeting, a new agreement, packaged as an “additional protocol” to the “Memorandum on Stabilization of the Situation in the De-escalation Area as of September 17, 2018” (better known as the “Sochi Agreement”), was agreed to by both parties.

Over the course of a week, from February 27 through March 5, Syria’s Idlib province transitioned from being ground zero for a war between the Syrian army and allied forces, and heavily armed groups opposed to the rule of Syrian President Bashar Assad, into a geopolitical powder keg that threatened to pull the Turkish and Russian militaries into direct conflict with one another.

On March 1, Turkey, following up on threats previously made by President Erdogan to drive the Syrian Army and its allies back to the line of demarcation set forth in the original Sochi Agreement, unleashed a major offensive, dubbed “Operation Spring Shield” and involving thousands of Turkish troops fighting alongside anti-Assad formations.

This operation soon fizzled; not only was the Turkish advance halted in its tracks, but the Syrian Army, supported by Hezbollah and pro-Iranian militias, were able to recapture much of the territory lost in the earlier fighting. Faced with the choice of either escalating further and directly confronting Russian forces, or facing defeat on the battlefield, Erdogan instead flew to Moscow.

The new additional protocol, which entered into effect at midnight Moscow time on Friday, March 6, represents a strategic defeat for Erdogan and the Turkish military which, as NATO’s second-largest standing armed force, equipped and trained to the highest Western standards, should have been more than a match for a rag-tag Syrian Army, worn down after nine years of non-stop combat.

The Syrian armed forces, together with its allies, however, fought the Turks to a standstill. Moreover, the anti-Assad fighters that had been trained and equipped by the Turks proved to be a disappointment on the battlefield.

One of the major reasons behind the Turkish failure was the fact that Russia controlled the air space over Idlib, denying the Turks the use of aircraft, helicopters and (except for a single 48-hour period) drones, while apparently using their own aircraft, together with the Syrian Air Force, to pummel both the Turkish military and their allied anti-Assad forces (though neither side has officially confirmed the Russians bombing the Turks – that would be a disaster for the talks).

In the end, the anti-Assad fighters were compelled to take shelter within so-called ‘Observation posts’– heavily fortified Turkish garrisons established under the Sochi Agreement, intermingling with Turkish forces to protect themselves from further attack. Operation Spring Shield turned out to be a resounding defeat for the Turks and their allies.

Under the terms of the original Sochi Agreement, the Turkish military was supposed to oversee the removal of heavily armed anti-Assad forces, including Hayat Tahrir al-Sham (HTS), a designated terrorist organization, from so-called ‘de-escalation zones.’ The failure to accomplish this task, coupled with continued attacks against Syrian positions by HTS fighters, prompted the Syrian Army’s attack in Idlib. The additional protocol negotiated this week in Moscow “reaffirms” the Turkish and Russian “dedication” to “combat all forms of terrorism” and to “eliminate all terrorist groups in Syria”.

How this will be implemented is not spelled out in the additional protocol, indeed, given the fact that the majority of the anti-Assad forces that have sought refuge in the Turkish observation posts are HTS fighters that had, just a week before, been provided arms and vehicles to carry out attacks coordinated with the Turkish Army, the practicalities of implementation appear non-existent.

The agreement also focuses on another critical, yet unfulfilled, aspect of the original Sochi agreement – the guarantee of safe passage along the strategic M4 and M5 highway corridors connecting the city of Aleppo with Latakia (M4) and Damascus (M5). The inability and/or unwillingness on the part of the Turks to follow through with this provision was the major impetus behind the current Syrian offensive in Idlib.

Indeed, the Syrian Army was able to gain full control of the M5 highway and was in the process of doing the same for the M4 highway when the Moscow agreement brought an end to the fighting.

Under the terms of the additional protocol, the new zones of de-escalation will be defined by the frontlines as they currently exist, securing the hard-won advances made by the Syrian Army and embarrassing Erdogan, who had promised to drive the Syrians back to the positions as they existed at the time of the original Sochi Agreement.

Moreover, the M4 highway will now be buffered by a 12-kilometer security zone (Six kilometers on each side), and will be jointly patrolled by Turkey and Russia, guaranteeing secure passage for commercial vehicle traffic. These patrols will begin on March 15, which means the Turks have ten days to oversee the evacuation of anti-Assad forces from this corridor–in effect, pushing them back north of the M4 highway, which was the goal of the Syrian offensive to begin with.

Back in line, but for how long?

While couched as a ceasefire agreement, the additional protocol produced by the Moscow summit between Putin and Erdogan on Thursday is a thinly disguised instrument of surrender. The Syrian government got everything it was looking for by launching its offensive, and the Turks and their anti-Assad allies were left licking their wounds in a much-reduced Idlib pocket.

Beyond preventing direct conflict between Turkey and Russia, the additional protocol achieves little that changes the situation on the ground. Turkey is still faced with the task of disarming the HTS fighters it currently embraces as allies, and the humanitarian crisis triggered by hundreds of thousands of refugees displaced by the earlier fighting remains.

In many ways, the additional protocol, like its antecedent, the Sochi Agreement, is an arrangement designed to fail, because by succeeding it only perpetuates an unsustainable reality that will only be resolved when the totality of Syrian territory is restored to the control of the Syrian government.

Scott Ritter is a former US Marine Corps intelligence officer. He served in the Soviet Union as an inspector implementing the INF Treaty, in General Schwarzkopf’s staff during the Gulf War, and from 1991-1998 as a UN weapons inspector. Follow him on Twitter @RealScottRitter