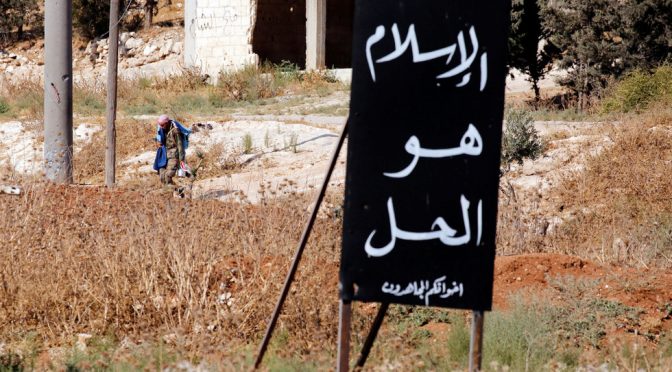 The State Department’s special envoy for Syria has just admitted that the US aims to defend jihadist militants in Idlib against ‘Russian aggression,’ proving once again that the swamp in Foggy Bottom is alive and well.

Russia and the Syrian government “are out to get a military victory in all of Syria,” Ambassador James Jeffrey told reporters on a conference call out of Brussels on Tuesday.

Our goal is to make it very difficult for them to do that by a variety of diplomatic, military, and other actions.

To illustrate these methods, Jeffrey cited the US threat to respond “in a very savage military way” against any chemical attacks, which he described as “a favorite tactic of the Syrian regime in making advances.” This is factually untrue, since the alleged attacks always happen after Syrian Army victories, as a pretext for US intervention.

Jeffrey also noted that there are US and coalition troops in parts of Syria – officially there to fight Islamic State (IS, formerly ISIS), but in actuality “guarding” the oil fields. He tellingly described their presence as “a complication” for the Syrian government.

Jeffrey and US ambassador to Turkey David Satterfield were in Brussels after Turkish President Recep Tayyip Erdogan’s visit, to discuss ways the US and NATO can help Ankara protect its pet militants in their last remaining redoubt – Syria’s Idlib province.

But while Satterfield described Idlib as containing “three million-plus innocent civilians, the majority of whom are women and children,” and accused “Russian aggression” of seeking to displace them, listen to how Jeffrey chose to describe the situation, when asked by a CNN reporter if NATO was considering sending in ground troops:

I think you can forget ground troops. Turkey has demonstrated ably that it and its opposition forces are more than capable of holding ground on their own.

This is either appallingly ignorant or downright delusional, as the Syrian army had successfully rolled up the Turkish-backed militants and the ceasefire Ankara agreed to in Moscow last week confirmed that.

The real revelation here is that the militants are described as Turkey’s “opposition.” Contrast this with the words of Colonel Myles Caggins, spokesman for the anti-ISIS coalition’s military arm, just three weeks ago:

“Idlib province seems to be a magnet for terrorist groups, especially because it is an ungoverned space in many ways,” Caggins told Sky News. “There are [a] variety of groups there — all of them are a nuisance, a menace and a threat to… hundreds of thousands of civilians who are just trying to make it through the winter.”

Bear in mind that Jeffrey doubles as Washington’s special envoy to the coalition against IS, that infamous Schroedinger entity that either doesn’t exist any more – when US President Donald Trump seeks to claim victory against the self-proclaimed caliphate – or is about to make a resurgence big time and requires US military presence in perpetuity to prevent that, as the State Department and the Pentagon prefer to see it.

Needless to say, this entrenched insistence on legacy policies doesn’t do much for Trump’s promise to pull out US troops from “endless wars” in the Middle East.

Neither Jeffrey nor Satterfield, nor any of the reporters asking them questions, mentioned even once the existence of Hayat Tahrir al-Sham – the latest incarnation of the notorious Al-Nusra, an Al-Qaeda affiliate whose fighters dominate the ranks of the militants in Idlib. Listening to them, one might think it doesn’t exist!

Jeffrey and Satterfield openly admit that an outright Syrian victory over these terrorists would deny the “international community” – as they style the US and its allies – the leverage to insist on regime change in Damascus. Which is incredibly rich in irony given that the sole legal pretext on which the US has any troops in Syria, in open violation of international law, is a congressional authorization to use force against… Al-Qaeda.

Nebojsa Malic is a Serbian-American journalist, blogger and translator, who wrote a regular column for Antiwar.com from 2000 to 2015, and is now senior writer at RT. Follow him on Twitter @NebojsaMalic