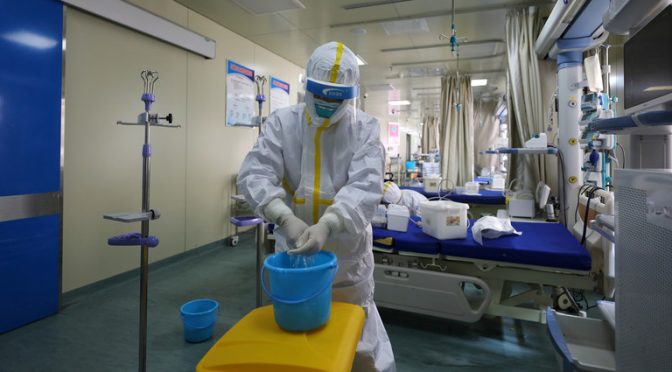 China has declined to distance itself from the accusations made by a foreign ministry spokesman alleging US involvement in the coronavirus epidemic, arguing that opinions vary on how the health crisis started.

Chinese foreign ministry spokesman Geng Shuang wouldn’t comment on Friday about remarks made by colleague Zhao Lijian. Instead, the ministry official stated that the international community had differing opinions about the origin of the Covid-19, Reuters reported. Geng also chose not to discuss whether Zhao’s theory — that it may have been the US military that brought the deadly disease to Wuhan — matched Beijing’s official position.

Geng had earlier lashed out at Washington for claiming that Beijing had engaged in a “cover-up” to hide the outbreak, widely believed to have begun in China’s Hubei province. He told reporters that now was the time to “come together to fight [the virus] instead of leveling accusations and attacks against each other, which is not constructive at all.”

The theory put forward by Geng’s colleague on Thursday caused a flurry of activity on social media. In a tweet, Zhao shared a video of Centers for Disease Control and Prevention (CDC) director Robert Redfield apparently disclosing that the US had several deaths from coronavirus before they were able to test for it.

When did patient zero begin in US? How many people are infected? What are the names of the hospitals? It might be US army who brought the epidemic to Wuhan. Be transparent! Make public your data! US owe us an explanation!” Zhao wrote.

The Chinese spokesman is not the only high-ranking official to raise questions about how the virus sparked a global epidemic. Former Malaysian PM Matthias Chang offered similar speculation back in January, describing the outbreak as the start of a biological war waged by the US against Beijing.

‘Where was your patient zero?’ Chinese official speculates AMERICANS may have infected Wuhan at army games & calls to ‘come clean’

Chinese foreign ministry spokesperson Lijian Zhao has demanded US authorities reveal what they’re hiding about the origins of Covid-19, going as far as to suggest the coronavirus may have been brought to China by the US military.

Pointing to a video of Centers for Disease Control and Prevention (CDC) director Robert Redfield apparently admitting the US had several deaths from Covid-19 before they were able to test for it, Zhao called on the American watchdog to come clean in a tweet posted on Thursday.

“It might be US army who brought the epidemic to Wuhan,” Zhao suggested, calling for the CDC – and the US in general – to “be transparent” and share what they know about where and when “Patient Zero” was first diagnosed.

In the video, Redfield acknowledged that some cases of coronavirus were misclassified as influenza as the medics did not have an accurate test for the new epidemic at the time. He did not elaborate on when these misdiagnosed cases first appeared – saying only that “some cases have been diagnosed that way.”

In the absence of any patients’ details or chronology of deaths, speculation has swirled. Zhao’s “theory” in particular focused on the military delegation that traveled to Wuhan in October for the Military World Games, weeks before the city confirmed the outbreak in December. The delegation was part of the 300-member group of American athletes taking part in the multi-sport event held every four years.

Zhao is not the only high-profile political figure to voice suspicions about the timing of the Games and the introduction of the coronavirus in Wuhan. Former Malaysian PM Matthias Chang offered similar speculation back in January, zeroing in on the event as the launch point for what he deemed a biological war waged by the US against China.

Meanwhile, Chinese billionaire Jack Ma has announced his donation of  1 million face masks and 500,000 coronavirus test kits to the US on Friday.

This is a stark contrast to the earlier US’ response to China’s “sinking into coronavirus-flavored hell” months ago.

The US Commerce Secretary Wilbur Ross all but danced on Beijing’s grave, predicting that the virus would “help accelerate the return of jobs to North America,” and while President Donald Trump himself offered praise of President Xi Jinping’s containment efforts, it was accompanied by little more than closing US airports to flights from China and the equivalent of a “good luck.”

The timing of the Wuhan coronavirus epidemic was worthy of note, considering that the trade war between China and the US has dragged on for more than a year, and the last minute compromise agreement was not definitive enough to assure the market, but only to provide an opportunity for Trump to please his political support base in time for this year’s electoral campaign.

From the Soleimani assassination, to the highly secretive movement of US missiles from Turkey to Poland, to the rise of the COVID-19 pandemic, these events don’t just happened in succession without extensive war room planning towards a desirable conclusion, i.e. to stave off US bankruptcy.

However, the Russia-Saudi “disagreement” on oil production cuts will surely facilitate the eventual downfall of the military-energy cabal based in the West, while the COVID-19 bioweapon attack, is like shooting oneself in the foot, considering the efficiency of the Chinese response, as compared to the desperate lockdowns and lousy CDC reaction to the pandemic in the West, on top of the massive disruption in the supply lines for US industries, which incidentally include the source of Big Pharma’s active raw materials.