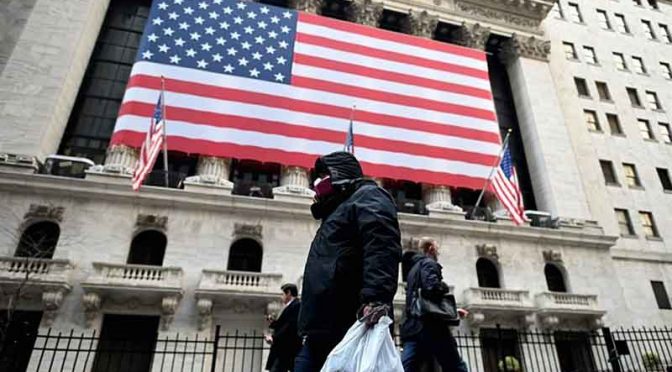 The measure agreed to near-unanimously by both right wings of the one-party state is all about transferring countless trillions of dollars from ordinary Americans to the nation’s privileged class.

Deception defines it by including crumbs for about 150 million US households. Most people are unaware of how Congress and the White House are fleecing them.

The scheme is straight from Wall Street’s playbook, discussed in my books titled “How Wall Street Fleeces America” and “Banker Occupation.”

What Goldman Sachs CEO Lloyd Blankfein once claimed was doing “God’s work” is all about making money the old-fashioned way by stealing it.

GS and other Wall Street banks do it by fraud, grand theft, market manipulation, front-running, pump and dump schemes, scamming investors, bribing politicians, serving in senior government posts, and getting trillions of dollars in bailouts on request.

According to Section 4018/Division A of the corporate bailout bill, “a new special inspector general…within the” Treasury Department is established to oversea distribution of half a trillion dollars in corporate bailout funds.

In his Friday signing statement, Trump claimed the measure “includes several provisions that raise constitutional concerns” — regarding executive branch authority and the separation of powers.

The bill mandates congressional oversight over distribution of funds, the newly created inspector general required to report to Congress on how this is administered.

Trump wants control of the slush fund to hand disbursements to regime favorites with no oversight.

He cited the Constitution’s Article II, Section 3, stating that the president “shall take Care that the Laws be faithfully executed” — the so-called Take Care Clause.

According to the Constitution Center, it’s “a major source of presidential power because it seemingly invests the office with broad enforcement authority.”

“Yet, at the same time, the provision also serves as a major limitation on that power because it underscores that the executive is under a duty to faithfully execute the laws of Congress and not disregard them.”

Three US presidents, including Trump, were in part impeached for allegedly violating the Take Care Clause.

The same holds for most or all of their predecessors and vast majority of current and former congressional members.

“It is my duty to see the laws executed. To permit them to be trampled upon with impunity would be repugnant to” that duty.

Yet US presidents time and again breach international, constitutional, and US statute laws, accountability never forthcoming.

While presidents are required to observe and enforce the laws of the land, Thomas Jefferson refused to enforce the Sedition Act he called unconstitutional.

In his Friday signing statement, Trump effectively said he’ll decide whether or not to submit to Congress reports by the special inspector general.

This action will undermine transparency in disbursement of funds required under Section 4018 of the corporate bailout bill — including by establishment of a congressional oversight panel charged with reviewing inspector general reports.

“These provisions are impermissible forms of congressional aggrandizement with respect to the execution of the laws,” his statement said — clearly written for, not by, him.

Together with trillions of dollars of  Fed created free money for business favorites, the corporate bailout bill is all about transferring unprecedented amounts of wealth from the public to America’s privileged class.

A manufactured crisis is being used to commit the grandest of grand theft, along with further eroding human and civil rights.

Things perhaps are heading toward eliminating them altogether on the phony pretext of protecting national security.

Award-winning author Stephen Lendman lives in Chicago. He can be reached at lendmanstephen@sbcglobal.net. He is a Research Associate of the Centre for Research on Globalization (CRG). His new book as editor and contributor is titled “Flashpoint in Ukraine: US Drive for Hegemony Risks WW III.”