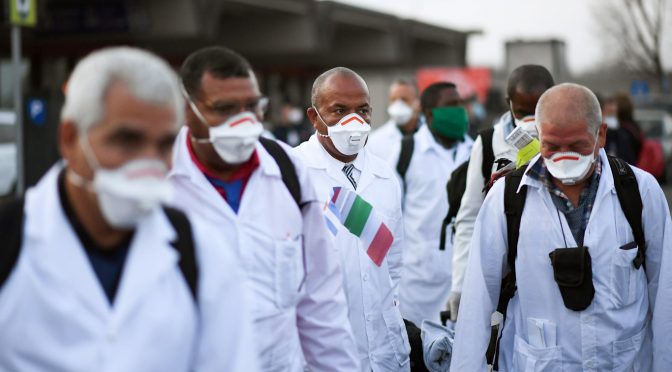 Anti-Cuba zealots in the Trump administration have been enticing Cuban doctors working overseas to defect, paying journalists to write negative stories, slapping sanctions on Cubans in charge of the program, and strong-arming countries to expel Cuban doctors.

While Bernie Sanders paid a political price for uttering something positive about Cuba’s literacy program, the current pandemic has shown the whole world the heroic side of Cuba’s health care system.

I saw this heroism firsthand when I worked with Cuban doctors in poor, remote villages in Africa. It was the 1970s and I was a young woman employed as a nutritionist with the UN Food and Agriculture Organization. My colleagues were good people who were helping to feed hungry children. They also made hefty salaries and lived a wealthy lifestyle they could never afford back home. The Cubans were different. They lived simply, worked under the harshest conditions and earned almost nothing for their services. Their motivation was purely to help people in need.

They called it internationalism and said it was their revolutionary duty to repay their debt to society. They quoted Che Guevara: “The life of a single human being is worth a million times more than all the property of the richest man on earth.”

I was inspired, and ended up moving to Cuba. Four years, a marriage and a baby later, I was accused by the Cuban government of writing articles critical of the revolution and deported. Certainly, I saw and experienced aspects of the Cuban system I disliked, but I never lost my admiration for the country’s public health system and its commitment to international solidarity.

It is truly inspiring that this small, poor island has basic health indicators equal, or better, to those of the world’s richest countries. This is even more remarkable after it has faced a brutal US blockade and sanctions for sixty years. Cuba’s infant mortality rate of 4 per 1,000 live births is lower than in the United States — and that’s according to the CIA! There’s little food on the store shelves and shortages in the pharmacies, but, as Cubans say, “We live like poor people, but we die like rich people.” That’s because their life expectancy of 79 years is the same as in the United States, despite the fact that Cuba spends less than about $800 per person per year on healthcare compared with $11,000 in the United States.

Like most of the world, Cuba is now grappling with coronavirus. As of April 20, there were 1,137 confirmed cases, with 38 deaths. But Cuba’s free and universal health care system, including a robust cadre of health professionals, puts the island in a better position to deal with this crisis than most countries. With its intense focus on training health professionals, Cuba has the highest density of physicians in the world. Its ratio of medical professionals to patientsis roughly three times higher than in the United States.

Cuba not only trains its own doctors, it trains doctors from all over the world. The island of only 11 million people is home to the world’s largest international medical school, the Latin American School of Medicine (ELAM). Since its founding in 1999, the school has trained over 35,000 young people from 138 countries, including the United States. And here’s the kicker: it’s free.

Pastors for Peace, the group that selects US students coming from the “humblest and neediest” communities, says the scholarships include full tuition, dormitory housing, three meals per day, textbooks, school uniforms, and a small monthly stipend. While graduates from U.S. medical schools leave saddled with six figure debts, the only debt ELAM students have is a commitment to practice medicine in low-income and medically under-served communities. That’s why you’ll find ELAM graduates like Dr. Melissa Barbar on the frontlines in the Bronx fighting coronavirus today.

If that doesn’t make you teary-eyed, just look at the brigade of doctors taking off for international missions to the most COVID-19 affected area of Italy, Lombardy. “We are not superheroes,” intensive care specialist Leonardo Fernandez told Reuters as the first brigade left Havana. “We are revolutionary doctors.” As of April 1, Cuba had sent 800 medical personnel to fight COVID-19 in 16 countries, from Angola to Andorra, and more are on their way.

For Cuba, medical assistance has been a hallmark of the revolution: helping Chilean earthquake victims in 1963; Nicaraguans and Hondurans devastated by Hurricane Mitch in 1998; Indonesia tsunami victims in 2004; Haitians after the disastrous 2010 earthquake and subsequent cholera outbreak. Teams were also dispatched to Liberia, Guinea and Sierra Leone to fight Ebola in 2014.

Gradually, this “army of white coats,” as Fidel Castrocalled them, not only responded to emergencies overseas but began serving as family doctors in poor communities around the world. Poorer countries pay only the medical teams’ expenses or seek international support to compensate Cuba; wealthier countries pay more.

But the Trump administration poses a significant challenge to Cuban social programs . When he came to power, his administration launched an all-out attack on the Cuban economy: placing new restrictions on U.S. travel to the island, reducing the amount of remittances Cuban-Americans could send back home, interfering with the transport of Venezuelan oil to the island, and trying to sabotage Cuba’s medical collaborations.

Anti-Cuba zealots in the Trump administration have been enticing Cuban doctors working overseas to defect, paying journalists to write negative stories, slapping sanctions on Cubans in charge of the program, and strong-arming countries to expel Cuban doctors.

The crux of the attack has been to paint the program as a form of modern slavery because the doctors only receive about a quarter of the money the countries pay for their services. But Cuban health professionals volunteer for these assignments — they want the experience, they earn much more than they would back home, and they know the rest of the money goes to support Cuba’s national health care system.

The Trump administration has been successful in convincing the right-wing governments that came to power in Bolivia, Brazil, and Ecuador since 2018 to send about 9,000 Cubans packing. In a tragic twist, these same countries are now overwhelmed with coronavirus and lamenting the loss of experienced professionals.

As we move through this crisis, we see the tragedy of the rich superpower with its privatized, dysfunctional health care system failing its people, while its impoverished neighbor — under constant attack from the superpower — reaches out to help the world. We see Trump desperate to deflect from his catastrophic bungling of this pandemic, including defunding the WHO in what a prestigious medical editor called “an appalling betrayal of global solidarity,” while Cuba’s army of white coats have become the embodiment of global solidarity.

But if you are an American with political ambitions, you might think twice before saying something good about Cuba’s health care system.

Feature photo | An emergency contingent of Cuban doctors and nurses arrive at Italy’s Malpensa airport after traveling from Cuba to help Italy in its fight against the coronavirus. Daniele Mascolo | Reuters

Medea Benjamin is cofounder ofCODEPINK for Peace, and author of several books, including Inside Iran: The Real History and Politics of the Islamic Republic of Iran.

One thought on “Cuba to the Rescue, But Don’t Tell the American People”