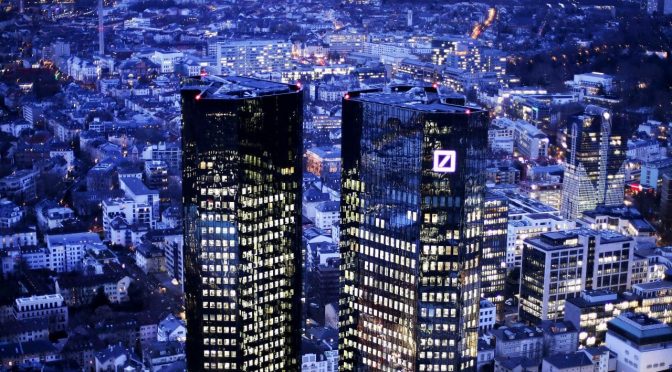 It seems that collapse of the institution would destroy global financial system.

Deutsche Bank, one of Europe’s largest banks, recently asked hundreds of its managers to voluntarily renounce receiving their monthly salaries, complying with the bank’s program to try to reduce losses.

Formally, senior managers voluntarily renounced their respective salaries, giving up their personal earnings to try to save their own jobs. As explained by the bank’s executive director, Christian Zeving, “this decision is part of the cost reduction program”.

Deutsche Bank is in the midst of a difficult austerity program to try to balance accounting after several years of losses. By the end of 2022, the bank plans to reduce the number of full-time jobs by around 18,000 employees, to 74,000 worldwide. Since the 2008 crisis, which shook the foundations of financial system, Deutsche Bank has been going through a constant crisis, having to deal with the great challenge of balancing its finances to survive. However, the situation has started to worsen considerably since 2016, when it added a net loss of almost 7 billion euros (about 7,800 million dollars). In 2018, the International Monetary Fund recognized DB as “the greatest source of risk among systemically important banks in the world”.

In 2019, Deutsche Bank announced a merger with Commerzbank to try to resolve its financial crisis. However, German regulators vetoed the deal, fearing that, instead of saving DB, the merger could destroy Commerzbank, which is the country’s second largest bank. In July of the same year, Christian Zeving announced the restructuring of the financial giant, which is part of the dismissal of thousands of employees worldwide: “I am sorry that, for the restoration of our bank, we have to apply massive reductions,” said the executive director at the time, explaining that “it will serve the bank’s long-term interests” and therefore decisive action is needed. Now, likewise, the Bank harms its employees by trying to “reduce expenses” by failing to pay them instead of firing them.

In early 2020, the bank drew up a plan to cut its expenses by around 2 billion euros to 19.5 billion euros. However, the global pandemic of the new coronavirus has already drastically changed these plans and in the first quarter of the year alone it brought losses of more than 5,600 million euros, which already represents an excessive expenditure of 15% quarterly.

The scenario, however, seems to get worse, with no good news for DB. American officials believe Deutsche Bank was allegedly involved in the financial fraud of Jeffrey Epstein, who was arrested on sex trafficking charges and, according to authorities, committed suicide in federal prison. The bank not only provided him with large loans, but also opened many bank accounts for him under fictitious names. According to The New York Times, the New York financial services department will announce serious sanctions against the German bank before the end of July, which is sure to further damage the bank’s financial condition and contribute to its possible bankruptcy.

Currently, the DB is the main maintainer of European economies, despite its fragility and financial difficulties. DB has many bonuses from Italy, Spain, Portugal and other European countries. The biggest fear of these countries is a situation of economic worsening or bankruptcy, in which the bank will be forced to sell these values at low prices, in order to pay off its debts, which could really break several European economies.

Last year, the Financial Stability Board launched a report with the list of the so-called “too big to fail”, which consists of financial institutions whose size and power are so big that their bankruptcy could represent a systematic global crisis, in domino effect, whose consequences would be unprecedented and would threaten the very survival of the financial system.

The list serves, above all, as a warning to the governments of the countries of such institutions: if the banks are to fail, the State must inject public money to save them and thus avoid a world crisis. However, this list came about in a global pre-pandemic context, which makes this possibility more difficult now.

Many questions remain unanswered. In fact, it is almost undeniable that the fate of Deutsche Bank, without strong state aid, will be the fall and the absolute bankruptcy, which will bring about a compulsory change in the world system, perhaps definitively burying the present “financial age”.

Lucas Leiroz is a research fellow in international law at the Federal University of Rio de Janeiro.