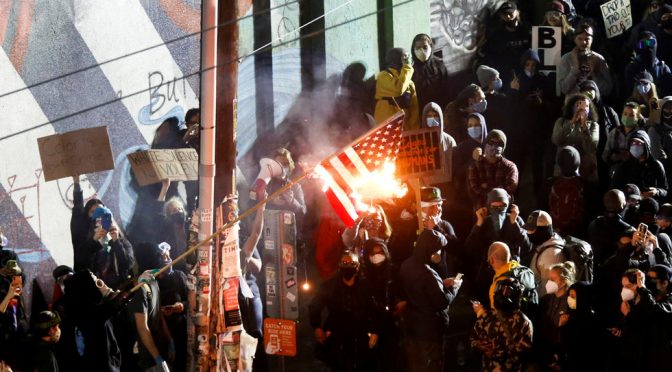 Anti-racism protests in the United States have rapidly evolved into a promotion of the ideas championed by the Democratic Party. It was no longer a question of fighting for equality in law for all or challenging the prejudices of certain police officers, but of reopening a cultural conflict at the risk of a new Civil War.

Protests across the West against racism in the United States are masking the evolution of the conflict there. It has evolved from a questioning of the remnants of black slavery to a conflict that could challenge the integrity of the country.

Last week I pointed out that the United States should have disbanded after the break-up of the Soviet Union to which it was attached. However, the imperialist project (the “Endless War”) led by George W. Bush had made it possible to revive the country after the attacks of September 11, 2001. I also pointed out that in recent decades, the population had moved around a great deal in order to regroup by cultural affinity [1]. Inter-racial marriages were again becoming rare. I concluded that the integrity of the country would be threatened when non-black minorities entered the challenge [2].

This is precisely what we are witnessing today. The conflict is no longer between blacks and whites, since whites have become the majority in some anti-racist demonstrations, Hispanics and Asians have joined the processions, and the Democratic Party is now involved.

Since Bill Clinton’s term in office, the Democratic Party has identified with the process of financial globalization; a position that the Republican Party belatedly supported, without ever fully adopting it. Donald Trump represents a third path: that of the “American dream”, i.e. entrepreneurship as opposed to finance. He got elected by declaring America First! which did not refer to the pro-Nazi isolationist movement of the 1930s as claimed, but to the relocation of jobs as later verified. He was certainly supported by the Republican Party, but remains a “Jacksonian” and not a “conservative” at all.

the first English Civil War, known as the “Great Rebellion” (which pitted Lord Cromwell against Charles I 1642-1651);

What we are witnessing today could lead to the fourth. This seems to be the view of former Secretary of Defense General Jim Mattis, who recently told The Atlantic that he was concerned about President Trump’s divisive rather than unifying policies.

Let us go back to the history of the United States to see where the sides are. Populist President Andrew Jackson (1829-1837) vetoed the Federal Reserve Bank (Fed) established by Alexander Hamilton, one of the fathers of the Constitution, who favoured federalism because he was violently opposed to democracy. Just as Jackson’s disciple, Donald Trump, is today in opposition to the Fed.

Twenty years after Jackson, came the “Civil War” to which today’s protesters all refer. According to them, it pitted a slave South against a humanist North. The movement that began with a racist news item (the lynching of black George Floyd by a white policeman from Minneapolis) continues today with the destruction of statues of southern generals, including Robert Lee. Actions of this type had already taken place in 2017 [4], but this time they are gaining momentum and governors from the Democratic Party are participating.

The Civil War pitted a rich, Catholic, agricultural South against a Protestant, industrial North aspiring to make a fortune. It crystallized around the issue of customs duties which the South believed should be set by the federal states, but which the North intended to abolish between the federal states and have the federal government determine.

Therefore, in debunking the Southern symbols, the current demonstrators are not attacking the remnants of slavery, but denouncing the Southern vision of the Union. It was particularly unfair to attack General Lee, who had put an end to the Civil War by refusing to pursue it with guerrilla warfare from the mountains and by choosing national unity. In any case, these degradations effectively pave the way for a fourth Anglo-Saxon civil war.

Today the notions of South and North no longer correspond to geographical realities: it would rather be Dallas against New York and Los Angeles.

In referring to Richard Nixon’s 1968 election slogan, “Law and Order,” President Donald Trump is not trying to preach racist hatred as many commentators claim, but is returning to the thinking of the author of that slogan, Kevin Philipps (quoted above). He still intends to make Andrew Jackson’s thought triumph over Finance by relying on Southern culture and not to cause the disintegration of his country.

President Donald Trump finds himself in the situation Mikhail Gorbachev experienced at the end of the 1980s: his country’s economy – not finance – has been in sharp decline for decades, but his fellow citizens refuse to acknowledge the consequences [5]. The United States can only survive by setting new goals. Such change is particularly difficult in times of recession.

Paradoxically, Donald Trump is clinging to the “American dream” (i.e., the possibility of making a fortune) when US society is stuck, the middle classes are disappearing, and new immigrants are no longer European. At the same time only its opponents (the Fed, Wall Street and Silicon Valley) are proposing a new model, but at the expense of the masses.

The problem of the USSR was different, but the situation was the same. Gorbachev failed and it was dissolved. It would be surprising if the next US president, whoever he may be, succeeded.

Tom Steyer – who unsuccessfully campaigned for the Democratic Party’s presidential nomination for 2020  – and liberal financier George Soros are both named as financial contributors in the new clip on Refuse Fascism, an organization dedicated to removing President Donald Trump and Vice President Mike Pence from office.

Andy Zee, national organizer for the group, mentions during the seven-minute video that Steyer “may not want to be directly connected” to the group because he has “political ambitions” that may be hurt by such a relationship, but Zee says the group is in communication with Steyer’s assistant and “main adviser on impeachment.”

Zee also mentions that past employees of Hillary Clinton’s 2016 presidential campaign have also been involved in the group.

Tee Stern, head of the group’s Atlanta chapter, is seen eating dinner with undercover Veritas reporters at another point, and reveals the group received a “grant” from controversial billionaire Soros.

Silicon Valley is also mentioned as a major source of income for the group.

Stern later makes repeated calls for “thousands of people, then millions” to “come into the streets” and act as a disruptive force until the president is made to leave office.

The video is the third part in a series from Veritas meant to expose left-wing organizations like Refuse Fascism and Antifa, groups that are behind or are part of many of the ongoing protests across the US.

Refuse Fascism is a group gaining more and more attention from conservatives. Author and filmmaker Dinesh D’Souza described them as part of a left-wing “paramilitary force” this week.

2 thoughts on “What the US Protests Reveal”