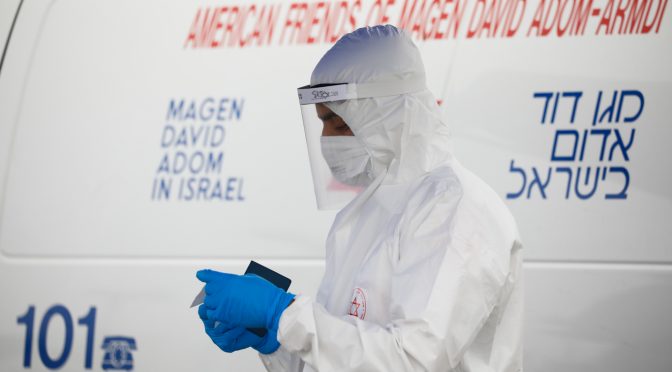 A company formed at the behest of the Israeli Ministry of Defense has begun collecting voice data from Americans to detect COVID-19 symptoms through technology with dubious diagnostic value, but highly profitable applications in law enforcement.

The Israeli Ministry of Defense has launched a project to analyze people’s voices and breathing patterns using artificial intelligence (AI) in order to determine if they have COVID-19. The software allegedly listens for detectable “signs of distress,” ostensibly from the respiratory effects of the virus. A May 27 report in the Jerusalem Post stated that the research was already being conducted at several hospitals in Israel, where confirmed COVID-19 patients were asked to provide voice samples to be compared to those of a control group from the general population.

Results from the research were expected sometime in June. However, the study has now been expanded beyond Israel’s borders. Over one million voice recordings are currently being collected in the United States through a mobile app developed by Massachusetts-based Vocalis Health, under the auspices of the Israeli government.

While growth in the biomarker sector is strong, the applications of voice biomarker technology lean heavily towards surveillance and language parsing, as opposed to diagnostic applications, which are virtually non-existent at the moment. Vocal biometric data has already been making its way into American law enforcement for at least two years.

Thousands of police departments across the United States, for instance, use a voice-recognition technology called “Dragon Law Enforcement” developed by Nuance Communications. This same company has established a strong presence in the healthcare sector as well. In 2018, Nuance partnered with the healthcare software giant, Epic Systems, which is said to hold two-thirds of medical records in the U.S., and its Dragon Medical speech recognition software is used by half a million clinicians throughout the country.

Epic and Nuance Communications are only a few of several companies lurching into the freshly-minted Coronavirus tech marketplace along with at least 150 Israeli startups that began working on ideas relating to COVID-19 back in 2019 – many under the guise of healthcare. But, their value as a medical diagnostic tool looks certain to be outweighed by its broader applications in burgeoning pre-crime law enforcement technologies that are now proliferating across the United States and the world.

Founded just weeks after U.S. intelligence agencies alerted the Israeli government about the threat posed by the novel coronavirus in November 2019, the company was formed from the merger of two Israeli tech companies, Beyond Verbal and Healthymize. Israeli life sciences venture fund Amoon raised the initial $9 million capital for the new company, which focuses on developing artificial intelligence and voice analysis applications for the health sector.

Vocalis Health CEO, Tal Wenderow, said he decided to make a $1.1 billion exit from his medical robotics company, Corindus in 2019 and pursue opportunities in “health, voice, and AI” after realizing “the untapped sense of the human body” presented him with “a very good opportunity.” The “COVID-19 Voice Study” initiated by the Israeli Ministry of Defense and actualized by Vocalis Health will seek 100,000 volunteers to conduct the research which is slated for completion by December 1 with an anticipated product release by the beginning of 2021.

Vocalis Health’s AI-enabled research of the voice recordings in order to “triage, screen and monitor COVID-19 virus” will utilize a platform developed by NeuroLex Laboratories, Inc, called the Voiceome Study – the “world’s largest clinical study to collect voice information labeled with health traits” according to their Indiegogo campaign. Eventually, Vocalis intends to use “this technology as a population health screening tool that could be applied to vast quantities of data collected from call centers or devices”.

NeuroLex founder and CEO, Jim Schwoebel claims voice biomarker technology is analogous to genetic code and can “use machine learning models on speech features to infer health conditions.” While voice biomarkers have been used to aid in the diagnosis of neurological disorders, such as Alzheimer’s, Parkinson’s, and others, which may manifest in voice patterns, the scientific validity of these being of any use in diagnosing specific viral infections is still an open question. Along with finger tapping speed, sleep movements and walking, it is one of the forms of digital biomarkers under investigation in this nascent area of scientific inquiry and, as NeuroLex’s Chief Medical Officer, Dr. Hosseini Ghomi noted in 2019, “the field of digital biomarkers is still very fragmented because there are no standards for voice recording or an organizing force.”

The platform that Vocalis Health used to bootstrap its app, Voiceome, also received funding from a venture capital firm with strong ties to Israel and the IDF through one of its partners, David Gussarsky, a former head of software development teams for the Israel Defense Forces and former IDF special ops commander, Tal Morgenstern. The ubiquitous presence of Israeli defense interests versus health in this endeavor raises questions about the ultimate goal behind it.

Multiple difficulties are posed by the very literature and disclosures published on the COVID-19 Voice Study’s own site. Among the most salient red flags is the consent form offered volunteers, which makes no mention of COVID-19 as one of the “medical and behavioral health conditions” they seek to identify. It does, however, name the neurological conditions NeuroLex designed its algorithms to detect. But, even these are completely undermined by Jim Schwoebel, himself, in the “Risk and Challenges” portion of the Indiegogo campaign where he reminds us of that if the proposed project doesn’t work, Voiceome “can still provide […] relevant reports” on machine learning models for medical questionnaires like PHQ-9, a depression scoring model and UPDRS, a rating scale for Parkinson’s disease.

The “product,” which will eventually result from the study in January of 2021 according to their development timeline, is supposed to “alert about early symptoms and monitoring at home by only using a smart phone,” notifying authorities who can then implement the requisite measures based on unproven technology.