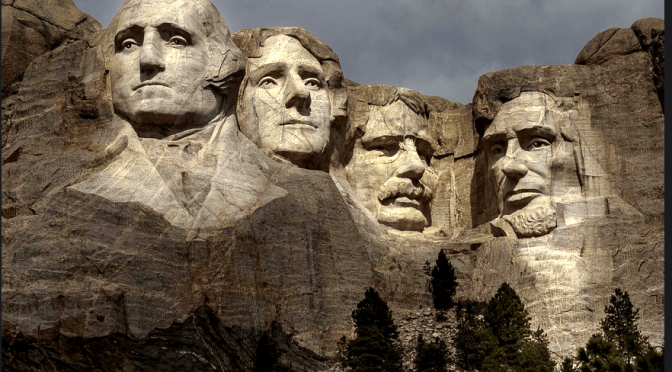 As colonial monuments are being destroyed in the U.S. and Europe, Mount Rushmore so far remains untouched and a news item since U.S. President Donald Trump visited the site on July 4 to commemorate Independence Day. Fireworks and fighter jets dominated a territorial space that is laden with the memory of colonial violence against the indigenous American Indians.

A treaty signed in 1868 between the U.S. government and the Sioux people recognised the Black Hills in South Dakota as exclusive to the indigenous. The agreement was toppled in 1874 when gold was discovered in the Black Hills in a mining expedition led by General George A. Custer. As mining exploitation commenced, the intruders requested army protection against the Sioux people who were making use of their terrain according to their rights, leading to the confiscation of indigenous territory by the U.S. government in 1877.

Fifty years later, the Black Hills were permanently desecrated to create a monument glorifying white supremacy. According to Trump’s speech, “Mount Rushmore will stand forever as an eternal tribute to our forefathers and to our freedom.”

The faces of former presidents Abraham Lincoln, George Washington, Thomas Jefferson and Theodore Roosevelt were carved in indigenous territory by the sculptor Gutzon Borglum, who had ties to the Ku Klux Klan. On stolen land, the ugly combination of racism, slavery and massacres created a monument that eliminated all recognition of indigenous historical memory and presence.

As U.S. activists continue their purging of public spaces across the country, Mount Rushmore elicited greater attention. However, in the late 1960s and 1970s Native Americans mobilised for reclamation of their territory. Any current debate and action regarding the future of the site must start with the indigenous – anything less will be tantamount to another cycle of obliterating the Sioux history and in turn, misrepresenting the Native Americans’ demands for recognition.

The UN Declaration on the Rights of the Indigenous Peoples recognises the right to self- determination, lands and resources. In 2012, the UN recommended that the U.S. should return indigenous lands to the Native Americans, including the black Hills. However, the UN has taken a lenient approach towards eradicating colonialism due to its legitimising the presence of colonial states. At the UN, decision-making is a colonial endeavour and any suggestions of reparations to the indigenous are always non-binding recommendations, in order to contradict the right to indigenous self-determination and to prevent decolonisation from happening.

A thorough reckoning of colonialism requires recognition of all the violations committed against black people and Native Americans. There exists common ground as regards exploitation; territory, however, is an important component that must not be overlooked. For the Sioux people, the Black Hills are a sacred site and it is the return of their lands that they demand, not financial compensation for stolen territory. In 1980 the U.S. Court of Claims ruled that the 1877 confiscation of indigenous land from the Sioux was illegal and declared compensation to the paid, which the Sioux people refused on principle.

Financial compensation is no substitute for decolonisation. Neither would it suffice for the mass execution of Native Americans after the U.S.-Dakota War in 1862 by President Lincoln, under whose rule, the military ordered 303 men sentenced to death after brief travesties of trials, some lasting a mere five minutes. On December 26, 1862, 38 men from the Dakota indigenous community were hanged in public.

Mount Rushmore stands as a reminder of how U.S. colonial and racist politics exploited indigenous territory to carve reminders of slavery and massacres. This conflation by the colonisers requires careful thought. The toppling of monuments has ignited a rethinking of colonial history, yet the Black Hills appropriation has been doubly desecrated by the exploitation of indigenous land to glorify all forms of oppression.

While presently it is unlikely that the carved abominations will be destroyed, and the decision should rest with the Sioux people, it is important to consider the Black Hills as a site of memory, where colonialism created a monument to itself at the expense of the indigenous Native Americans and slavery. For a rethinking of history, a reversal of memory annihilation is necessary.

Ramona Wadi is an independent researcher, freelance journalist, book reviewer and blogger. Her writing covers a range of themes in relation to Palestine, Chile and Latin America.