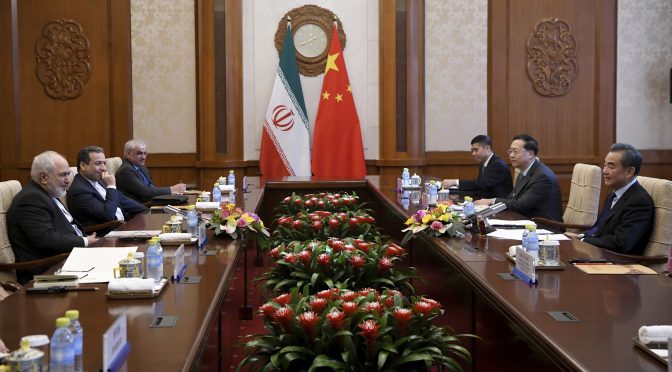 In contrast to endless US war on humanity, China, Russia, Iran, and other nonbelligerent nations on its target list for regime change pursue cooperative relations with other countries — hostility toward none.

For some time, China and Iran have been working on a reported 25-year strategic partnership.

When finalized, it’ll build on a 2016 bilateral agreement between both countries.

Contrary to some reports, there’s nothing secret about talks between officials of both nations. They’ve been known about for some time.

When finalized ahead, it’ll reportedly be called the Sino-Iranian Comprehensive Strategic Partnership.

“According to a 2016 agreement between the presidents of the Islamic Republic of Iran and the People’s Republic of China, stipulated in Article VI of the communique during the honorable Chinese president’s visit to Tehran, the two countries have explicitly expressed their political determination to promote and deepen the relations strategically and decided to devise a comprehensive 25-year roadmap between the two countries to become the basis for the coherent and all-out expansion of the political and economic relations between Iran and China in the years to come,” adding:

“The preliminary draft of the document has been prepared with the participation of specialized institutions from the two countries and is currently undergoing the negotiation stage.”

“Naturally, after finalization of the negotiations, the document will be submitted to the representatives of people in the Parliament for legal procedures.”

Referring to US hostility toward both countries, Mousavi added that

“the strategic relations between Iran and China that entails mutual key interests for the people of the two countries have enemies (that) will make every effort for the failure of these negotiations and lack of success of the document.”

“Fulfillment of Iran’s national interests has been the only guiding principle for the Ministry of Foreign Affairs in devising the strategic document, and the negotiations have been held with utmost carefulness and meticulousness, and the people of Iran will soon observe its results, God willing.”

“(N)o other text would be valid before the finalization of negotiations. Therefore, the media are urged to refrain from republishing the texts that are prepared and disseminated with various purposes and objectives.”

Mousavi expects that details of the strategic partnership will be finalized and made public in the near future.

Separately, Iranian Foreign Minister Mohammad Javad Zarif said “(w)ith confidence and conviction, we are negotiating a 25-year strategic accord with China,” stressing there’s nothing secretive about it.

The leadership of both countries support it. Bilateral ties have been close for years.

Days earlier, Iranian President Hassan Rouhani’s chief of staff Mahmoud Vaezi slammed what he called “destructive … propaganda … initiated and directed from outside Iran against the expansion of (its) relations with neighbors … especially (with) China and Russia.”

Clearly, US hardliners from both right wings of its war party oppose constructive relations that benefit nations they want transformed into subservient vassal states.

The Sino/Iran accord will advance the economic and strategic interests of both countries at the expense of US imperial aims to weaken and undermine their development.

According to Oil Price.com last week, citing unnamed “senior sources closely connected to Iran’s Petroleum Ministry,” the economic accord will have a military component, adding:

“China will invest US$280 billion in developing Iran’s oil, gas, and petrochemicals sectors” during the first five years of the 25-year agreement, “provided both countries agree” on terms.

“There will be another US$120 billion of investment” by China, $400 billion in total.

In return, “Chinese companies will be given the first option to bid on any new – or stalled or uncompleted – oil, gas, and petrochemicals projects in Iran.”

“China will also be able to buy any and all oil, gas, and petchems products at a minimum guaranteed discount of 12 per cent to the six-month rolling mean average price of comparable benchmark products, plus another 6 to 8 per cent of that metric for risk-adjusted compensation.”

China will be involved in “build(ing) out of Iran’s core infrastructure” as part of its “One Belt, One Road” initiative.

It’s a longterm project for greater regional integration, numerous countries involved in over $1 trillion in investment.

America pursues dominance, stressing militarism over cooperative relations with other nations, a prescription for confrontation over peace and stability.

Rouhani government spokesman Ali Rabiee said Iran is “ready (to negotiate) similar accords with (other) countr(ies) based on mutual trust.”

According to Oil Price.com, China seeks another discount, “32%” in total.

Its assessment is pure speculation as bilateral discussions continue.

Terms of what’s agreed on won’t be known until officials of both countries release them publicly.

“Some of the criticisms recently raised about a 25-year strategic cooperation deal between Tehran and Beijing are ridiculous,” adding:

“They are terrified that Iran would be linked to China’s global potentialities.”

“Since Iran’s relations with China are serious, and that forms the basis of economic and strategic cooperation between the two states in the 25-year document, it is quite normal for western countries to be worried about such relations.”

“The policy of the US and Britain—Anglo-Saxons in general—is to focus on pressuring Iran in a bid to keep it away from China and Russia.”

The policy failed. So did over 40 years of US efforts colonize and exploit Iran, its vast hydrocarbon resources, and 84 million people.

China and Iran are economic and strategic partners.

According to Chinese President Xi Jinping,

“relations between (both countries) resulted in important achievements in the political, economic and cultural sectors,” adding:

Beijing “is ready to start a new chapter in bilateral relations by upgrading the current level of interaction and cooperation.”

Award-winning author Stephen Lendman lives in Chicago. He can be reached at [email protected]. He is a Research Associate of the Centre for Research on Globalization (CRG). His new book as editor and contributor is titled “Flashpoint in Ukraine: US Drive for Hegemony Risks WW III.” http://www.claritypress.com/LendmanIII.html Visit his blog site at sjlendman.blogspot.com.