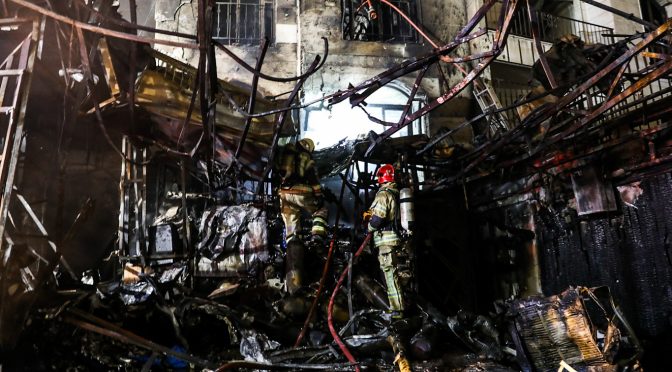 A relentless campaign of aggression against Iran is entering a new phase with cyberattacks on military and civilian targets that aim to cripple Rouhani’s government and set the stage for wider conflict in the Middle East.

Israel is believed to be behind several recent acts of sabotage against Iranian civilian and military infrastructure, including a hospital, that have taken the lives of at least 19 people and has further disrupted an economy already in the throes of a devastating downturn brought on by a global pandemic and crippling economic sanctions.

Leaks emerging out of Israel have identified the apartheid state as the rouge actor wreaking havoc on Iran. Mossad chief, Yossi Cohen, was outed by a political rival as the source of anonymous leaks linking Israel to the conflagration at a Iranian nuclear facility. A different story had made the rounds earlier when an unknown “Iranian dissident group calling itself the Homeland Cheetahs” reportedly contacted the BBC to take credit for the blast and claimed that it was part of an “ongoing campaign of sabotage against Iranian strategic sites.” But, neither the story nor the group’s existence were ever confirmed.

The first in a string of recent fires and explosions took place on June 25 when a “huge” blast took down a power plant in Shiraz, east of Tehran, and caused an extensive blackout in several parts of the nation’s capital. Two more military sites believed to house nuclear and missile production facilities on the eastern edge of Tehran were also attacked over the course of these last few weeks and just two days ago, on July 19, a new explosion rocked a power station in Iran’s Isfahan Province in what is also believed to be the work of Israeli cyberattacks, bringing the total of military and civilian sites targeted to eight.

The most high profile incident occurred on July 2, when the Iranian nuclear site in Natanz was targeted in a cyberattack which caused an explosion at the underground facility, reportedly “set[ting] back the Iranian nuclear program by two months.” The attack was egregious enough to elicit an unusual statement from the Iranian state news agency, blaming Israel and the U.S. directly for the incident.

With these attacks, Israel intends to provoke a belligerent response by Rouhani’s government, while also seeding a narrative of cyber warfare as the next theater of global combat, which perfectly dovetails with Israel’s burgeoning partnership with the U.S. National Security state to build a juggernaut of mass surveillance.

Exhibit A, B and C

The precedent for Israeli cyberattacks on Iran is strong. Perhaps the most salient example is U.S.-Israeli Stuxnet project, a computer virus developed in tandem with the U.S. and an “elite” Unit 8200 team, led by Lior Div – an Israeli software engineer who went on to found a company called Cybereason, which has been running doomsday cyberattack scenarios for the upcoming 2020 U.S. elections.

The project was first authorized by the Bush administration and involved the recreation of Iran’s nuclear centrifuges, according to “experts” at Israel’s Dimona complex. It was carried out a decade ago at the same facility targeted in early July. The comparable “complexity” of the covert operation has led many familiar with the matter to the conclusion that Israel was also behind the latest round of sabotage on Iran’s underground nuclear facility.

Only six years later, a cyberwarfare program code named “Nitro Zeus” was developed in the early days of the Obama administration as a backup “in case the diplomatic effort to limit its nuclear program failed and led to a military conflict.” The operation was intended to take down Iran’s air defenses, power grid, and communications systems, but was “shelved” after the JCPOA (Iran Nuclear Deal) was signed. In tandem with Nitro Zeus, “American intelligence agencies” were busy making separate plans to disable the Fordo nuclear enrichment site through a cyberattack. The project was intended as a follow-up to the program code named “Olympic Games,” which included the Stuxnet virus, as well as the Flame malware, that attacked computers running Windows operating systems.

Given this robust history of cyber warfare against Iran by the U.S. and Israel, consensus has been quick to build around the idea that these same actors have, in fact, been behind all of the recent attacks in Iran. Furthermore, according to NSC member, Eric Brewer, it’s enough that the Iranian leadership believes that it is the case. “Given that these [attacks] are hitting all across Iran at military and civilian locations”, he stated, “that is going to cause Iran’s threat perceptions to spike.”

Barely two days into 2020, the Trump administration assassinated Iranian General Qasem Soleimani and set the stage for a relentless campaign of provocation against the Middle Eastern nation that has persisted until today. The patently illegal hit job on one of Iran’s top military leaders was a textbook application of Israel’s so-called Octopus Doctrine; brainchild of Israeli Defense Minister, formerly Education Minister, Naftali Bennet, who once stated that the world could be living with conflict in the Middle East for 100 years.

The doctrine entails murdering “Iranian advisers and officials who direct and support proxy forces in other countries.” Trump’s willingness to do the bidding of Israel’s policy of aggression should come as no surprise and is the reason Netanyahu and company are trying to take advantage of the most Israel-friendly administration in American political history, putting as much pressure as possible on Iran, which is presently reeling with unemployment rates hovering around 35 percent and a large informal service sector that is languishing under coronavirus-imposed lockdowns. The conditions for catastrophic civil unrest in Iran haven’t been this ripe since the CIA-sponsored overthrow of Mohammad Mosaddegh seventy years ago.

The seeding of a cyber warfare narrative has been coming from virtually every corner of the Israeli state. Tamir Pardo, former head of Mossad, recently claimed that the COVID-19 outbreak would unleash a “global scale crisis on three fronts: medical, social, and financial” and that “cyberwars” would be the method of choice for cash-strapped nations looking for “cheaper solutions” at “state level, between companies, and between criminal organizations.”

As is the case with many former Mossad and IDF personnel, Pardo is currently part of a cybersecurity company called XM Cyber, which offers the very services the cyber warriors he envisions will need to plan out their offensive or defensive operations. “Whoever finds a remedy or vaccine for Covid-19 will become a major target for attackers”, Pardo asserts, predicting the emergence of “cyber conflicts between political and commercial adversaries” in a kind of cybernetic dog-eat-dog future.

A matter of cyber convenience

In May, a purported Iranian cyberattack on six Israeli water treatment plants that was ostensibly foiled by Israeli “cyber” authorities took place. Stories were circulated in the aftermath about how the attack “could have sickened hundreds,” despite the fact that no evidence of an attack of any kind was ever produced. Israeli Defense Minister Naftali Bennet pushed for a “strong” response, which eventually manifested as a cyberattack targeting Iran’s Shahid Rajaee Port terminal in Bandar Abbas on the strategic Strait of Hormuz.

Another supposed cyberattack on Israel’s water system took place on July 17. Israeli officials claim that “two attacks were aimed at agricultural water pumps in the Upper Galilee and infrastructure in the centre of the country,” and while no culprit was named, it is implied that Iran carried out these attacks, as well. Israeli media has been propagating this narrative since the first ostensible cyberattack on the water processing plants, which – like the last one – resulted in no damage deeming it a “significant escalation by Iran and a crossing of a red line.”

The head of Israel’s National Cyber Directorate warned on that occasion that we were just seeing “the beginning” and that a “cyber winter is coming.” Other, more “moderate” Israeli voices, like Amos Yadlin, the head of the Institute for National Security Studies, and a former head of IDF military intelligence, have looked approvingly upon this shift in focus for Israeli policy. “According to foreign sources, it appears that the prime minister focused this week on Iran rather than [his plan for West Bank] annexation,” he tweeted last Friday, adding that this was the very policy the veteran of the Yom Kippur war has been recommending.

“If Israel is accused by official sources”, he continued, “then we need to be operationally prepared for the possibility of an Iranian reaction (through cyber, firing missiles from Syria or a terror attack overseas).”

The drumbeat for war with Iran seems to be intensifying as 2020 reaches its halfway point and the narrative that cyberattacks are to play an inciting role in the coming conflict is being drilled into the collective mind. The U.S. and Israel are committed to exploiting invisible and unverifiable “attacks” on systems, which they themselves have built and sold to the world with backdoors to the very technology they claim are the target of “malicious actors”, who also happen to be in the way of their global interests.

Iran, for its part, is comfortable stating that “the Iranian government does not engage in cyberwarfare”, as Alireza Miryousefi, spokesman for Iran’s mission to the UN, told the Washington Post. We can take his word for it, or trust the claims of Israeli cybersecurity firm ClearSky, which “closely tracks Iranian hacking activity” and has put forward unsubstantiated accounts of Iranian hacking of U.S. pharmaceutical company, Gilead Sciences Inc. The choice may be one between war and peace.

Feature photo | The scene of a mysterious explosion at the Sina At’har health centre in the north of Iran’s capital Tehran. Photo | Amir Kholousi ISNA