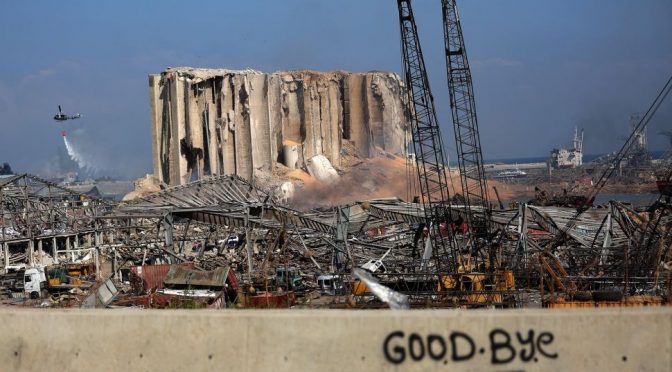 Here’s a confirmation that Israel did indeed bomb Beirut yesterday. But reading between the lines, it is very evident that the purpose of this article is to divert our attention to the same mainstream narrative that it was not a tactical nuclear bomb.

A confidential highly-informed Israeli source has told me that Israel caused the massive explosion at the Beirut port earlier today which killed over 100 and injured thousands.  The bombing also virtually leveled the port itself and caused massive damage throughout the city.

Israel targeted a Hezbollah weapons depot at the port and planned to destroy it with an explosive device.  Tragically, Israeli intelligence did not perform due diligence on their target.  Thus they did not know (or if they did know, they didn’t care) that there were 2,700 tons of ammonium nitrate stored in a next door warehouse.  The explosion at the arms depot ignited the next door warehouse, causing the catastrophe that resulted.

It is, of course, unconscionable that Israeli agents did not determine everything about their target including what was in its immediate vicinity. The tragedy Israel has wreaked is a war crime of immense magnitude.

The ICC has already been investigating Israel for war crimes in Gaza since the 2014 Operation Protective Edge.  Now, I imagine it will expand the scope to incorporate today’s criminally negligent massacre.

Though Israel has regularly attacked Hezbollah and Iranian weapons depots and convoys in Syria, it rarely undertakes such brazen attacks inside Lebanon.  This attack in the country’s capital marks an even greater escalation. The sheer recklessness of this operation is astonishing.

Not surprising though. An operation of this sort can only happen amidst internal political dysfunction. Bibi is on the ropes and desperate to change the subject.  When his intelligence officers brought the plan to him he probably rubbed his hands with glee and said: “Go to it!” Israeli intelligence was naturally out to please the boss and probably cut corners in order to make the attack happen. When no one is at the wheel saying “Stop!” the boat hits an iceberg and sinks.  That’s possibly what happened here.

The Israeli bombing brings to mind similar bombings orchestrated by its agents in Beirut in the period before and after its 1982 invasion. Ronen Bergman’s book on Mossad assassinations and Remy Brulin have documented multiple Israeli bombings during this period which wreaked widespread death and destruction on the city’s civilian population.

In this case, the damage done was accidental.  But that will be little comfort to the thousands of Beirutis whose lives have become a living hell as a result of this Israeli crime.

As an aside, former Likud MK Moshe Feiglin tweeted a quotation from the Bible about the disaster:

“There never have been such great days in Israel as the 15th of Av [the day of the bombing] and Yom Kippur.”

Of course, it pains me to admit that Pres. Trump was correct in his earlier statement that the explosion was a “terrible attack,” and that the information was conveyed to him by “his generals.” In this case, he and they were right.

There could (and should) be domestic political repercussions for this disaster. As Netanyahu approved the attack, he is responsible for the consequences. In 1982, a commission of inquiry found Ariel Sharon culpable for the invasion of Lebanon and the massacre at Sabra and Shatilla.  He was sent into political exile for a decade. At the very least, this should disqualify Bibi from leading the country. This would be the outcome in any democratic nation in which the leader was held accountable for his failures.

But alas, Israel is not such a nation, and Bibi always seems to weasel out of responsibility for his blunders. The difference here is that the Israeli leader is already under pressure due to his government’s disastrous response to Covid19 and the looming corruption trial on three counts of bribery.  This could be the tipping point.

Normally, Israelis would not bat an eye at such a massacre. They have become inured to the suffering they inflict on their Arab neighbors.  But given Netanyahu’s collapsing popularity, this could hasten his end.

Israel couldn’t have picked a worse time to inflict such suffering on Lebanon.  The country is in deep economic crisis. Businesses are going bankrupt, people have nothing to eat, politicians quarrel and blame while doing nothing. Lebanon is a basket case. Suffering is everywhere.  There is little appetite from its Arab brethren like Saudi Arabia to come to its aid. If any country did not need this added tragedy it is Lebanon.  But there  you go–Israel doesn’t seem to have any sense of shame or restraint when it comes to inflicting pain on its neighbors.

Of course there will be doubters. Those who disbelieve my source. But to them I point out two pieces of circumstantial evidence which are telling. Normally, if Israel has undertaken a successful terror attack (such as those against Iran) it will either refuse to comment or a senior military or political figure will saying something like: While we refuse to comment, whoever did it  did the world a favor.

In this case, Israel immediately denied responsibility. Even Hezbollah supposedly said Israel hadn’t caused the damage (likely protecting itself from the inevitable blame that will fall upon it for storing its weapons next to a building filled with explosive material).

The second tell-tale sign is that Israel never offers humanitarian aid to its Arab neighbors.  During the Syrian Civil War the only group to whom Israel offered humanitarian assistance was its Islamist anti-Assad allies. Israel has never offered such aid to Lebanon, until today.  Instead, it has rained down death and destruction for decades.  For it to do so now is the height of chutzpah.

Plausible deniability is the main purpose as to why any admission to an operation is done only through informants, or anonymous sources, but the message is very clear between counterparts of both sides of any conflict.

The first explosion was just a cover for the second and main nuclear attack. That’s how they covered up the Tianjin China attack with a surgical targeting of a chemical depot at first, then followed up by a nuclear drop, which resulted to a massive explosion that rocked and shattered the windows of the buildings nearby, sending container vans up in the air, and left thousands of newly assembled cars burned to the ground just like in 911 attack.

The experience on the ground, of course, is that of initial panic, which should decapitate even a keen observer from anticipating what’s going to happen next, or where the nuclear head will come from.

The same pattern also preceded the Fukushima Tsunami 2011, which subjected the city to a 7.1, not 9, magnitude earthquake before the main nuclear detonation on the sea bed 4 kilometers away from the shoreline occurred. This was followed up by another detonation right inside the nuclear plant days after, which finally paved the way for the payment of 60 Trillion Yen to the Federal Reserve.

In the recent case with Lebanon, it is meant to fully bring down their already devastated economy to the same level as that of the occupied Palestinian lands, purposely to induce a civil unrest that will further alienate the Hezbollah faction from the government and the population, which incidentally is another objective of the informant quoted in the above article.

Once the “terrorists” are gone, Israel will have full control of the 122 trillion cu.ft. of recoverable natural gas deposit at the Levantine Basin.

The Greater Israel gameplan is still very much at play in the Middle East because most of the people in DC are Israeli conscripts, who have voted on several occasions to impose sanctions on Lebanon, which led to the 80% loss of value of its currency over the years.

Until today, we are not aware that Lebanon is engaged in agriculture that warrants the storage of 2,750 tons of ammonium nitrate fertilizer, when the fact remains that the country is still importing most of its basic needs from elsewhere.

Finally, our featured photo shows the remains of the Lebanon grain silos, 80% of which have gone up in smoke from yesterday’s bombing, and the spray painted “Goodbye” message in the foreground.

Yes, there are no dancing Israelis this time around, but who knows… when nobody’s looking.