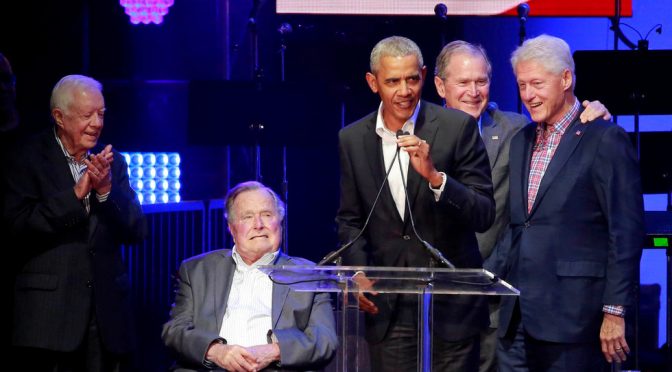 Don’t bother, they’re here, already performing in the center ring under the big top owned and operated by The Umbrella People.

Trump, Biden, Pence, Harris, and their clownish sidekicks, Pompeo, Michelle Obama, et al., are performing daily under the umbrella’s shadowy protection. For The Umbrella People run a three-ring circus, and although their clowns pop out of separate tiny cars and, acting like enemies, squirt each other with water hoses to the audience’s delight, raucous laughter, and serious attentiveness, they are all part of the same show, working for the same bosses.

Sadly, many people think this circus is the real world and that the clowns are not allied pimps serving the interests of their masters, but are real enemies.

The Umbrella People are the moguls who own the showtime studios – some call them the secret government, the deep-state, or the power elite. They run a protection racket, so I like to use a term that emphasizes their method of making sure the sunlight of truth never gets to those huddled under their umbrella. They produce and direct the daily circus that is the American Spectacle, the movie that is meant to entertain and distract the audience from the side show that continues outside the big top, the place where millions of vulnerable people are abused and killed.

And although the sideshow is the real main event, few pay attention since their eyes are fixed on the center ring were the spotlight directs their focus.

The French writer Guy Debord called this The Society of the Spectacle.

For many months now, all eyes have been directed to the Covid-19 propaganda show with Fauci and Gates, and their mainstream corporate media mouthpieces, striking thunderbolts in the storm to scare the unknowing audience into submission so the transformation of the Great Global Reset, led by the World Economic Forum, Wall Street, the International Monetary Fund, et al can proceed smoothly.

Now hearts are aflutter with excitement to see the war-loving Joe Biden boldly coming forth like Lazarus from the grave to announce his choice of a masked vice-presidential running mate who will echo his pronouncements.

And the star of the big top, the softly coiffured reality television emcee Trump, around whom the spectacle swirls, elicits outraged responses as he plays the part of the comical bad guy.

All the while the corporate mainstream media warn of grim viral milestones, election warnings, storms ahead!  The world as you know it is coming to an end, they remind us daily.

The latter meme contains a hint of truth since not just the world as we know it may be coming to an end, but the world itself, including human life, as the clowns initiate a nuclear holocaust while everyone is being entertained.

Meanwhile, as the circus rolls along, far away and out of mind, shit happens:

With more than 400 military bases equipped with nuclear weapons surrounding China, the United States military continues its encirclement of China and China enters a “state of siege.”

The U.S. conducts military exercises with the Ronald Reagan Carrier Strike Group in the contested South China Sea. These U.S “maritime Air defense operation[s]” close to the Chinese mainland are a part of significantly increased U.S. military exercises in the area.

The U.S. Defense Secretary Esper announces that the U.S. is withdrawing troops from Germany but moving them closer to the Russian border to serve as a more effective deterrent against Russia.

Russia says it will regard any ballistic missile aimed at its territory as a nuclear attack and will respond in kind with nuclear weapons.

Although the U.S. is formally not at war with any African country, a new report reveals that the United States has special forces operating in 22 African countries with 29 bases and 6,000 troops, with a huge drone hub in Niger that cost 100 + million to build and is expected to have operating costs of more than $280 billion by 2024.

The U.S. continues its assault on Syria, aside from direct military operations, by building up Kurdish proxies in northeastern Syria to protect the oil fields that they are stealing from the Syrian government, a plan hatched long ago.  The U.S. says their strategy is to deny ISIS a valuable revenue stream.  The same ISIS they used to attack the Syrian government in a war of aggression.

A new document exposes the U.S. plan to overthrow the socialist government of Nicaragua through the United States Agency for International Development (USAID), a traditional U.S. regime change and CIA front organization.

Meanwhile, in Belarus, a place most Americans can’t find on a map, there is another color “revolution” underway.

Continuing its war against Iran and Venezuela by other means, the Trump administration seizes Iranian tankers carrying fuel to Venezuela.

And of course the Palestinians are left to suffer and die as Israel is supported in its despotic policies in the Middle East.

The list goes on and on as the U.S. under Trump continues to wage war by multiple means around the world. But his followers see him as peaceful president because these wars are waged through sanctions, special operations, drones, third parties, etc.

But back in the center ring, the two presidential clown candidates keep the audience entertained, as they shoot water at each other. Trump, who now presides over all the events just listed, and Biden, who enthusiastically supported the American wars against Iraq, Afghanistan, Syria, Libya, etc.

But then the followers of Obama/Biden also see their champions as peaceful leaders.  This is even more absurd.

Besides being a rabid advocate for the invasion of Iraq in 2003 as a senator, Biden, as Vice-President under Obama for eight years, seconded and promoted all of Obama’s wars that were wrapped in “humanitarian” propaganda to evade international law and keep his liberal supporters quiet.

From Bush II, an outright cowboy war-wager who used America’s large military forces to invade Afghanistan and Iraq under false pretensions – i.e. lies, Obama and his sidekick Biden learned to arm and finance thousands of Islamic jihadists, run by the CIA and U.S. special forces, to do the job in more circumspect ways. They expanded and grew The United States Africa Command (U.S. AFRICOM) throughout Africa. They agreed to a $1 trillion upgrade of U.S nuclear weapons (that continues under Trump). They disarmed their followers, who, in any case, wished to look the other way. Out of sight and out of mind, Obama/Biden continued the “war on terror” with drones, private militias, color revolutions, etc. They waged war on six-seven – who knows how many – countries.

An exception to the more secretive wars was the Obama administration’s openly savage assault on Libya in 2011 under the lies of an imperial moral legitimacy. In order to save you, we will destroy you, which is what they did to Libya, a country still in ruins and chaos.  Their equally blood-thirsty Secretary of State Hillary Clinton let the cat out of the bag when she laughed and gleefully applauded the brutal murder of Libya’s leader Moammar Gaddafi with the words: “We came, we saw, he died.” Yippee!

After Libya was destroyed and so many killed in an illegal and immoral war financed with $2 billion dollars from the America treasury, Joseph Biden bragged that the U.S. didn’t lose a single life and such a war was a “prescription for how to deal with the world as we go forward.”

Biden was Obama’s front man on Iraq, the war he voted for in 2003, and wrote an op ed article in 2006 calling for the breakup of the country into three parts, Shia, Sunni, and Kurdish.

When Obama launched 48 cruise missiles and more than ten thousand tons of bombs on Syria in 2016, killing over a hundred civilians, a third of them children, V.P. Biden stood proud and strong in support of the action.

When the U.S. launched the bloody coup in Ukraine in 2014, Biden was of course in agreement.

But we are told that Trump and Biden are arch-enemies. One of them wants war and the other wants peace.

How many Americans will vote for these clowns this year? They are really front men for The Umbrella People, the money people who use the CIA and other undercover forces to carry out their organized crime activities.

As C.S Lewis said in his preface to The Screwtape Letters:

The greatest evil is not now done in those sordid ‘dens of crime’ that Dickens loved to paint . . .. But it is conceived and ordered (moved, seconded, carried, and minuted) in clean, carpeted, warmed, and well-lighted offices, by quiet men with white collars and cut fingernails and smooth-shaven cheeks who do not need to raise their voice.

In the 2016 presidential election, Hillary Clinton and Donald Trump received 129 million votes out of 157 million registered American voters eager to believe that this system is not built on imperial war making by both parties.

Perhaps that’s a generous assessment. Maybe many of those voters believe in the U.S.A.’s “manifest destiny” to rule the world and wage war in God’s name.  I hope not. But if so, you can expect a big turnout on November 3, 2020.

In any case, It’s quite a circus, but these clowns aren’t funny.  They are dangerous.

“But where are the clowns?
Quick, send in the clowns
Don’t bother they’re here”

Distinguished author and sociologist Edward Curtin is a Research Associate of the Centre for Research on Globalization.