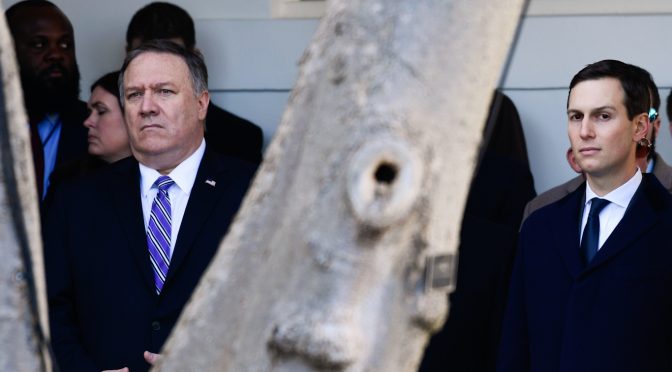 Secretary of State Mike Pompeo and Trump adviser Jared Kushner are hitting the road in an attempt to strong-arm more Arab states into normalizing relations with Israel, turning their backs on Palestine and isolating Iran.

U.S. Secretary of State, Mike Pompeo and unelected advisor to President Donald Trump, Jared Kushner, are embarking on a tour of the Middle East beginning with a stop in Israel to discuss “regional security issues related to Iran’s malicious influence” with Prime Minister Netanyahu, followed by visits to Sudan, Bahrain and now official U.S. partner, the United Arab Emirates.

Spun as an effort to speed up a U.S.-brokered “normalization” between Arab countries and Israel, the trip comes just four days after the White House sent the Secretary of State to the U.N. Security Council with the message that all UN sanctions against Iran were to be restored; invoking a clause in the Iran nuclear deal “that allows participants to reimpose UN sanctions on Iran.”

Critics of the move have deemed it illegal, not only because the Trump administration itself withdrew from the deal it is now attempting to enforce, but also because the UN Security Council had previously voted to allow the arms embargo to expire in the fall.

As Pompeo and company land in Jerusalem, tensions are high in the region. Sudan, one of the countries on the itinerary, is in political disarray nearly two years after the ouster of longtime President Omar al-Bashir in 2018. In July, Sudanese Prime Minister, Abdalla Hamdok, replaced seven senior cabinet officials, including the ministers of finance, foreign, energy, and health.

Five days ago, he sacked his official spokesperson for disclosing ongoing talks with Israel during a press conference in which spokesman Haider Badawi said he was “looking forward to concluding a peace agreement” with the apartheid state.

The Sudanese government immediately disavowed Badawi’s comments, asserting that “no one tasked [the spokesman] with making statements on this matter.”

Meanwhile, Israeli Intelligence Minister Eli Cohen has reportedly confirmed talks with Sudan, adding that “Israel hopes to reach a peace agreement that includes the return of Sudanese refugees to their country,” according to the Al-Ittihad newspaper. Israeli officials have also claimed that Netanyahu himself met with the head of Sudan’s transitional government in Uganda last February for a top-secret meeting to discuss normalizing relations.

Bahrain, a long-time Atlanticist client state, is also on Pompeo’s diplomatic schedule. The tiny Gulf state of fewer than two million people has played host to the U.S. Navy since 1947 and was the headquarters for the British protectorate of the lower Persian Gulf after World War II. The crown prince of Bahrain, Salman bin Hamad bin Isa Al-Khalifa descends from a long line of Al-Khalifas to rule the nation under Britain’s neo-colonial eye and, later, as a sovereign country since 1971.

Considered a “strong security partner” by the U.S. and host of the only operating American naval base in the region with 7,800 U.S. troops, the Trump administration recently lifted arms sales restrictions imposed by Obama. Another member of the Al-Kahlifa clan, Foreign Minister Shaikh Khalid Al-Khalifa, sat down for an interview with The Times of Israel last summer in which he said he “hoped to visit Israel, when it’s all open, peaceful,” signaling Bahrain’s openness to facilitate normalization between Israel and Arab states.

A report updated in June by the U.S. Congressional Research Service (CSR) titled “Bahrain: Unrest, Security, and U.S. Policy,” outlined the country’s human rights record and history of political repression, which should nevertheless be overlooked because the country “has long presented a policy dilemma for the United States because Bahrain is a longtime ally that is pivotal to maintaining Persian Gulf security.”

The policy dilemma is limited to whether or not Bahrain, Sudan or any other oil-rich countries wish to abide by Atlanticist dictates for their particular region, which has now shifted to a policy of exclusion of the Palestinian people living under the apartheid regime in Israel and an intensification of the campaign of isolation against Iran.

This is being called normalization and some, like Sudan’s former government spokesman, see nothing wrong with it. In what may be the most disingenuous statement ever made, Haider Badawi told Sky News Arabia that Sudan “shall be able to build an exemplary peace deal to all our neighboring countries in the region, so that they are able to follow our footsteps and do the same with Israel. I would like to note here that even Palestinians have had a long history of diplomatic ties with Israel. So, why should it be right for them and considered wrong for us.”

Pompeo will finalize his trip in the UAE, where he will meet with Foreign Minister Abdullah bin Zayed Al-Nahyan to discuss the deal signed with Israel a few weeks ago. Jared Kushner’s itinerary, however, has not been made public. He will be accompanied on an ostensibly separate excursion by National Security adviser, Robert O’Brien and special envoy for Iran, Brian Hook in what is only being described as “talks with leaders in the region to encourage more Arab countries to follow in the UAE’s footsteps and move forward with full normalization of relations with Israel.”