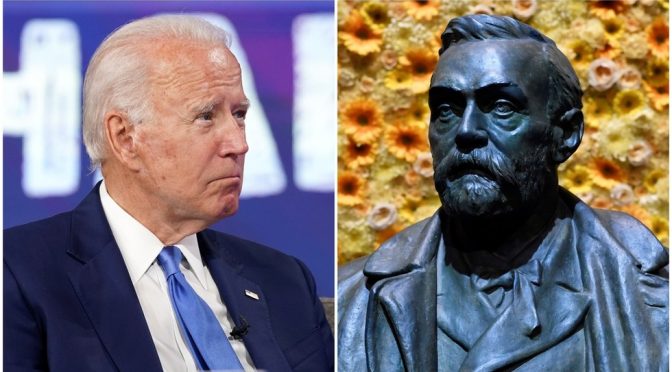 The supposedly “experts” in the field of Science have thrown their support to the senile and creepy Democrat presidential candidate, Joe Biden, which should speak a lot more about how they’ve earned their prestige and honor as Nobel laureates, in the first place.

Dozens of Nobel Prize winners have signed a letter endorsing Democratic presidential candidate Joe Biden, praising the ex-VP’s track record of doing what he’s told by experts – an asset they say has never been more important.

Hailing not only Biden’s “willingness to listen to experts,” but his “understanding of the value of international collaboration in research” and his “respect for the contribution that immigrants make to the intellectual life of our country,” 81 laureates in physics, chemistry and medicine lent their names to the open letter, published Wednesday, endorsing the Democrat as president.

“At no time in our nation’s history has there been a greater need for our leaders to appreciate the value of science in formulating public policy,” the letter stated, presumably in reference to the coronavirus pandemic. The endorsement initiative was masterminded by Democratic Rep. Bill Foster (Illinois), the only physicist in Congress, according to an anonymous source cited by CNN.

A handful of signatories elaborated on their support for Biden in conversation with the outlet. 2006 chemistry Nobelist Roger Kornberg praised the candidate’s “pro-science agenda” and “profound admiration for science and truth,” while 2009 medicine laureate Elizabeth Blackburn claimed Biden would “listen to the scientific and medical community to create solutions that will finally get us out of this deadly pandemic.”

Biden’s rival, President Donald Trump, has come under fire from the scientific establishment for refusing to bow to their consensus on Covid-19. However, that consensus has shifted dramatically over the course of the outbreak on issues from mask-wearing, to drug treatments, to the ability of asymptomatic carriers to transmit the virus, and varies significantly from country to country.

While the Nobelists hailed Biden’s “science-based approach,” the actual science behind many of the candidate’s ‘solutions’ to the pandemic – like a three-month nationwide mask mandate – is dubious at best, and his proposal for free Covid-19 testing for all Americans is only as good as the accuracy of the tests. The PCR test, still considered the “gold standard” for Covid-19 diagnosis, was not meant to be used for diagnostic purposes at all, according to its inventor (ironically, another chemistry Nobelist, Kary Mullis, who passed away last year before he had the opportunity to endorse Biden), and returns incorrect results upwards of 30 percent of the time. Antibody tests don’t show whether an infection is current, merely that a person has had the disease at some point; while fast-acting antigen tests have also come under fire for giving incorrect results, including to Ohio Governor Mike DeWine.

Covid-19 is far from the only issue on which Trump has run afoul of the scientific consensus, however. The president’s refusal to accept the establishment view on climate change led him to pull the US out of the Paris Climate Accords last year, driving environmentalists to brand him a threat to the planet. Biden’s own conversion to ‘green’ energy cheerleader is recent and has come with its fair share of backsliding, as when he flip-flopped earlier this week on a promise to ban fracking, but Green New Deal supporters have embraced him as a lesser evil.

This alone proves that all institutions are intertwined to form a singular mechanism for totalitarian control. This should discourage the revolutionary to continue pursuing for a meaningful change.

But what is there left to do than resist fascism in all its forms with more creativity and Real Science?

One thought on “Biden Gets Endorsements from 81 Nobel Laureates”