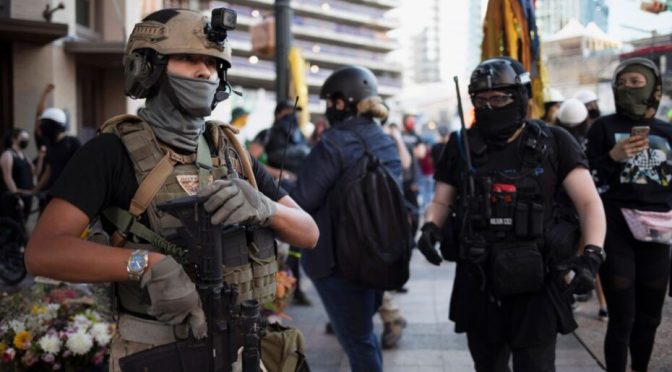 The only benefit from the rise of neo-fascist leaders in heretofore democratic nations is that the various fascist, neo-Nazi, racial and religious supremacists, and far-right terrorists have reared their ugly heads to the degree where it is now easier to identify them and their circle of contacts and organizations.

When the United States, Brazil, Colombia, Poland, Turkey, and other similarly afflicted nations return to political normalcy, the forces of the far-right, already self-identified, can be rolled up, stripped of their weaponry and access to the Internet as threats to public safety.

These resurgent Nazis can also be subjected to ridicule and shamed by the general public to the point where they recede from politics and return to their subterranean lairs or be prosecuted and imprisoned for their crimes, which include mass murder and other acts of terrorism.

A proper template for dealing with dangerous neo-Nazis and fascists is found in the de-Nazification program of the Allies following World War II. Found in the written and oral records of the post-war Nuremberg Tribunal are exemplar legal opinions regarding the dangers posed by Nazis and their fascist ilk to society and humanity.

The officials of the Donald Trump regime – a regime because from its very outset it forfeited any rights afforded to a legitimate government – should heed the words of wartime President Franklin Delano Roosevelt, when he said, “They [the Nazis] shall have to stand in courts of law . . . and answer for their acts.”

Bannon’s co-conspirators include far-right politicians in Italy, Brazil, Belgium, Germany, France, and Austria who have conspired to incite right-wing mob violence and even political assassinations like that of Walter Lübcke, the Christian Democratic Union (CDU) mayor of Kassel in Hesse, and close ally of Chancellor Angela Merkel.

That assassin was a member of the National Socialist Underground, a part of a trans-European neo-Nazi network. The same group has targeted Henriette Reker and Andreas Hollstein, the mayors of Cologne and Altena, respectively, for assassination.

The interior ministries of several nations have pressed their counterparts in the U.S. Department of Homeland Security and Justice to curb U.S. neo-Nazi groups that are actively exporting their beliefs abroad and providing fellow travelers with social media support.

Neo-Nazi groups in the U.S., for example the Boogaloo Bois and Proud Boys, have nurtured the establishment of similar groups abroad: the Lads Society in Australia and the Sonnenkrieg Division in the United Kingdom.

In the United States, the findings of a 2006 Federal Bureau of Investigation report, which stated that U.S. police ranks were being infiltrated by neo-Nazis and white supremacists, have now borne fruit, with police conducting systematic extrajudicial executions of racial minorities.

Neo-Nazis and white nationalists have found sympathizers embedded in the upper echelon of police ranks, particularly in the leadership of police unions. Unions like the Fraternal Order of Police and Sheriff Benevolent Associations are nothing more than racketeering protection rackets that serve to protect racist cops and shake down city and town councils, as well as mayors, for bloated taxpayer-provided expenditures to police departments.

There are also a growing number of Nazis embedded inside the Republican Party. A Republican candidate for the U.S. House of Representatives from North Carolina, Madison Cawthorn, posted on Instagram a photo of himself in 2017 standing outside of Adolf Hitler’s vacation house in the Bavarian Alps. Cawthorn referred to Hitler as “the Fuhrer” and wrote that standing at the “Eagle’s Nest” lair was one of the highlights of his life. Cawthorn may end up in the U.S. Congress with others who have espoused white nationalist views, including Republican candidates in Georgia and Colorado.

Neo-Nazi and fascist terrorists should be classified in the same category used in the de-Nazification of Germany. The Allies referred to such loyal Nazi functionaries as “Belastete,” defined as those burdened with Nazi guilt. Such Nazi activists were subjected to immediate arrest and imprisonment for up to ten years.

On May 22, 2020, the State of New Jersey’s Office of Homeland Security and Preparedness issued a stark warning on the threat posed by neo-Nazis and white nationalists. In a report titled, “Online Extremists Exploit COVID-19 to Inspire Supporters,” the office warned, “White supremacist extremists are taking advantage of the COVID-19 pandemic to advocate for the theory of accelerationism.

The theory states that participating in mass attacks or creating other forms of chaos will accelerate the imminent and necessary collapse of society in order to build a racially pure nation. A neo-Nazi media group that promotes this theory has encouraged supporters to incite panic while people are practicing social isolation during the COVID-19 outbreak, which includes discharging firearms in cities and putting bullet-sized holes into car windows.”

Rather than receive condemnation by Donald Trump, he, his administration, and his Republican supporters in Congress and in state capitals around the United States, provided moral support to such far-right terrorist groups through their verbal statements and tweets.

In 2017, Trump praised as “fine people” Nazis and Ku Klux Klan members who took part in a torchlit parade in Charlottesville, Virginia to mark the “Unite the Right” rally. Trump effectively sent a message to neo-Nazis, white supremacists, and others of the far right that they had his full support.

Trump has consistently supported such far-right fringe groups, including the Covid-19 anti-lockdown armed militias that have threatened physical violence on the governors and members of the state legislatures of Michigan, Ohio, New Hampshire, and Idaho.

In 2019, after a white supremacist massacred worshipers at two mosques in Christchurch, New Zealand, Trump, who had attempted to impose a travel ban on all Muslims entering the United States, tweeted: “My warmest sympathy and best wishes goes out to the people of New Zealand after the horrible massacre in the Mosques. 49 innocent people have so senselessly died, with so many more seriously injured.

The U.S. stands by New Zealand for anything we can do. God bless all!” Based on Trump’s hate-filled rhetoric, he has shouldered as much responsibility for the Christchurch attack and others like it around the world, as the actual shooters.

Another template that serves as an example of how to cleanse a nation’s government of far-right extremists and human rights violators is found in post-military dictatorship Argentina. There, democratic administrations and the independent judiciary have sought to bring to justice members and supporters of the military junta that murdered some 30,000 citizens during the “Dirty War” of 1976 to 1983.

After the ouster of the military junta, a National Commission on the Disappearance of Persons (CONADEP) began an investigation of the crimes committed by junta officials against the citizens of Argentina. The commission’s report, issued in 1985, was titled, “Nunca Más” (“Never Again”).

Many of the perpetrators of the “Dirty War” remain in prison today. Nations currently beset by terrorism carried out by neo-Nazi and fascist groups should look to the creation of a body similar to CONADEP to purge their respective societies of the scourge of Nazism, once and for all.

The world must dial back to the days when fascists were humankind’s common enemy.

Wayne Madsen is an investigative journalist, author and syndicated columnist. A member of the Society of Professional Journalists (SPJ) and the National Press Club