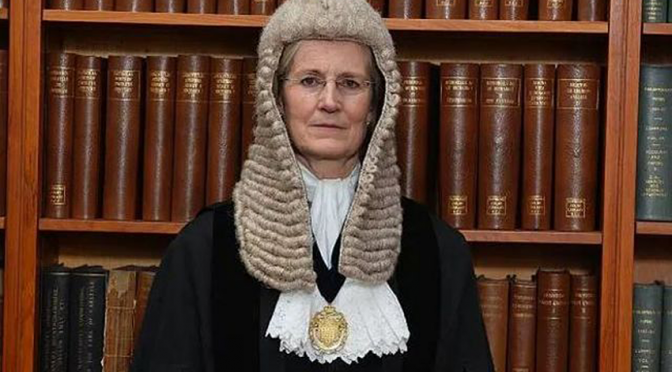 Emma Arbuthnot is the chief judge who conducted the trial for the extradition of Julian Assange in London to the USA, where a 175 year prison sentence awaits him for “espionage,” that is, for having published evidence of US war crimes, including videos of civilians’ killings in Iraq and Afghanistan, as an investigative journalist. At the trial, assigned to Judge Vanessa Baraitser, every defense request was denied.

In 2018, after Sweden’s sexual assault charges fell through, Judge Arbuthnot refused to cancel the arrest warrant, so that Assange could not obtain asylum in Ecuador. Arbuthnot rejected the United Nations Working Group’s findings on the arbitrary detention of Assange. The UN Officer’s remarks against torture also went unheard:

“Assange is detained in extreme conditions of unjustified isolation, and shows the typical symptoms of prolonged exposure to psychological torture.”

In 2020, while thousands of detainees were transferred to house arrest as an anti-Coronavirus measure, Assange remained in prison, exposed to the infection in compromised physical condition.

In court, Assange cannot consult with lawyers, but is kept isolated in an armored glass cage, and threatened with expulsion if he opens his mouth. What is behind this persistence?

Being Lord James Arbuthnot’s wife, married to a well-known Tory “hawk,” former Minister for Defense Procurements, linked to the Military-Industrial Complex and to the Secret Services, Judge Arbuthnot has the title of “Lady.” Lord Arbuthnot is, among other things, Chairman of the British Advisory board of Thales, a French multinational specialized in aerospace military systems, and a member of Montrose Associates, specialized in Strategic Intelligence (highly paid positions).

Lord Arbuthnot is also part of the Henry Jackson Society (HJS), an influential transatlantic think-tank linked to the US Government and Intelligence Agency. Last July, US Secretary of State Mike Pompeo spoke at a round table of the HJS in London: since he was the CIA Director in 2017, he accused WikiLeaks, founded by Assange, of being “an enemy spy service.”

The Henry Jackson Society led the same campaign accusing Assange of “sowing doubts on the moral position of Western democratic governments, with the support of autocratic regimes.” Ms. Priti Patel, current United Kingdom Secretary of the Interior, who is responsible for the extradition order of Assange was until recently on the political board of the HJS, alongside Lord Arbuthnot.

Lady Arbuthnot is essentially connected to this pressure group that is conducting a pounding campaign for the extradition of Assange, directed by Lord Arbuthnot and other influential characters. She was appointed by the Queen as chief magistrate in September 2016, after WikiLeaks published the most compromising documents for the USA in March.

These documents included emails from Secretary of State Hillary Clinton revealing the true purpose of the NATO war on Libya: to prevent Libya from using its gold reserves to create a pan-African currency alternative to the dollar and the CFA franc, the currency imposed by France on 14 former colonies.

The real “crime” for which Assange is being tried is that of opening cracks in the political-media silence wall that covers the real interests of powerful elites who, operating in the “Deep State,” play the war card. It is this occult power that subjects Julian Assange to a trial, instructed by Lady Arbuthnot, who recalls those of the Holy Inquisition as to how the accused is treated.

If Assange is extradited to the US, he would be subjected to “special administrative measures” much harsher than those in Britain: he would be isolated in a small cell, unable to contact his family or speak, not even through lawyers who would be indicted if they brought forth his message. In other words, he would be sentenced to death.

One thought on “Who is Behind the Judge Who is Trying Julian Assange?”