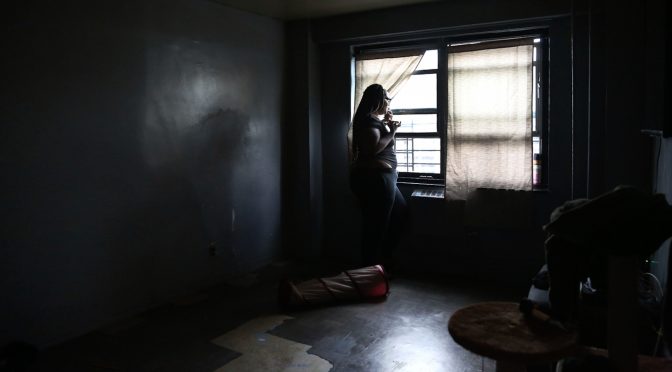 With threats of homelessness and bankruptcy in the air as the eviction moratoriums subside, both renters and small landlords are getting pinched by predatory tech capitalism as the gig-economy hits the real estate market.

In 2014, former Blackstone and Goldman Sachs investment banker Ryan Williams got together with his “college buddy,” Joshua Kushner – Jared’s brother – to form a real estate investment platform they called Cadre.

Cadre sought to disrupt the real estate industry in the wake of the 2008 subprime mortgage crisis by tinderizing property deals through a tech platform that brought investors and sellers together.

According to Williams, whose other investors include George Soros and Peter Theil, Cadre’s mission is “to level the playing field in an industry that is often tilted toward the biggest players” by taking an “offline” industry online and making it “transparent.”

A pre-Covid initiative to capitalize on its platform came in the form of the so-called “opportunity zones,” that Jared Kushner directly lobbied for inclusion in Trump’s 2017 Tax Cut and Jobs Act, billed as a funding mechanism to help poor and distressed communities, which turned into a multi-billion-dollar land heist by the wealthiest Americans, like the Kushner family. The pandemic lockdown protocols forced Cadre to downsize, laying off 25 percent of its workforce in March.

But now, the company is restarting its predatory engines as the home eviction wave forming on the horizon signals potential windfalls for companies like Cadre, that are in a position to profit. It is doing so by launching a pop-up banking operation called “Cadre Cash,” which will try to lure deposits from “investors” by offering a three percent annualized “reward” to finance a new round of land-grabs as millions of Americans teeter on the edge of homelessness and landlords look to unload un-rentable properties.

Another company, Civvl, is tackling a different side of the burgeoning housing crisis in America with its on-demand service model for eviction crews. Just like Uber, the Civvl app lets “frustrated property owners and banks secure foreclosed residential properties” by connecting haulers and the rentier class.

Civvl’s parent company, OnQall, specializes in mobile app platforms that monetize side-hustles like moving, cleaning and lawn care services. The eviction crew app has, predictably, drawn a storm of criticism since Motherboard‘s article on Civvl this past Monday.

“It’s fucked up that there will be struggling working-class people who will be drawn to gigs like furniture-hauling or process-serving,” exclaimed housing activist Helena Duncan, who also pointed out the clear dystopian contours evident in a scenario where working class people are paid to wage economic warfare on fellow working class people.

Civvl puts up a disingenuous defense against the earned invectives, comparing itself to Monster.com. “They’re not evicting anyone,” a Civvl spokesperson told Motherboard, “they’re just the help.”

Both Cadre and Civvl are poised to make a killing as eviction moratoriums abate across the country and millions find themselves on one side or another of evictions – tenants forced onto the streets by small landlords who will have little choice but to sell in a depressed market.

Only the CDC’s national eviction moratorium, issued three weeks ago, stands in the way of the avalanche of displacement and dispossession at our doorstep. But, even the risks of fines and jail time doesn’t seem to be discouraging companies like OnQall or landlords, in general.

Cadre, in particular, is at the head of the pack of “disruptive” real estate tech platforms mostly due to the favor it enjoys in the halls of the Trump administration. “Jared was one of the key people early on. And his contributions were critical,” says Cadre CEO Ryan Williams of Jared Kushner, whose stake is worth over $50 Million, according to 2018 SEC filings.

Despite claims that Kushner sold a “substantial portion” of his shares in the company and that the president’s son-in-law has no role in the business endeavor, recent history surrounding the so-called “opportunity zones” of Trump’s Tax bill revealed Cadre’s and Kushner’s central role in a multi-billion dollar land heist by the wealthiest Americans, like the Kushner family.

Paying lip service to the same “diversity” principles Cadre’s African American founder asserts underlie his company’s vision, the more than 200 federally-designated “opportunity zones” for disadvantaged communities that resulted from the legislation, Cadre’s machine-learning and processed census data was simply serving to make a “ridiculous loophole” available to wealthy investors to buy up land at a serious discount.

The bulk of the opportunity zone funding, some of which was set up by William’s former employer and Cadre investor, Goldman Sachs, went to high-end real estate development projects in affluent areas, retail developments and luxury hotels, such as Richard Branson’s 225-room hotel in William’s home state of Louisiana, less than two miles away from one of the poorest parts of New Orleans.

The project had been announced by Branson a year before the tax-cut legislation was signed into law, but nevertheless qualified to participate in the opportunity zone program.

Picking up the bodies

The housing catastrophe in the United States is barley gathering steam, and while many landlords and property owners still face legal challenges in cases where eviction moratoriums remain in place, the loose patchwork of laws governing property rights across the nation – not to mention foundational ideology – gives companies like Civvl and Cadre the chance to circumvent these and rely on naked power to drive people away from their homes or convince them to sell it to massive real estate concerns, like CBRE or Kushner’s rich buddies.

Civvl is confident that they can take advantage of people’s lack of knowledge about their rights to make money as the eviction middle man.

Indeed, the company is betting that municipal and federal authorities will see things their way. “This is something that has to be done,” says a company spokesman. “Listen,” he continued, “if someone is killed on the street, someone needs to go pick their body up.”