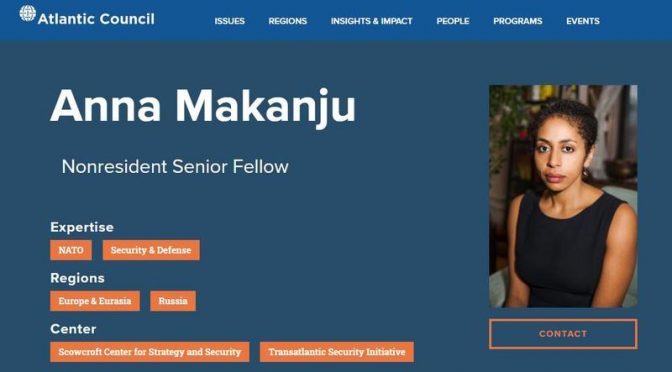 The moment the New York Post reported on some of the sleazy, corrupt details contained on Hunter Biden’s hard drive, Twitter and Facebook, the social media giants most closely connected to the way Americans exchange political information, went into overdrive to suppress the information and protect Joe Biden.

In the case of Facebook, though, perhaps one of those protectors was, in fact, protecting herself.

The person currently in charge of Facebook’s election integrity program is Anna Makanju. That name probably doesn’t mean a lot to you, but it should mean a lot – and in a comforting way — to Joe Biden.

Before ending up at Facebook, Makanju was a nonresident Senior Fellow at the Atlantic Council. The Atlantic Council is an ostensibly non-partisan think tank that deals with international affairs. In fact, it’s a decidedly partisan organization.

In 2009, James L. Jones, the Atlantic Council’s chairman left the organization to be President Obama’s National Security Advisor. Susan Rice, Richard Holbrooke, Eric Shinseki, Anne-Marie Slaughter, Chuck Hagel, and Brent Scowcroft also were all affiliated with the Atlantic Council before they ended up in the Obama administration.

The Atlantic Council has received massive amounts of foreign funding over the years. Here’s one that should interest everyone: Burisma Holdings donated $300,000 dollars to the Atlantic Council, over the course of three consecutive years, beginning in 2016. The information below may explain why it began paying that money to the Council.

Not only was the Atlantic Council sending people into the Obama-Biden administration, but it was also serving as an outside advisor. And that gets us back to Anna Makanju, the person heading Facebook’s misleadingly titled “election integrity program.”

Anna Makanju is a nonresident senior fellow with the Transatlantic Security Initiative. She is a public policy and legal expert working at Facebook, where she leads efforts to ensure election integrity on the platform. Previously, she was the special policy adviser for Europe and Eurasia to former US Vice President Joe Biden, senior policy adviser to Ambassador Samantha Power at the United States Mission to the United Nations, director for Russia at the National Security Council, and the chief of staff for European and NATO Policy in the Office of the Secretary of Defense. She has also taught at the Woodrow Wilson School at Princeton University and worked as a consultant to a leading company focused on space technologies.

Makanju was a player in the faux Ukraine impeachment. Early in December 2019, when the Democrats were gearing up for the impeachment, Glenn Kessler mentioned her in an article assuring Washington Post readers that, contrary to the Trump administration’s claims, there was nothing corrupt about Biden’s dealings with Ukraine. He made the point then that Biden now raises as a defense: Biden didn’t pressure Ukraine to fire prosecutor Viktor Shokin to protect Burisma; he did it because Shokin wasn’t doing his job when it came to investigating corruption.

Kessler writes that, on the same day in February 2016 that then-Ukrainian President Poroshenko announced that Shokin had offered his resignation, Biden spoke to both Poroshenko and Prime Minister Arseniy Yatsenyuk. The White House version is that Biden gave both men pep talks about reforming the government and fighting corruption. And that’s where Makanju comes in:

Anna Makanju, Biden’s senior policy adviser for Ukraine at the time, also listened to the calls and said release of the transcripts would only strengthen Biden’s case that he acted properly. She helped Biden prepare for the conversations and said they operated at a high level, with Biden using language such as Poroshenko’s government being “nation builders for a transformation of Ukraine.”

A reference to a private company such as Burisma would be “too fine a level of granularity” for a call between Biden and the president of another country, Makanju told The Fact Checker. Instead, she said, the conversation focused on reforms demanded by the International Monetary Fund, methods to tackle corruption and military assistance. An investigation of “Burisma was just not significant enough” to mention, she said.

Let me remind you, in case you forgot, that Burisma started paying the Atlantic Council a lot of money in 2016, right when Makanju was advising Biden regarding getting rid of Shokin.

In other words, there’s a really good chance that Sundance was correct when he wrote at The Conservative Treehouse:

That’s right folks, the Facebook executive currently blocking all of the negative evidence of Hunter and Joe Biden’s corrupt activity in Ukraine is the same person who was coordinating the corrupt activity between the Biden family payoffs and Ukraine.

You just cannot make this stuff up folks.

The incestuous networking between Democrats in the White House, Congress, the Deep State, the media, and Big Tech never ends. That’s why the American people wanted and still want Trump, the true outsider, to head the government. They know that Democrats have turned American politics into one giant Augean Stable and that Trump is the Hercules who (we hope) can clean it out.

Authored by Andrea Widburg via AmericanThinker.com